An unusual thing began to happen to the underground comics emerging from San Francisco after their initial first wave in the mid-to-late 1960’s. As the dreams of the revolutionary youth counterculture began to fall apart (signs of which were already beginning to show by the end of 1967 — the year of the “Summer Of Love”), the fading hopes of the generation were seeping into the comics of the time in extremely dark ways. Though those initial undergrounds had some nasty elements in them, mainly stemming from the work of master cartoonist S. Clay Wilson, their narrative content and visual presentation was displayed through a vibrant filter of drugs and free love. As the decade reached its end, the Vietnam War had worsened, pot and psychedelics were being replaced by hard drugs and alcohol, and the style and spirit of the times itself had been appropriated and absorbed by the mainstream media for purely commercial gain. With the very real possibility of grim times ahead, the nature of many underground comics also turned very grim indeed, directly reflecting the world around them. Of all the artists at the forefront of this new wave I can think of none more gifted than the late Greg Irons. 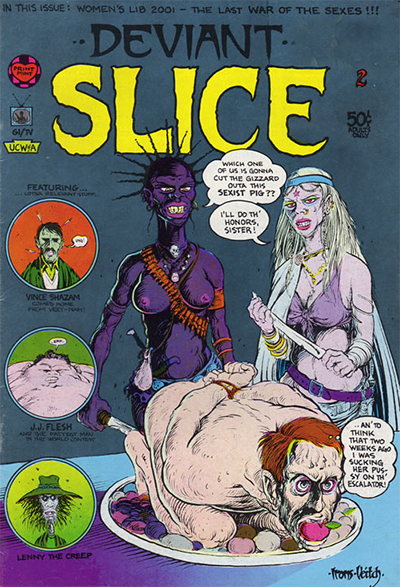 Moving to San Francisco in 1967 at the age of 20, Greg Irons began creating concert posters for Bill Graham Productions that highlighted many of the seminal bands and performers of the era including Jefferson Airplane, Santana, and Moby Grape. Many illustrations commissioned for various underground newspapers and magazines were soon to appear, followed by a brief move to England where he contributed to the Beatles animated film “Yellow Submarine.” It was upon his return to California in 1969 that he began producing the comic work he would become known for.Late 1969 through 1971 saw the starting publications of comics with titles such as “Yellow Dog,” “Skull Comics,” “Slow Death Funnies,” and “Deviant Slice.” These books, which featured many collaborations between Irons and writer Tom Veitch, were filled with mutilation, death, monsters, madmen, governments run amok, and ecological nightmares. An issue like the battle between the sexes would be treated in the most visceral manner possible, be the story firmly rooted in fact or entirely fictional. In the tale “You Got A Point There, Pop!” from “Deviant Slice” #2 a black Amazonian woman and Southern man fight it out in the wasteland that remains as a result of an ongoing global war between men and women. She gets the best of him, ties him to a tree and performs ghastly torture on him in the name of sexual and racial superiority.

Irons would be frequently criticized for the grim nature of his work, but it is important to note that his work was a direct reflection of the spiraling out of control nature of the country in which he lived. Described by many friends as a gentle man (he was a practicing Buddhist) Irons was a firm believer in the cathartic ability of art, for both the creator and the observer, to help defuse the ugliness of the world around us. The often harsh subject matter may be the reason Greg Irons did not receive the same level of recognition or success as many of his contemporaries such as Robert Crumb, Gilbert Shelton, or Robert Williams. I believe this will change greatly as time goes on and I think a key to this happening is the excellent book “You Call This Art?!: A Greg Irons Retrospective” by Patrick Rosenkranz.

Published by Fantragraphics, “You Call This Art?!” is an incredible feast for the eyes and mind.Author Rosenkranz is a walking authority on underground comics and there couldn’t possibly be anyone more suited to compile this tribute to Greg Irons. Very lavishly illustrated and thoughtfully written (with many contributions by those closest to Irons) this is an incredible testament to a frequently overlooked, but very important artist. All areas of his career are covered in detail, not just the material mentioned above, but also work done for children’s books, “Dungeons & Dragons,” and tattoo designs.

Greg Irons was tragically killed in 1984 at the age of 37 after being struck by a bus on a busy street in Bangkok. He was on a trip to visit the old tattoo masters of the Far East. Though I have had the chance to meet many legendary underground comics artists over the years I will always be saddened that I will not have the opportunity to meet Irons, a fearless artist of the highest order.