Comic anthology books are almost always a mixed bag. Though they often revolve around a certain theme, set of characters, or maintain a consistent tone, one cannot help but be either over or under whelmed by its contents. It is very rare to find an anthology that hits the mark on almost every page but the recent release “Typhon” is just that. 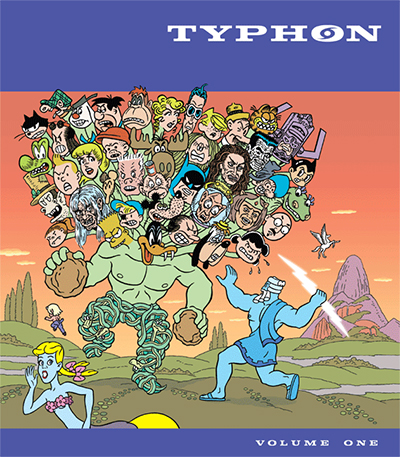 In Greek mythology Typhon was the most fearsome of all creatures, at one time even attempting to destroy Zeus himself. This tale is reflected on the cover of “Typhon” with an incredible illustration by R. Sikoryak of the Disney “Fantasia” version of Zeus fighting it out with a multi-headed creature sporting the visages of pop-culture behemoths ranging from Batman and Tintin to Daffy Duck and Bazooka Joe. This chaotic image is very representative of the work between the covers, contributed by 42 cartoonists from the United States, South America, Canada, and Europe.

The stories represented here prove to be an incredible cross section of the possibilities of comic art in the 21st Century. Genres and art styles make quantum leaps in content and presentation from story to story, but the overall quality of the work itself very rarely dips, if at all. One of the more earth moving shifts occurs when a wordless and beautifully graphic medieval-themed piece is followed by a hilariously filthy story titled “Virgil” about a young nerd who dreams of rescuing a hard-core porn starlet from her own smutty existence. There is also much to be said for seeing a beloved cartoon character such as Droopy (here referred to as “Loopy”) portrayed as a blood–drenched serial killer calmly explaining the joy to be found in butchering his cartoon fellows.

As much of an incredible feast for the eyes and mind as this book is, it is still an anthology and one is bound to like some pieces more than others. A great opening story by Danny Hellman (who is also the books’ editor) about an alien feasting on peep show patrons is followed by “Hail Jeffery,” a beautifully drawn, but on-the-nose story about our petty, child-like leaders and the pain they induce in others.

But the above is an overall very small complaint. An independently published anthology this exceedingly good is rare these days and should not be missed under any circumstances. The $24.99 cover price is a mere pittance for 192 pages of gorgeous, beautifully colored, cutting edge comic art. “Typhon” is published by Dirty Danny Press.