I have to admit that when I was in my teenage years I stayed mostly away from comics. Aside from the occasional issue of “Heavy Metal” or “The Fabulous Furry Freak Brothers” I was pretty much oblivious to the changes that were happening in mainstream comics in the late 1980’s, particularly concerning super heroes. With the advent of “Watchmen” and “The Dark Knight Returns,” caped crusaders became bleak, grim and gritty with nary a cornball remark in sight for a hero to spout while punching out a thug. Of course this was a great thing, highly instrumental in pushing the medium forward, but sometimes I would think to myself, “Why can’t superheroes just lighten the hell up once in a while?” Well, anyone else who wishes for those long-gone, nut ball, comic book days of yesteryear will be mighty pleased with “Comic Book Heaven.” 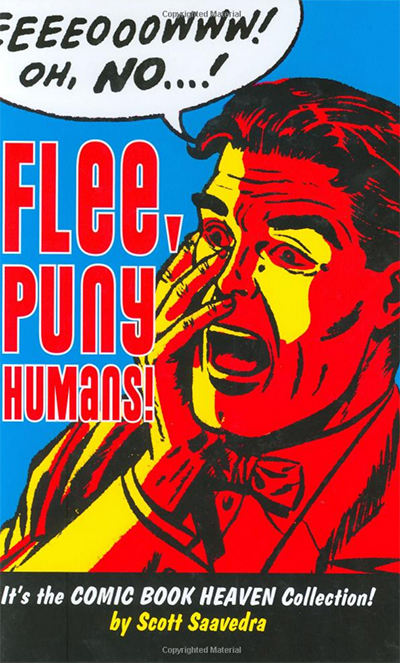 Compiled by Scott Saavedra, “Comic Book Heaven” started life in the mid-1990’s as a self-published ‘zine dedicated to showcasing examples of the most batshit crazy comics of the past with a focus mainly on Marvel and DC titles of the 50’s and 60’s. I am not sure where the creative impulse toproduce such aggressively bizarre comic tales like those found in “Jimmy Olsen” and “Lois Lane” could have possibly come from. Drugs certainly seem, at first, to be a prime suspect especially considering Jimmy’s response (pictured left) to finally getting some attention from the ladies, but somehow I just don’t think this is the case. It’s  also interesting to note that two of the most vanilla characters in the DC universe, Lois Lane and Jimmy Olsen, had the most surreal and ridiculous stories reserved for them. It’s almost as if the creators working on these titles knew that had to deal with these unremarkable characters so they went out of their way to make them as nutty as possible. Consider the cover below and keep in mind that this is relatively normal given that Lois would usually be turned into a monster, infant, black woman, etc…

However, there was plenty of weirdness reserved for the actual heroes as well. Consider the image at left from the “Comic Book Heaven” blog. Apparently the Joker thought that filming a “love scene” between Batman and a goat and turning it into blockbuster movie would be a great way to get revenge on his nemesis. But still, things didn’t always have to be so nutty in the superhero realm to be just as flat out bizarre. Back in the good ol’ 1940’s it was apparently gallant and acceptable hero behavior to shoot a crook point blank in the head. Come to think of it, some of these old characters are a lot more like the “Watchmen” than we give them credit for!

Superhero stories aren’t the only ones singled out by Saavedra in “Comic Book Heaven” though. Horror, war, science fiction and, most entertainingly, romance comics get their fair share of coverage as well. The examples pulled from the love stories are especially hilarious as they contain some of the greatest “unintentionally” smutty moments in all of comics. In one story a woman working behind a diner’s breakfast grill wishes a regular customer would notice her, but laments to herself that he comes there just because he likes “looking at my flapjacks.” Another example is below. Given that I do not have the rest of the story to look at I have no idea what the hell to comment about this one.

The images themselves in “Comic Book Heaven” are only part of the fun, however. The articles, quotes, and photo captions provided by Scott Saavedra are equally hilarious and make the magazine much more than just a collection of bizarre art from the medium’s nearly forgotten past. His comments on the featured comics are laugh-out-loud funny and not at all unlike the brand of comedy one can find in a satirical television show like “Mystery Science Theater 3000.”

More recently “Comic Book Heaven” is published by SLG Publishing. A nifty collection of the earlier issues, titled “Flee, Puny Humans!” was released in 2003 and is still in print. Although it is not really a straightforward comic book, “Comic Book Heaven” is, page for page, the most hilarious thing being put out in the industry today. Though I love the state of the superhero comic today I ask you to remember that there was a time when Batman, the most serious, darkest hero of them all, made out with a goat. And that is some funny shit right there.