Jack Cole will always be remembered primarily as the creator of the ever-malleable “Plastic Man,” one of the few characters from the Golden Age of comics that is still popular today, but what many mainstream fans may not be aware of is the gorgeous pin-up art Cole created for “Playboy” magazine during the early years of its run. As Cole looked to expand his career beyond comics in the early 1950’s (“Plastic Man” being primarily ghosted by other artists and writers at this point) he sought work in the magazine field. After numerous rejections he found work in the Humorama line of gags and girlie magazines. Here he supplied the publisher with beautiful illustrations of women in risqué situations rendered in lush black and white ink washes.  This work was signed under the pseudonym “Jake,” but any anonymity Cole may have felt he needed at the time was not going to be required for long.

Jack Cole’s first appearance in the pages of “Playboy” would be in 1954 with the magazine’s fifth issue. He would very quickly become the premiere cartoonist in Hugh Hefner’s publishing sensation, setting a style and standard for the magazine that basically is still followed to this day. Hefner, twelve years younger than Cole, was a fan of “Plastic Man” yet was unaware at first that the man who drew that bizarre early hero, and the new star in his artistic stable, were one and the same. Cole’s beautiful women soon became part of the visual identity of the magazine itself, an identity that Hefner worked closely with the artist in establishing. So popular were his supremely feminine creations that the second ever licensed piece of “Playboy” merchandising was a set of 36 cocktail napkins titled “Females by Cole,” each sporting a small line illustration of a woman and reflecting a different nature of a woman’s personality. 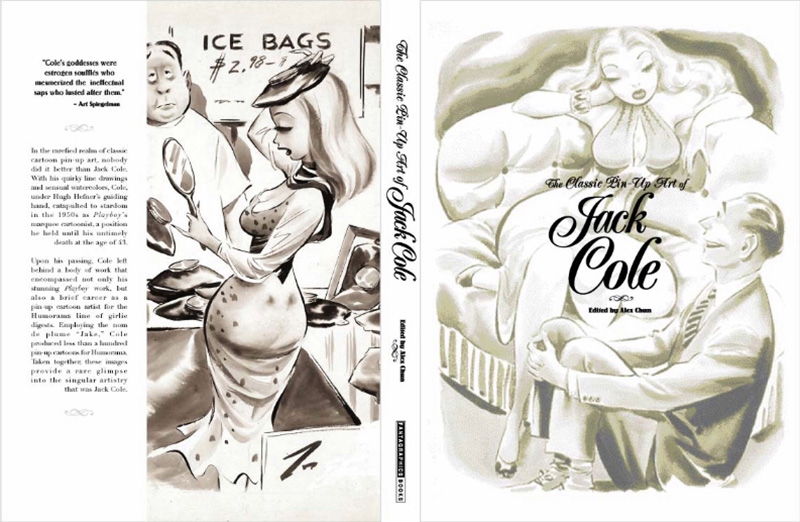 Cole would go on to contribute at least a single piece to every issue of “Playboy” for the remainder of his far too brief life. In 1958, at the height of his professional career, Jack Cole committed suicide. The day before the event, the artist put two letters in the mail, one to his wife and the other to Hefner. The one to his editor and friend reads like an apology. The letter to his wife was of a much more personal nature and was never publicly disclosed, leaving the exact motive for his taking his own life a mystery.

Jack Cole’s good-girl art can be found in a beautiful volume from Fantagraphics titled “The Classic Pin-Up Art Of Jack Cole.” The book is to be reprinted in a soft cover edition this upcoming November. The out-of-print “Jack Cole and Plastic Man: Forms Stretched To Their Limits” centers primarily on the classic superhero, but also has a very generous amount of Cole’s gag cartoons and “Playboy” work, and even features the suicide note sent to Hefner. Both books are highly recommended, essential reading for anyone interested in classic comics, American illustration, pin-up art, or mid-century American pop culture.