I really have no good, justifiable reason why I’ve never attended Comic-Con until this year. Growing up in the mid-west certainly makes the commute difficult, but now that I’ve lived on the west coast for 11 years (and the last 6 of those years in Southern California) it really makes no sense why I’ve waited until now to go. However, all that changed this year and I can now safely say I will never miss one again. What follows is a rundown of just a few of the notable people, places and things at the massive sensory overload that is the 2009 San Diego Comic- Con. 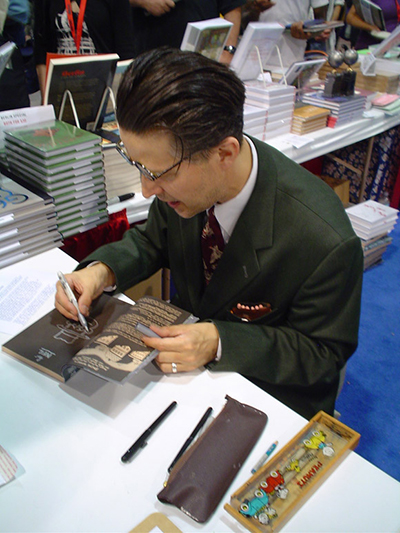 As I attended just on Saturday I only saw a fraction of the tables in the main exhibit hall, but I still managed to hit up most of my favorites. Over at the Fantagraphics table Johnny Ryan, smutty punster extraordinaire, was there with his recent release “Prison Pit.” Also on hand were the Hernandez brothers (Jaime, Gilbert and Mario) of “Love and Rockets” fame. In a family whose well of cartooning talent is utterly inexhaustible it is not surprising that Gilbert’s young daughter Natalia was there with a comic of her own. With a master storyteller like Gilbert for a father she is practically predestined to be one of the next generation of indie greats. Premiering from Fantagraphics at the show is the next issue (#299) of “The Comics Journal” whose main feature concerns what is perhaps the greatest (yet unpublished) comics collection in the entire history of the medium. This aborted project was so stupendous that it will have its own “Sequential Sunday” column in the near future.

At the Drawn & Quarterly table, Seth, who had to easily be the most fashionably dressed person at the whole convention, signed and sketched for fans alongside absurdist cartooning master R. Sikoryak who was there with his new book “Masterpiece Comics.” This is another item I picked up on Saturday and also needs a column of its own to explain just how great (and laugh out loud funny) it is. He was also gracious enough to draw “Mephistofield” for me inside the book. “Mephistofield” is just the cutest little satanic, soul-devouring, feline bastard you’ll ever see.

Speaking of cute, over at the Top Self tables, Andy Runton’s “Owly” character was having it’s first ever animated short debut at the con. This two minute CG piece was produced by the animators behind the “Final Fantasy: The Spirits Within” feature film, an unlikely match-up, but one that had everyone nearby frozen in their tracks by the sheer power of its own adorableness. Also there to meet fans was Top Shelf superstar/nice guy Jeffery Brown. In addition to his numerous books he also had a neat-o selection of ink sketches of 1980’s cartoon characters for sale. I had to pick up the drawing of Diana from the short-lived “Dungeons & Dragons” series, a big favorite of mine from back in the day.

Of course there is much more than comics to be bowled over by at Comic Con and I was really struck by the “Hellboy” statue, sculpted by Pete Jirles, at the Mindzeye Studios table. Although there have been many 3D representations of Mike Mignola’s famous creation I haven’t seen any that captured the character and his world as well as this one.

Add to the above massive movie displays, avalanches of anime, and costumed fans of every flavor and it all adds up to one extremely fun and extremely exhausting day.