With Halloween right around the corner and all the spooky connotations that come with it hanging in the air it seemed like a good time to scour the shelves of my favorite comic book store for some seasonally appropriate material. The store in question is Comics Factory in Pasadena, CA where, if you’re an indie reader like me, you’re in luck as their selection of independents is so wide it almost rivals all the stock of the Big Two put together. Another huge plus for my ghoulish spree is that there seems to be more horror comics on the shelves now than we’ve seen in many, many years. In fact horror, across all avenues of media, is much more prominent both in the public eye and on the pop culture radar than it was in the 1990’s. Many cite that the boom is a direct reflection of the troubled times we are living in (consider the horror films of the 70’s and what was happening in the country then) but I’m not interested in social commentary at the moment. I’m after rip-roaring, blood spurting, monster mashing, supernatural mayhem and the following titles are the best that I found. First up: zombies!

In The Dead: Kingdom of Flies humanity (of the living British variety) is facing extinction as hordes of the deceased begin to rise and feast on their tasty bits. A group of firefighters find themselves holed up at their station, along with two soldiers, as the world beyond their walls quickly falls to pieces. Writer Alan Grant keeps things moving at an appropriately brisk pace with help from artist extraordinaire Simon Bisley, Grant’s collaborator on the much loved early 90’s Lobo mini-series.

The only negative thing to be found here actually has nothing to do with the title itself which is a very entertaining read. It’s more that the zombie genre has really reached a saturation point by now making it hard to offer up anything new on the “small group of the uninfected struggling to survive” theme. However, Grant does manage just that by adding genetic mutation to the mix. Plus, the absolutely wicked cool covers by Glenn Fabry make this a title that is near impossible to pass up. Four issues are presently available or look for the collected edition that is due to be released this month. 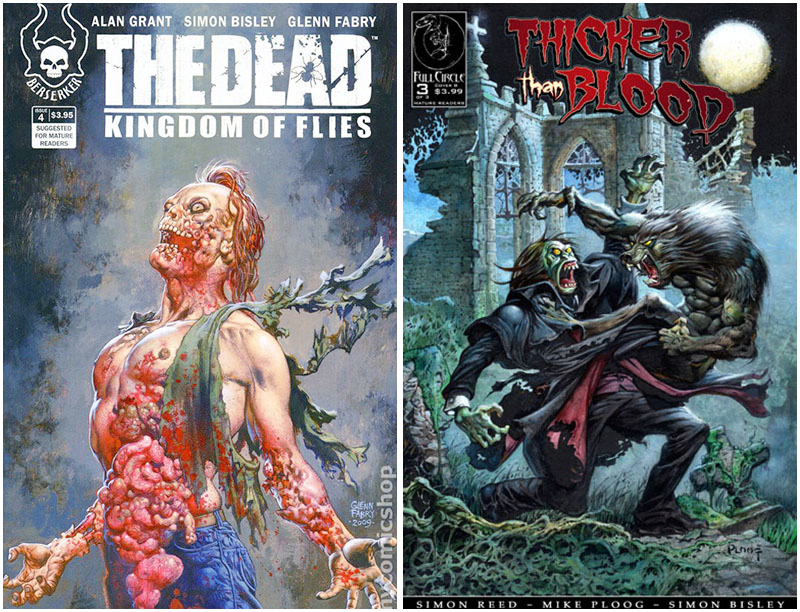 This one is a huge treat for horror fans as it marks the return to the genre after many, many years by comic art master Mike Ploog.

Ploog worked on numerous Marvel horror titles in the 70’s including Man-Thing, Ghost Rider, Werewolf By Night and The Monster of Frankenstein as well as Warren magazines like Creepy and Vampirella. To have him apply his incredibly stylized and mood drenched pencils and inks to a mini-series featuring not only a werewolf, but a tormented Jekyll/Hyde character as well, you know this is going to be something great. Top it off by having Ploog’s art fully painted by Simon Bisley (Bisley again!) and you’ve got one of the very best looking series of the year.

Though the incredible art will attract readers much credit should be given to Simon Reed for his story. This tale of two brothers, each afflicted in their own way and doomed to change into monstrosities, is a very human one that says much of the bond between family members even while the family itself is falling apart. This is a horror story in the grand tradition that is also not afraid to let the red flow freely when needed. One of the best books I’ve seen this year.

A very different kind of supernatural story from the others above, but one no less eerie, is found in Beasts of Burden issue one (of four) by Evan Dorkin & Jill Thompson. Originally appearing in four Dark Horse anthologies, our cast of characters, a group of adventurous dogs (and one cat) find themselves often caught up in ominous occurrences in the tranquil area in which they live. In this particular tale a rain of frogs foreshadows dangerous times ahead, not the least of which is one huge, pet-eating toad found by our heroes deep in the woods.

Though in interviews Dorkin and Thompson seem very humble in speaking about creating the special little world in which the Beasts of Burden cast lives in, I think they may be selling themselves short as to the greatness of what they’re accomplishing with these stories.By assigning the characters well defined “human” personalities yet not giving them cartoony physical abilities beyond their animal means (walking on hind legs, using writing instruments, etc…) the reader is all the more willing to believe, and have an emotional investment in, what’s happening. This coupled with the fact that the animals are often in dangerous situations, supernatural or not, only heightens the emotional response from the reader. Thompson’s beautiful art makes the animals every bit as adorable as their real-world counterparts, but that is no guarantee they will make it to see the end of the story. This is not The X-Files with cute animals. This is Watership Down with ghosts. 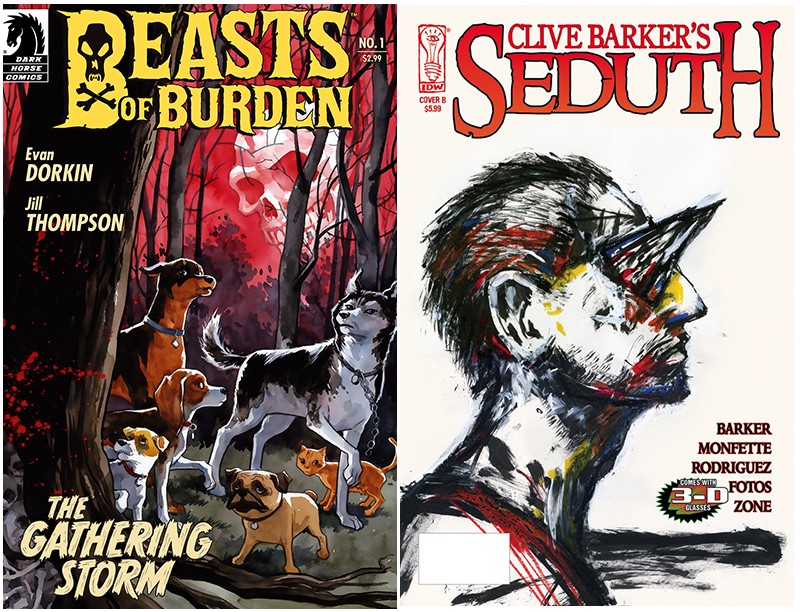 The last comic I’d like to mention is also the grisliest: Clive Barker’s Seduth.

Much of Barker’s output is highlighted by his highly original, intensely surreal concepts that are put into the goriest of services and Seduth certainly fits the mold perfectly. In it the discovery of a flawless 34-carat diamond leads to an auction in which the losing bidder commits murder to obtain the mysterious item. When the relic is accidentally shattered a sickness spreads across the earth causing ones blood to turn to diamond crystals, the pointed shards of which protrude from the victim’s lifeless body.This, however, is only the beginning for our unaffected main character whose original act of violence set the wheels of catastrophe in motion. His journey will be a metaphysical one punctuated by infinite wisdom and bloody self-sacrifice.

There have been many Clive Barker related comic books, some direct adaptations, others expanding on worlds he’s created. The vibrant, sometimes hallucinatory scenarios in his writing is not be easy to translate to a visual medium and this accounts for why more comic adaptations of his work fail than succeed. Seduth, however, firmly belongs in the successful category. All involved do a great job making a complex horror story a visually cohesive whole, but I have to make mention of the one element that really puts it over the top: 3-D (with glasses included, of course.)

With over 25 years experience in the field, Ray Zone is the undisputed master of 3-D comic books. The multiple levels of depth Zone creates here, combined with complex panel layouts, push the surreal narrative much further than if it did not have the effect applied. There are so many different layers visible that one has to really study the individual pages or else miss very small, vet very important pieces of the story. Clive Barker fans can be a pretty discerning lot when it come to horror, but I find it hard to imagine any of them not being pleased with the one-shot Seduth.

There you have it: four titles, all markedly different from one another and all highly recommended, that will make for an extra spooky (and possibly even ooky) October. Pick them up, put on some Goblin for background tunes and prep yourself for the coolest of all holidays: Halloween!