The undisputed master of the Japanese horror manga genre is Kazuo Umezu. Born in 1936, Umezu is part of the generation of artists and writers who grew up in the wake of the devastating atomic bombings of Hiroshima and Nagasaki followed by the humiliating defeat of Japan in WWII. The generational shell-shock of these events undeniably shaped the future of their work and served as the starting point for what is now the massive Japanese pop culture landscape.

Although he had started producing manga while still in high school, Umezu began his horror work in the early 1960’s with stories that featured such lurid and confounding titles as The Momentthe Mouth Tears to Ears and A Girl Who Has A Human Faced Lump On Her Cheek. However, it was in 1972 that he began the epic work with which he is most associated: The Drifting Classroom. 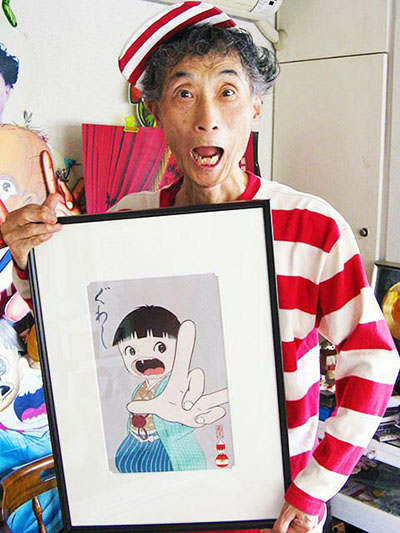 Part horror, part science fiction, Classroom follows sixth grade elementary student Sho whose entire school and the grounds it rests upon is inexplicably transported to a completely barren, seemingly lifeless wasteland of rock and sand. The school is filled with terrified children and teachers succumbing to madness. As matters deteriorate rapidly, the children realize their survival rests solely within their own hands. Sho has to grow up quickly as he assumes the role of leader to the other children, banding together against both the adults and the far worse horrors awaiting them in the twisted dunes beyond the school grounds.

One pervasive theme of Classroom is the resiliency of children. After the deduction is made that the school has not moved at all but instead time traveled to Tokyo’s desolate future, the adult’s mental state breaks down rapidly. Whereas for the adults this altered reality is too far beyond their rational minds to accept, the young children are able to adapt and consequently outlast the “stronger” adults.

Though there is much action and the story constantly charges forward, there is an eerie, impenetrable stillness that hangs over the whole affair only amplifying the horror. One imagines the only soundtrack being the sounds of small feet running down darkened tiled hallways and the echoes of children’s agonized screams. Make no mistake – this is an extremely disturbing read meant only for the bravest of comic readers. I’ve read thousands of comics, a sizeable chunk of them of the horror/sci-fi/fantasy variety, and I’ve never seen anything quite like this. A true masterpiece of horror comics, manga or otherwise, the entirety of The Drifting Classroom is available in a series of eleven volumes published by Viz.

For new readers wanting to give Umezu’s work a look via some of his shorter stories Dark Horse has published three collections all very appropriately titled Scary Book. Less caustic than Classroom in tone yet still plenty eerie, Volume One contains a particularly effective story titled TheMirror in which the narcissism of a teenage girl breathes life into her own demonic reflection determined to take over the girl’s very existence.

The sheer originality and ferocity of Japanese horror (both in print and film) has been much appropriated in the west and it’s really amazing to go back and seek out the roots of the genre in all its undiluted glory. For those interested you will find no better place to start than in the works of Kazuo Umezu. In short, when it comes to horror, the Japanese do not play. Read The Drifting Classroom and you’ll know exactly what I mean.