Artist Dave McKean has found tremendous success and acclaim in a wide variety of mediums including painting, sculpture, book illustration, photography, filmmaking, music, and, of course, comics. Legendary amongst sequential art enthusiasts, his singular and recognizable style is found in many of the most highly acclaimed titles of the last 20 years including Violent Cases, Mr. Punch, Arkham Asylum, and The Sandman, as well as his own creation Cages. 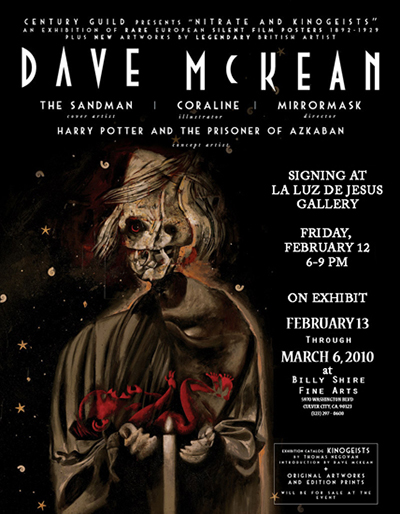 I had the pleasure of attending the opening reception for McKean’s newest series of paintings this past Saturday at the Billy Shire Fine Arts gallery in Los Angeles.

There is little in art as exciting as seeing that absolutely perfect combination of artist and subject matter, when a creator draws inspiration from something that is very dear to them, and produces extremely powerful imagery as a result. Channeling his love for silent film (with a particular emphasis on the incomparable classics of German Expressionist cinema), McKean has created what I believe to be the best work of his long and highly-esteemed career.

Allow me to take a slight detour here, as the McKean exhibition was preceded earlier in the day by another more than noteworthy event: the Barron Storey and Kent Williams book signing at Gallery Nucleus in Alhambra, CA.

Storey was on hand to sign copies of the new re-edited edition of his long out of print and highly-coveted book The Marat/Sade Journals, as well as a new collection titled Life After Black. The stunning and complex work of Storey in these books could never be summarized in a mere sentence or two, so look for a proper appreciation of them in an upcoming installment of Sequential Sunday.

It is always great to meet artists who have achieved the level of respect and acclaim that Storey and Williams have, yet still remain as completely personable and friendly as they are. They were also gracious enough to sign copies of their past work including the Eisner Award winning The Sandman: Book of Dreams (in which the Despair chapter is by Storey) and Destiny: A Chronicle of Deaths Foretold by Williams

These two esteemed creators stand as McKean’s contemporaries and are his good friends as well, and they later joined McKean at Billy Shire to congratulate him on his newest collection of works.

The haunted, shadow laden world of German Expressionist silent films was one punctuated by layers of psychological complexity expressed in a highly visual way, employing camera tricks, effects work, and lighting set-ups that were far ahead of their time. Through their technical brilliance they evoked a picture of a country caught between the past and future, one looking cautiously forward (such as in Lang’s Metropolis), but still recalling its own troubled history (the superstition-filled world of Murnau’s Faust).

The combination of McKean and silent film produces extremely powerful results, clearly seen in every piece at the Early Cinema exhibition. Here is a creator so inspired by his subject that it taps into the deepest reservoir of his talent.

McKean’s highly evolved work often utilizes an earth-toned collage of painting, photography, found objects, and turn of the century letter-press type on a single piece.  The result evokes a well-worn past while remaining original and fresh.

The large scale, 40″ x 40″ pieces were also complemented by several smaller ink on paper pieces that further explored the world of the silent classics.

The Billy Shire Fine Arts gallery accompanied the astounding McKean pieces with numerous vintage (and exceedingly rare) original silent film posters as part of the concurrently running Nitrate and Kinogeists show. These were made using the (common at the time) stone-lithography process which is all but forgotten now except for its use by a handful of artists aware of the beautiful results it provides.

It was no surprise that an exhibition opening of this magnitude would be attended by McKean’s comic book colleagues, but I couldn’t help but be knocked out by some of the names in attendance. Such as Grant Morrison the beautiful young actress Stephanie Leonidas, star of the McKean directed / Neil Gaiman written film MirrorMask.  When I asked if the filming of MirrorMask was difficult for her (she is on-camera almost every moment of the film) she noted that her director actually made the task very easy for her. She went on to explain that McKean was so friendly and patient on the set (as well as highly prepared with the entire film extensively storyboarded) that the whole experience was a lot of fun. This actually did not surprise me as McKean could not have been any friendlier at the show, happily signing books, posing for pictures, and talking at length with everybody who approached him.

As the evening neared its end I had the chance to express to McKean how great I thought the work was, especially his awesome piece inspired by the opening sequence of Faust in which the Devil looms over a village that is soon to be ravaged by the bubonic plague. I inquired as to why the original was not at the show (it was available, as several of the works are, from the gallery as limited edition prints). He smiled and said that it was in his house, the one piece of the group that he was not willing to part with.

It certainly goes without saying that the Early Cinema exhibition is absolutely mandatory viewing for every Dave McKean fan (or cinema buff for that matter). To see work firsthand from a top artist at the peak of his creative powers is astonishing, so be sure to catch this show at the Billy Shire Fine Arts gallery before its close on March 6th.