The mixing up of genres can be a tricky thing. If a creator is not extremely well-versed in what makes the cross-pollinating genres work (as well as what is cliche and makes them fail), things simply will not gel. Thankfully, first-time comics writer Matt Maxwell knows how to fuse these things properly, making his hybrid western / horror graphic novel Strangeways: Murder Moon the very entertaining read that it is. 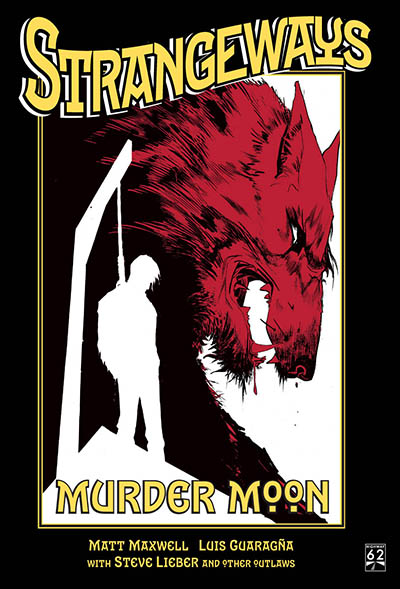 In Murder Moon, (self-published by Maxwell via Highway 62 press), ex-Civil War soldier Seth Collins is the survivor of a late night stagecoach attack by a monstrous wolf-like creature. The beast has been terrifying the nearby mining town of Silver Branch, its Sheriff promising to rid the town of the menace, but offering nothing in terms of results. Seth’s friend Web, (the only other survivor of the stagecoach killing spree) has been bitten by the wolf and may soon undergo a change of his own. As the murders continue Web becomes an easy scapegoat for the vengeful townfolk. Seth must now kill the monster or see his friend (and possibly himself as well) swing from the end of a rope.

The well-worn and overdone conventions of the western are nicely sidestepped by Maxwell, a thing a less thoughtful writer would easily fall into. Our main character Seth is not a seemingly invincible man-with-no-name archetype who never misses his target. Instead, he is a very real (though not exactly ordinary) man who is capable of knowing fear and carries considerable guilt both over his time at war and unfulfilled familial obligations to his estranged sister. This is a character tough enough that we want to be more like him, but also fallible enough that we see ourselves in him. A refreshing change of pace when most contemporary westerns are almost solely populated by sadistic killers and morally ambiguous heroes.

The crisp black and white art by newcomer Luis Guaragna complements the tightly plotted story extremely well. The stark contrast between light and dark, particularly on the character’s heavily lined faces, at times almost borders on Expressionistic. For a story that is set in the great wide open Luis’ densely detailed art contributes a claustrophobic feeling to the story, suggesting that escape outdoors is not an option and safety in numbers in enclosed areas makes for even more of a death trap. Also noteworthy are the awesome single page illustrations by Steve Leiber (who also contributed the art for the book’s cover) that serve as front-pieces for each chapter.

The central Murder Moon tale is followed by Lone, a short story illustrated by Gervasio and Jok. Their style actually proves itself to be a sort of opposite to Guaragna’s as the emphasis is less on mood and more about providing a feel for the vast frontier whose beauty is appreciated by both the wolves who live there and the American Indians whose mythology infuses the story itself.

Lone operates as a origin story for the werewolf of Murder Moon and it is a great way to end a book that up to this point is already a highly enjoyable read through and through. I will not give away any particulars here, but I consider myself well-versed in all things horror and even my ideas as to how the monster came to be were completely turned on their head in Lone.

Gervasio and Jok have also supplied the complete art for the second Strageways installment entitled The Thirsty. This time out Seth finds that continuing west offers no safety from supernatural threats as he enters Drytown, a place in which the local folk have been converted into a coven of vampires. You can find it serialized online here with a collected edition being released later in 2010.

Take my word for it tinhorn, Maxwell’s genre mash-ups are hot as a whorehouse on nickel night. Pony up some dinero and get Strangeways: Murder Moon, the comic that’s as fine as cream gravy. YeeHaa!