Sequential Sunday: We Will Bury You #1

It’s safe to say that lately I have had zombies on the brain. From reading over 1,500 pages of The Walking Dead in a week to the recent spectacular art show Zombies In Love there has been no shortage of the shambling dead in my thoughts. Given this it was without hesitation that I picked up the recently released first issue of the new IDW series We Will Bury You written by brother and sister writing duo Brea & Zane Austin Grant with art supplied by Kyle Strahm.

The year is 1927 and word is spreading quickly of a growing number of “riots” in Manhattan. Still, life continues as usual for Mirah, a beautiful young woman who dances with lonely men for nickels at a local gentleman’s club. She is married to Henry, a misogynistic pseudo-elitist who also sees himself as a “higher class” than the immigrants that pass through Ellis Island on a daily basis. 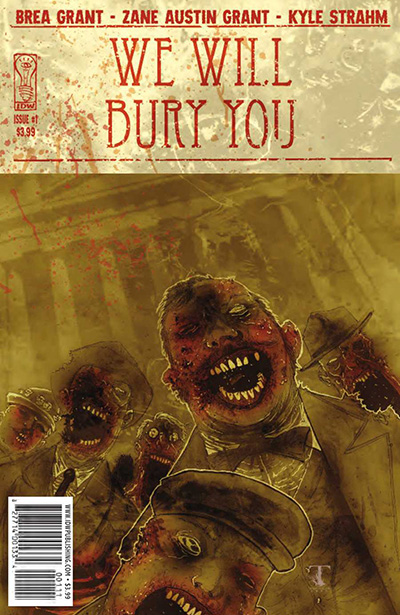 Life for the independent and strong willed Mirah is made more bearable through her affair with a Ukrainian thief named Fanya, an affair the jealous Henry is well aware of. As the rioter’s burst into Mirah’s place of work, we see them for what they really are: violent (and hungry) members of the undead. As the carnage builds Mirah and Fanya are separated in the melee.

Fanya is led away by Henry who has dark plans for the woman who has given the “disease” of lesbianism to his wife. Too bad for Henry that he’s going to find out just how strong and fearless a woman can be. Currently slated as an unlimited series, it is difficult to know if the high level of story, dialogue and art very evident in this first issue can be upheld over what may be several years worth of story arcs. Zombies have become so prevalent in popular culture in recent years that it is increasingly difficult for creators to offer up anything fresh to this rotting horror sub-genre.

Still, there is much here to suggest that this book is in it for the long haul and we the readers should be there with it. The first thing that really took me was the very sharply written dialogue, particularly in the opening pages in which the fed-up and dismissive Mirah has to listen to Henry’s offensive, self-satisfied ramblings on women and morality.

We Will Bury You is written by comics newcomers Brea Grant and Zane Austin Grant, and rarely do you see such a level of involving dialogue, tight pacing and fully realized ideas from those still so fresh out of the gate. Social commentary is practically mandatory for post-Romero zombie tales that want to be more than straight-up gore fests and setting this story in the atypical  American melting pot of 1920’s New York is fertile ground for writers with such aspirations. I’ve also been wondering how the brother and sister duo will work in The Great Depression which is less than two years off from the start of this tale. Perhaps the zombie outbreak will hasten its arrival?

As all of us comic book types are also fans of multiple areas of genre related media I’d like to interject a tidbit that is highly notable, although not directly related to this book. You might recognize Brea Grant as the actress who played Daphne in over a dozen episodes of Heroes and also appeared in Rob Zombie’s Halloween II. Given that this is a period piece, the feel of the era is essential to the success of the story and Kyle Strahm’s art is well up to the task. His art depicts the well-worn environments in a highly stylized but very believable fashion, particularly Mirah’s squalid apartment and the pedestrian heavy streets.

Strahm’s style is a bit reminiscent of Ted McKeever and the non-painted work of Simon Bisley yet still wholly original in and of itself. It is interesting how our two female leads are drawn in a very attractive and unblemished fashion, but the male characters exhibit features that are highly exaggerated and border on the scraggily grotesque even before any zombie transformation takes place.

An extra treat for the series will be the revolving stable of great names supplying the covers for We Will Bury You. Issue 2 (to be released later this month) will feature the following spectacular cover by Eisner Award winner Nate Powell.

We Will Bury You is another notch in IDW’s ever-expanding belt of impressive titles. It is impossible to say how the series will progress from here, but if the first issue is any indication of what’s to come, then I am in it for the long haul and you should be too. Just imagine, flappers battling zombies? HELL, YES!