Cosplay Girl of the Month: April 2010

One of the features we do here at Comic Impact is the Cosplay Girl of the Month (NO anime, manga, or role-playing games… just comics). That’s right, beautiful ladies dressing up as your favorite super-hero characters. This month we’re privileged to be showing you Elise Archer – aka Princess Bee, or Clowny Princess. 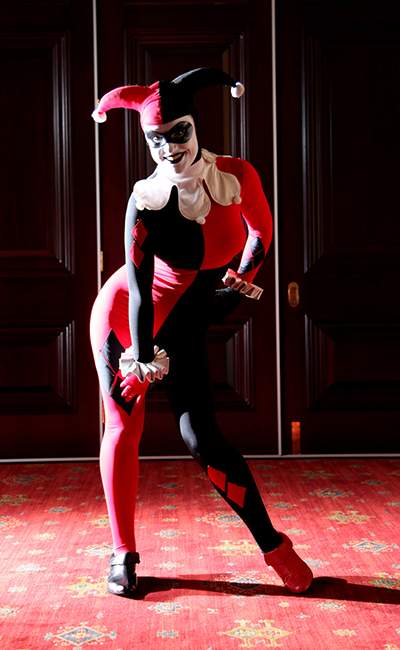 1-What is your name?
Elise Archer – aka Princess Bee or Clowny Princess

2-How old are you?
I’ve officially reached that age where I’ve become, simply ‘indefinite’. People find it hard to pick – without makeup, I still get carded.

3-Do you read comics and if so, what are your favorite titles?
I do indeed. Mainly I stick to Batman titles – specifically, at the moment, Gotham City Sirens. I’m also reading Secret Six. I kinda started Batwoman but petered off early on, which I’m regretting now. Generally I’ll pick up DC issues here and there and I’m hellbent on eventually collecting every issue the Joker has ever been in – don’t laugh, I’m actually more than half-way through! Anyone wanna sponsor my mission to get Batman #1? 😉

4-What is your favorite comic book character?
Harley Quinn and the Joker!

5-Who are your favorite artists or writers?
Are we talking current or can we include past as well? Because my comic reading is pretty limited, some of my faves have moved on from DC titles to do other stuff. Currently, I love the work of Paul Dini, Gail Simone, Nicola Scott, Dustin Nguyen, Adam Hughes and Greg Rucka (so long as he doesn’t touch the Joker), but past faves include Chuck Dixon, Joe Kelly, Ty Templeton, Graham Nolan, Steve Engelhart, Alex Ross, Jim Aparo, Kelley Puckett, Tim Sale, Marshall Rogers, Bruce Timm, Brian Bolland, Kano, J.M. DeMatteis…

6-What got you into cosplay?
Just basically the desire to dress up as my absolutely favourite character ever – Harley Quinn – and to do her as absolutely perfectly as I could.

I was “off” the geek scene for several years there, and when I returned I found that Australia had suddenly grown a bit of a geek culture, complete with conventions and dedicated cosplayers. That was a huge encouragement – our scene here is tiny compared to America’s but it seems to be growing in leaps and bounds, which is awesome. Attending cons as Harley and getting such amazing and positive feedback was a huge spur-on to continue cosplaying and doing the best I can.

Because I’m such an obsessive Harley Quinn fan, I found I wasn’t satisfied just by doing her traditional outfit – I very quickly began doing other costumes and outfits that she’s worn and initiated something a little different in the HQ fandom by doing “story shoots” – doing a set of photos at a location to tell a specific story. I found fans responded to these extremely well and so I’ve continued doing them and that kinda keeps me going, cos I just want to keep perfecting this image of her Royal Quinncess and diversifying it yet keeping it as authentic as possible.

It’s totally fantasy fulfillment for me – but also for the audience as well.

All that said, like most cosplayers, I think, I’ve always loved dressing up and never really grew out of that passion.  You say costume party, and I’m there – with bells on! 😉 Of course, I was always the person who went completely overboard in perfecting the costume…

7-If you do more then one character which one is your favorite, and if you do only one do you have some ideas for more costumes?
I only do one character! But I put everything into making that character as fabulously as I can. To that end, I’ve already done several of Harley’s other costumes and will be doing more.

8-How long does it take for you to make a costume?
I get some costumes custom-made as I lack the sewing skills to make them myself! Others I piece together from bits and bobs. How long it takes depends on how much detail there is and how much back and forth I have to do with the seamstresses I work with, what my finances are like (I’ve spent a huge amount of money on my traditional HQ costume) and how long it takes me to pay them off, however long it takes me to scout through various shops, markets and eBay to find bits and pieces and so on. So it can take a couple of months overall to get a costume finally assembled. 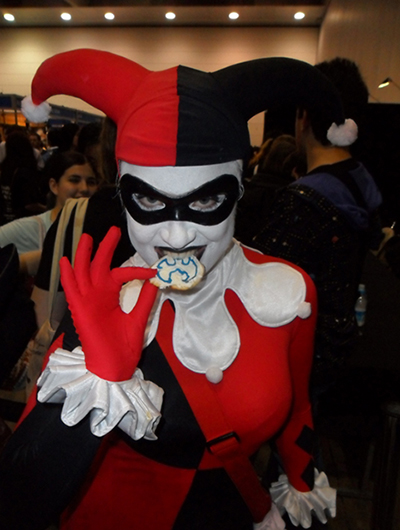 9-Have you met any of the artists or writers where your costume is based on their work?
I haven’t, I’m sad to say! Being Australian-based we don’t get a diverse representation of the DC folk here, we’re kinda limited but whose available and what the cons can afford to bring out. Since I’m going over to SDCC this year, this may well very change but at the same time I am also a little wary of approaching pros – I don’t like to think I’m encroaching on their space or being invasive. It was for this reason I didn’t say hi to Greg Rucka last year when he was over for a con! I regret that now, so we’ll see how it goes.

10-Do you buy any toys, busts and etc. based on some of your favorite costumes?
One of my obsessions is the objective of accumulating every statue, toy, bust and otherwise collectible object of Harley Quinn in existence… so yeah. I own a fair bunch! 😉

11-So do people know you dress up like a comic book hero on your free time?
Oh, totally. I don’t think I could hide it forever, I’m not the kind of person who can keep significant aspects of my identity a secret. I have some friends from before I cosplayed who actually started cosplaying with me, which is all kinds of awesome and I have friends I met in the cosplay world who are fellow cosplayers, and I have friends who don’t cosplay at all but who either think my hobby is awesome, charmingly eccentric, or just accept it as a particular quirk a friend of theirs has.

12-What is the funniest thing that has happened to you at a convention?
It’s hard to pin down – I haven’t actually attended THAT many cons as yet and cons tend to be incident after incident of random, funny, awesome, bizarre little events that contribute to the experience as a whole but can be difficult to single out.

Up until recently, I had an insane coke zero addiction and the impromptu photoshoot a friend cosplaying Zatanna and I did – in which Zatanna magically conjurs more coke zero for Harley – was pretty funny.

There was also the moment where me and some friends were posing for a photo and someone behind us calls out ‘turn around, turn around!’ and I’m thinking, ‘how rude, we’re posing for a photo, YOU come around HERE!’ and so this person does and kneels down and snaps off a quick shot and then dashes off into the crowd and I’m like ‘that’s right, Mr Rudey!’ and my friends are staring at each other going ‘ZOMG… SETH GREEN JUST TOOK OUR PHOTO!’ Yes, Seth Green took our photo and I had no idea.

13-Do kids come up to you and think you are the real life character?
I don’t know if kids believe it so much as let themselves believe… certainly the reaction from young Harley Quinn fans is an awesome thing to see and be a part of… to give them that moment. I remember one little girl who had her photo taken with me at one con, came up to my later to tell me she’d found a “comic of you”, and that really made my heart melt…

14-What do you like to do when you’re not costuming, such as other hobbies?
I love dancing, it’s a big passion of mine – I trained ballet and bellydance and poledancing for quite a long time. At the moment I’m dividing my attention between ballet and trapeze/aerial training so other danceforms have had to take a backseat. So yeah, I love getting up on the trapeze or the lira and tissu and challenge my body. I train in singing and vocal work, mainly for my other career as a Marilyn Monroe impersonator, which is also a big love of mine. I’m an aspiring circus clown so I train clowny stuff like mime and slapstick and acrobalance with soon juggling and fire handling and other exciting stuff to be incorporated. I write a lot of fanfiction and manage some websites dedicated to Harley and the Joker. I participate in local community groups and in the kink scene here where I live, love to go out dancing or out to live shows. As cliche as it sounds, I’m a severe shopaholic – I love shoes and dresses and lingerie and gloves and hats and pretty, pretty things. I’m also a burlesque performer, so I love to put things together in that arena.

I always love to hear from fellow geeks and Harley Quinn fans so please get in touch! 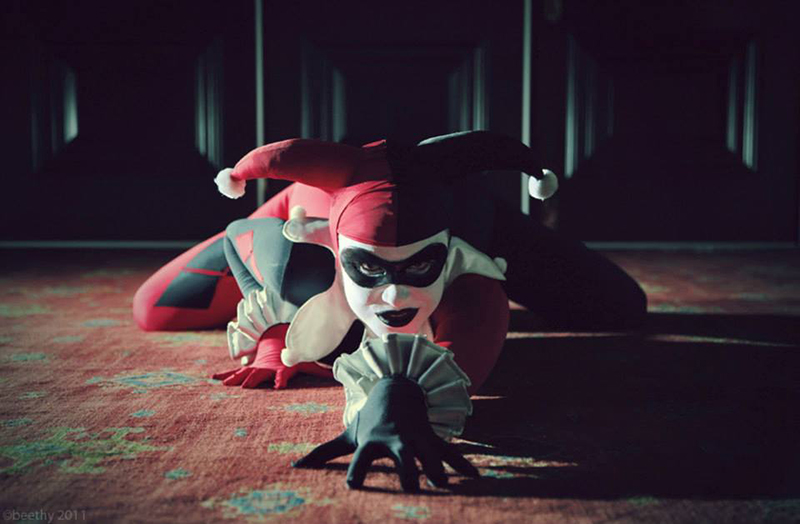