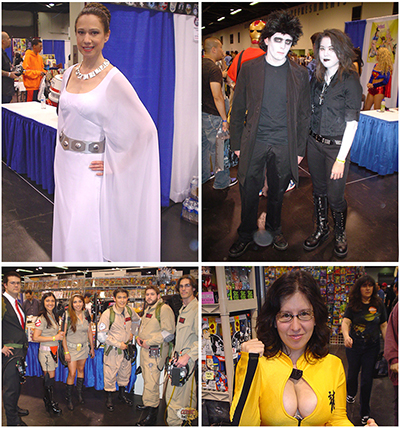 Last weekend gave us the inaugural edition of the Wizard World Anaheim Comic Con and although I had fun I have mixed feelings about the event to say the least. I do have a bit of a rant concerning the event (and others like it) to get up on the soapbox about, but I’d like to save that for the end of this report and spend some time first spotlighting some of the cool comics creators, dedicated cosplayers, and eminently fun pop culture ephemera to be found at the event.

Some of the biggest attention getters on a con floor are, naturally, going to be the cosplayers with their homemade (yet often very professional looking) costumes. One of my favorites was this Princess Leia with a very screen-accurate gown from A New Hope.

It occurred to me when I saw the following duo that, given the popularity of Neil Gaiman’s Sandman, it’s surprising that you don’t see that many members of the Endless family at conventions. Regardless, these two kept the Morpheus flame alive and looked great doing it. With all of her vengeance taken care of, The Bride from Kill Bill loosens up and busts out at the con.

Apparently, the nutty Oblong never goes out in public without his signature clown make-up. He was there selling (amongst other things) his hilariously offensive Random Drawing books. If you’ve ever wondered what a dwarf putting jelly beans up Dr. Phil’s butt looks like, here’s your chance.

After being a fan of the great Simon Bisley for many years it was great to get the chance to meet him for the first time. Here he sketches Lobo for a fan.

Bisley was there to help promote the titles of independent company Berserker, along with Glenn Fabry and writer/publisher Andy Brown. I had a great conversation with Brown about the problems that face today’s independent publishers, even when top-notch talent is involved like Bisley, Fabry, and Alan Grant. Look for more on this topic along with a review of the Berserker title Church of Hell in next week’s installment of Sequential Sunday.

Wrightson echoed the sentiment that I heard shared by every comic creator at the convention about the minimal amount of actual comics available at the con (more on that at the end of this column). He was still having a good time time though, in part because his table was across from these fine folks.

They are members of the R2-D2 builders club Astromech. Their functioning R2 units were a source of non-stop fascination and enjoyment for kids and adults alike. Some of the most interesting original art work on display at the con were at the table of the Star Wars club the 501st Legion, where three incredible, modified Stormtrooper helmets were on display. The first is an awesome steampunk helmet by Kevin Graham complete with a usb port and built-in speakers.

Tommy Keiser (a contributor to the tv shows Robot Chicken and Titan Maximum) gives his uniquely Eastern flavored version of the familiar headgear. My favorite  is this spectacular Creature from the Black Lagoon helmet by Matt Busch, an artist who is no stranger to fans of the Star Wars universe. 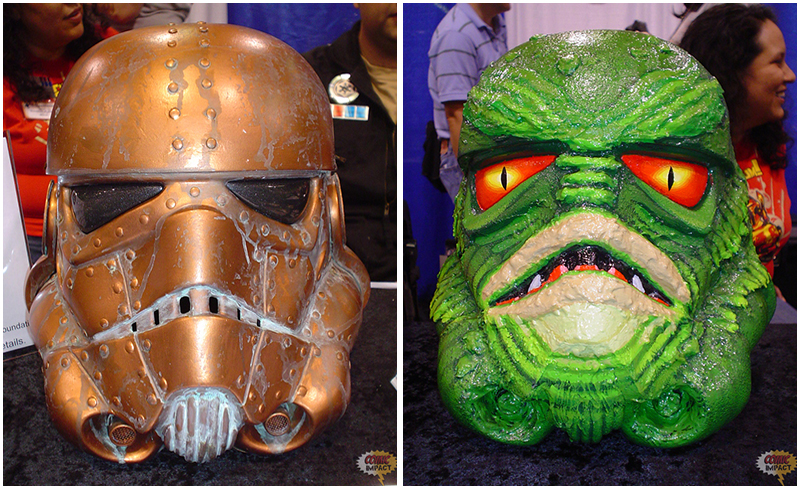 The helmets (and many more) will be auctioned off soon to benefit the Make A Wish foundation. Dubbed the TK Project you can find out more about how to place your bid for an amazing, one-of-a-kind piece of Star Wars art here.

While were on the subject of original art, here’s my first-prize winner in the “Really, Really Want This But Can No Way Afford It” category, an original Snoopy drawing by Charles Schulz, circa 1970’s. Price: $1,800.00. 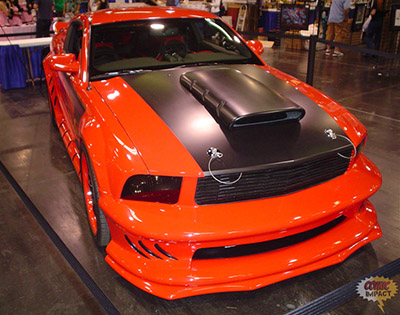 One of the most kick-ass things I saw at the convention was, appropriately, the Red Mist’s car from the movie Kick-Ass.A highly modified 2008 Mustang GT, this one-of-a-kind car features a 550-horsepower 4.6 liter V-8 engine, 20-inch custom wheels, scissor doors, and two-tone leather seats. Seriously, if you drive something this cool you’re pretty much obliged to dress like a superhero and royally kick somebody’s ass.

All of the above was great fun to take in, but I have to interject the beef I have with conventions lately, particularly since this Wizard World convention was the biggest offender yet: where the hell at this Comic Con are all the comic books?

The various worlds of popular culture have been overlapping one another constantly at an ever increasing pace in the last decade or so, and this can be directly seen at conventions. This in and of itself is not such a big deal.

The problem for comic fans (for whom these events exist in the first place) is that the floor and table space usually reserved and easily filled by the world of comics and their creators is being squeezed out by disposable Hollywood product. Add to this the worship of all celebrities great and small and you have conventions that are less about comics and more about everything else.

I realize that worlds of fandom crisscross each other constantly, and celebrities that have made significant contributions to the worlds of sci-fi, fantasy, and horror (like, say, William Shatner or Bruce Campbell) are welcome convention mainstays.

However, a show like this particular Wizard World, which prominately billed itself as a Comic Con, had WAY more floor space devoted to “celebrities” than those who produce work for the art form we all love so much. Seriously, comic art legend Russ Heath had a table a couple of rows from participants of the reality shows The Amazing Race and Survivor. WTF!?!

This problem is getting way out of hand. There really is no way to reverse the situation as the damage is already done. One solution is to start a new convention, one only for comic creators, their fans, and devotees of the medium. As you may already know wheels are in motion for just such a thing, to be potentially called Creator Con. Comic Impact’s own Richard Bashara wrote a great piece on this topic recently and I urge everyone to read it, if you have not done so already.

I’m going to get off the ol’ soapbox now and close by saying that although elements of the Wizard World Anaheim Comic Con were a bit frustrating, overall I had a fun time. It was great to hang with fellow Comic Impacters Simon and Christina, as well as meet new Impact compatriot Robert. All that’s left now is figuring how the hell I can get my hands on the Charles Schulz piece…