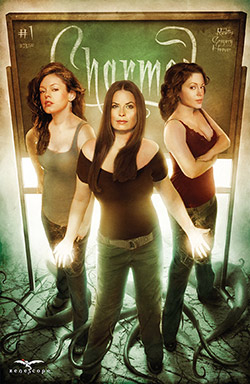 When I heard Zenescope was putting a Charmed comic out I was wondering how it would work. I was always a big fan of the show and I was afraid it would be hard to pick up the essence of the show so long after it had been on the air.  After reading the first issue I have hope for the series.

I really like the cover by David Seidman.  I think the pose was very true to the tv series and the muted colors gave it that magical feel. It also has aspects from the book with the vines and chalkboard. Plus you get the familiar “Charmed” behind them. I just think it is really pretty and well done. That image was the first I saw when I read there would be a Charmed book and that was enough to make me want to pick it up. Talk about a great image to have for people to judge your book by it’s cover.

The interior art by Dave Hoover isn’t my favorite. I find it very inconsistent. Paige and Phoebe have very feminine faces and hair, which I think look pretty good but Piper has a very masculine face with a strong jaw and forehead and the hair seems more like one block. The attention to the detail in the background was actually really well done.  The fact that there are flowers on the couch and actual blades of grass shows great thought and talent. Now, if only that much attention was put into making the people in the background. To me, those people all kind of looked like the same mannequin in different positions. I think if you put a lot into the buildings and trees you should put that much into the people. My one other issue was the placement of panels. Sometimes the pictures overlap and it works, it gives the page a fun and interesting look I think they were going for and other times it looks like there a foot floating by somebody’s head. I uses the example on the first page, the girl is stepping back and it looks like she is about to fall out of the panel.

The story by Raven Gregory and Paul Ruditis, on the other hand, was a good solid opening.  When the TV show ended it gave a brief overview of where the sisters lives ended up. You see the happily ever after moment of being a grandmother but this picks up eighteen months after their final battle. It looks like we will get to see what happens along the way to old age. We also get to see familiar “beings” such as, an Angel of Destiny, Pipers husband Leo, their sons Wyatt and Chris and Phoebe’s husband Coup. The new faces are Piper’s daughter Melinda, Phoebe’s daughter Prue, and the two demons set to cause trouble for the Halliwell sisters. Speaking of the demons, it is unclear what they are trying to resurrect but they do make their way to a hell like place with flames and bodies chained to a wall in various stages of death.  I’m thinking at some point we will see the Underworld and what the demons have been doing during their hiatus from attacking the Charmed Ones.  There are some faces we didn’t see that kind of surprised me, Paige’s husband Henry and their twins.

Overall, I think Charmed fans will enjoy this issue. Those who are not familiar with the Charmed Universe won’t be confused but won’t know all details you got from the show that are helpful while reading this. So, you may want to pick up the zero issue along with #1. It’s set up like their “Book of Shadows” and introduces you too all the players and a gives a little family and demon history. You can always go back and watch all nine seasons

of the show too but picking up two issues might be a little easier.