One of the features we do here at Comic Impact is the Cosplay Girl of the Month (NO anime, manga, or role-playing games… just comics). That’s right, beautiful ladies dressing up as your favorite super-hero characters. This month we’re privileged to be showing you Tallest Silver 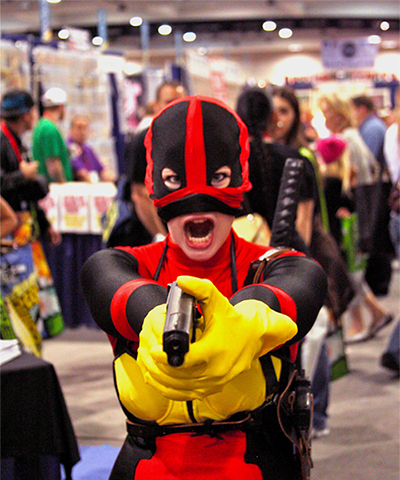 1-What is your name?
Tallest Silver, but just call me Silver.

3-Do you read comics and if so, what are your favorite titles?
Absolutely! The current titles I pick up right now are Gotham City Sirens, Deadpool, Merc With a Mouth, Batman: The Widening Gyre, and some more. But I think my favorites of all time have been Suicide Kings, Johnny the Homicidal Maniac, and some manga like Fruits Basket and Chobits. Those last two were just too cute, I couldn’t help myself.

4-What is your favorite comic book character?
I could no easier pick a favorite star in the sky. Hmm…  I love Deadpool, but I fear his sudden overexposure shall be the death of him as a character. I love Spider-man (especially in his symbiote suit! Damn you Spider-man 3…), but I think my favorite all time comic book character is Batman. He is the Goddamn Batman, after all.

5-Who are your favorite artists or writers?
I always had a thing for Jhonen Vasquez, Roman Dirge, and Bruce Timm. I LOVE Paco Medina’s art; he’s the main reason I keep going back to pick up Deadpool’s current main title. Writers? Joe Kelly, Gail Simone, Victor Gischler, Paul Dini, Kevin Smith, I could go on and on.

6-What got you into cosplay?
I have absolutely no shame in acting like a crazy person in public. It’s problematic. So when most kids just grew out of dressing up in their Halloween costumes everyday, I never did.

The first time I remember intentionally dressing up for an event was when I was 7 and going to see “Pocahontas” in theatres. I just HAD to wear my little Native American dress I had. Braided my hair and everything. I felt pretty proud.

When I got to high school, I felt like a zombie most of the time (what teenager doesn’t?) so I would reflect that and look like a zombie sitting in class. I’m pretty sure they tell stories about that weird zombie chick, it’s pretty amusing, hahaha. My first REAL cosplay was therefore, of course, Sally from the Nightmare Before Christmas. I just love her to death!

7-If you do more then one character which one is your favorite, and if you do only one do you have some ideas for more costumes?
A favorite? Oh dear… Being Sally has and always will be very close to my heart. My makeup won first place in horror makeup design at a Theatre Competition I did back in high school so I’m very proud of it. But I think being the Lady Deadpool is my favorite. I literally just talk nonstop and say whatever I want to whomever I want. I even have little yellow post-it notes for his (now her!) yellow boxes. I dressed as Lady D before Marvel created her, so my friends blame me for her existence. I know that not to be true, but it’s still amusing. But then I LOVE being Poison Ivy as well. I like to flirt with any Harleys, Batmen, or even Harvey Dents/Two Faces I see. Okay, I flirt with anyone in the DC universe when I’m Ivy. Except the Joker. He gets my scorn.

8-How long does it take for you to make a costume?
It depends on when I actually get my act together and focus on working on a costume. I’m not the best sewer in the world, but I am FANTASTIC at cutting things up! I usually take a dress, leotard, something I find at Goodwill or any dance studio (or online) and alter it to fit my needs. Oh how I wish I could sew a spandex suit from scratch! But all in all, I say about a couple of months. 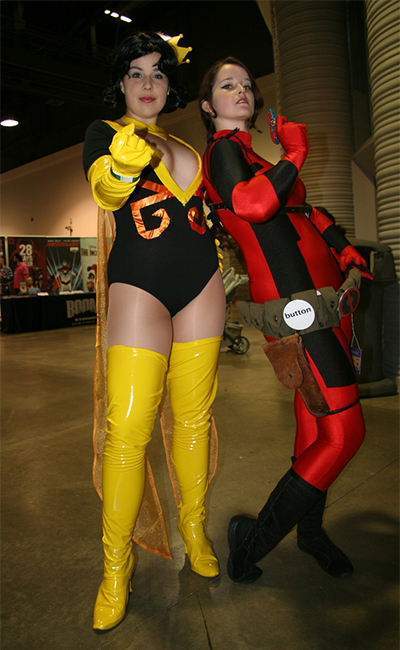 9-Have you met any of the artists or writers where your costume is based on their work?
YES! I once met the co-director of the Corpse Bride, Mike Johnson, at Comic Con ’06. I was exceedingly happy. This past year at Comic Con 09, I met Joe Kelly and Gail Simone when I was Lady Deadpool, and then Rob Liefeld at the Long Beach Comic Con. They were very, very amused with me and my… rambunctiousness. I met Bruce Timm when I was Poison Ivy styled after his design too, but I think my Harley Quinn (hi Kit!) and I freaked him out. We’re pretty intimidating at times.

10-Do you buy any toys, busts and etc. based on some of your favorite costumes?
Yup! I have Mattel’s version of Poison Ivy, a bust of Sally and of the Corpse Bride, and a few action figures here and there. One of my friends actually bought me a custom Lady Deadpool action figure that looks just like me!

11-So do people know you dress up like a comic book hero on your free time?
Let’s just say, people who know me are surprised when I have normal clothes on.

12-What is the funniest thing that has happened to you at a convention?
Anthony Michael Hall once asked out my Harley Quinn and I (being Poison Ivy) during the Long Beach Comic Con. We agreed because how often does a teen star of the 80’s ask us out? It turned out to be more of a party than a date, but we were laughing about it for a long while.

Another time at Comic Con ’09, I was asked if I was Ryan Reynolds under my mask when I was Deadpool. I laughed at the question, and I assured the guy that I wasn’t. Then I lowered my voice, and whispered very quietly, “No, I’m Scarlet Johanson. Ryan’s just my husband.” He started flipping out with excitement until I removed my mask and proved that I wasn’t. It was very funny.

13-Do kids come up to you and think you are the real life character?
Yes and no. It depends on what stage they are in development and growth. I’m also a professional children’s entertainer; I go to children’s birthday parties as their favorite Princess, so I literally do this for a living. When it’s for my job, yes they believe. When I’m at a convention, it varies since you could see five Poison Ivys walking around or something. But most of the time, they do. And that’s awesome.

And that’s it! Special thanks to all my friends, and especially Kit, Roxanna Meta, Eurobeat King, Clyde Max, Psykitten, Mia Ballistic and everyone! Even you reading this. You! YES, YOU! You know who you are. All these people think I’m talking to them, but I’m just talking to you. You are special to me. Thank you. <3 I hope to meet/see you at a convention! 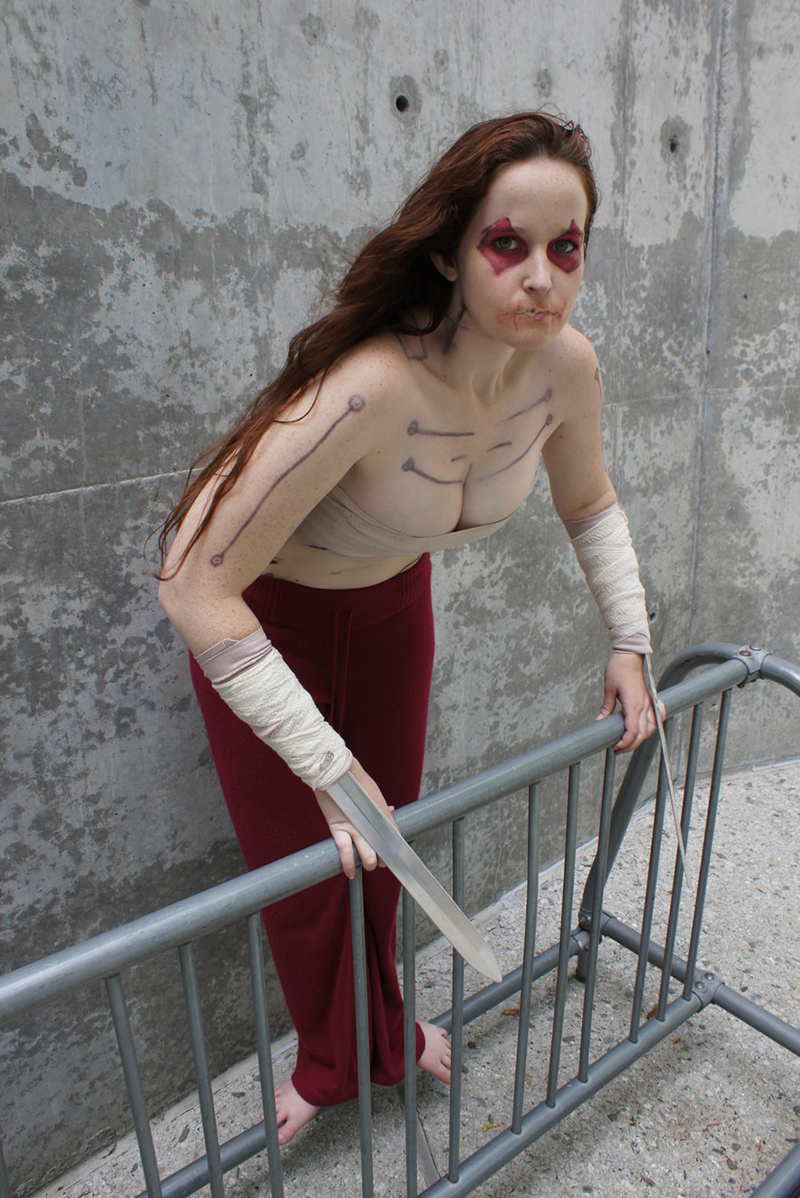