As someone who feels that being “weird” is one of the best attributes a comic book can have I am naturally going to gravitate to a book which purports to list the world’s most wigged out sequential shenanigans. The potential problem with such a book is, with countless thousands of great and not-so-great bizarre comics to choose from, would the choices for inclusion all be worthy of mention? And, maybe more importantly, what should have made it into the book and was instead left out? Lucky for the reader, most of what I found in Holy Sh*t! The World’s Weirdest Comics by Peter Stanbury and Paul Gravett is more than worthy of making the cut (and the book can be found at a great price here.)

Thankfully the presentation of the material isn’t by list, publishing era, or genre. Instead the order of the titles discussed is seemingly random, which seems fitting given the random oddities many of these comics contain. Additionally it makes the book a much more fun read as every page presents something completely and wholly unlike that which preceded it. 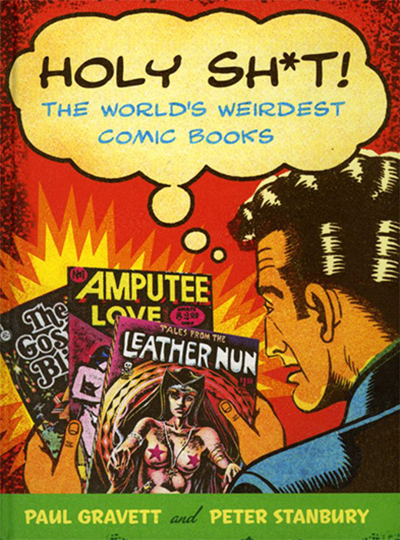 In “Hansi, The Girl Who Loved The Swastika” (1976, Spire Christian Comics) a young German girl who loves the Third Reich changes her way of thinking following the War’s end.

“Where There’s Smoke…There’s Danger” (1963, The American Cancer Society) warned children of the health risks of smoking. I actually had this comic as a kid. The message didn’t take.

“La Donna Ragna” (#1, 1994, Edizoni Sirio). This Italian adult comic has one twisted take on the familiar “Spider-Man” origin story. Trust me, you don’t want to know.

Each of the 60 comics featured get 2 pages of coverage, the left page being text with an isolated panel and the right being a telling cover. The covers are printed on the page full-bleed which crops some of the image out, but doesn’t prove too ouch of a distraction. The book is always interesting to look at, but the writing runs a bit on the dry side considering the subject matter. The magazine Comic Book Heaven covers similar bizarre comic material, but is also laugh out loud funny. For more on that see here.

“PS The Preventive Maintenance Monthly” (#230, 1972, The Department of the Army) teaches troops how to maintain their equipment. With the help of blond bombshell character Connie Rodd, servicing your gun has never been sexier.

The authors must have decided that the comics showcased would lean to the somewhat obscure side (although any fan of classic underground comics certainly knows Tales of the Leather Nun and Binky Brown Meets the Holy Virgin Mary), but still I don’t agree with the authors leaving out some titles due to their familiarity.

Consider the following the books  (which are not in the book) from 1960’s and early 70’s DC titles. These series easily warrant mention in any serious (or not so serious) look at whacked out comics.

Yes, there was a Godzilla vs. Barkley, a comic inspired by a Nike television commercial. Perhaps this would belong more in companion volume called God Damn It! The World’s Lamest Comics.

Despite some minor quibbles I still very much recommend this volume to either those looking to find out more about some of the stranger corners of comics history, or to those just looking for some mind-melting visual stimuli.