Cosplay Girl of the Month: December 2010

One of the features we do here at Comic Impact is the cosplay girl (NO anime, manga, role-playing games just comics) of the month, that’s  right hot girls dressing up like your favorite super- hero characters. This month we’re privileged to have  Rebecca W  for this months Cosplay Girl of the Month! 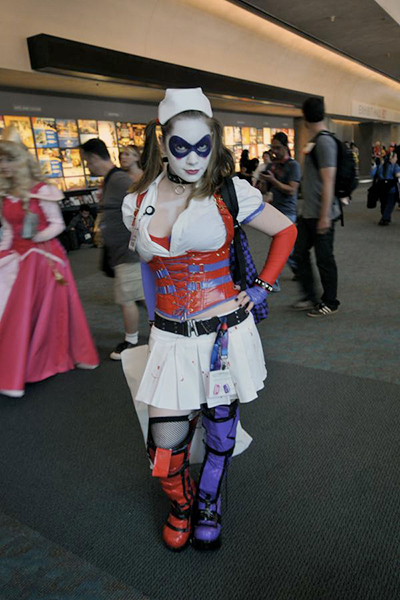 1-What is your name?
Rebecca W

3-Do you read comics and if so, what are your favorite titles?
Yes I do read comics though I’m pretty new to them, I’ve been mainly picking up graphic novels instead of series. One of my favorites so far has to be Batman: The Dark Knight Returns, I definitely enjoy how gritty the whole story was along with the art. I’m looking forward to picking up Gotham City Sirens, as you can see I’m on a DC kick!

4-What is your favorite comic book character?
The short answer: The Joker. The long answer I condensed down into a short one: Batman because he is raw awesome.

5-Who are your favorite artists or writers?
Paul Dini and Grant Morrison seem to always catch my eye when I pick up a title but really I have yet to find something I dislike.

6-What got you into cosplay?
My birthday is around Halloween and my family always threw a costume party for it, so I’ve been dressing up for as long as I can remember. Every year I end up having at least two costumes for Halloween and really me cosplaying just evolved from there.

7-If you do more then one character which one is your favorite, and if you do only one do you have some ideas for more costumes?
Well I’m really only doing two characters right now but it’s difficult to choose a favorite! Harley Quinn is just downright fun, I have no problem bouncing up to other cosplayers for a picture and Female Joker seems to really creep people out which I can’t deny I enjoy! Right now I’m planning on doing a full Classic Harley Quinn cosplay and I might have a Batgirl in the works very soon.

8-How long does it take for you to make a costume?
I’ve made very few of my costume pieces, the one’s I have made all depend on how much time I have to procrastinate hah! For example my Female Joker stockings took well over a month to complete while my Arkham Harley boots I modified only took about a day and half. A lot of times when I do sit down and focus I can complete something very quickly but I’m rarely focused on one thing at a time 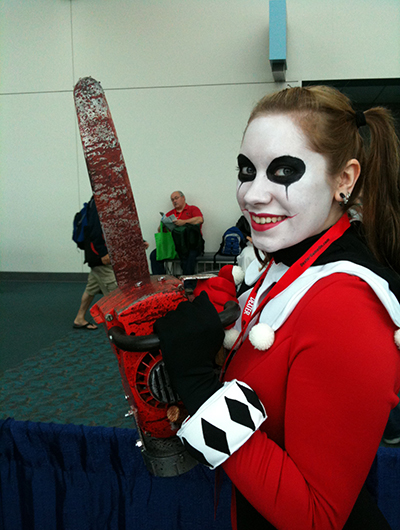 9-Have you met any of the artists or writers where your costume is based on their work?
I did! I got to “meet” Paul Dini at a Harley Quinn meet-up in San Diego, I say “meet” because I was too shy to approach him for a picture but I smiled like an idiot at him and am in some group photos with him and the other Harleys.

10-Do you buy any toys, busts and etc. based on some of your favorite costumes?
Oh I buy far too much figurines, prints and what-have-you of my favorite characters! Sometimes they prove to be useful reference but I’m having quite the ordeal trying to find places for all of it!

11-So do people know you dress up like a comic book hero on your free time?
Hah yeah I think everyone who knows me has seen a picture of me in a costume! When I’m working on something I’m constantly posting pictures of costume pieces or make-up tests.

12-What is the funniest thing that has happened to you at a convention?
Well I just went to my second convention ever recently so everything seems pretty new and amusing. I’d probably have to say the reactions I get as Female Joker are the funniest especially when people approach me from the back. The costume involves a short purple skirt and patchwork stockings but the make-up is as close to Heath Ledger’s Joker as I can get it, I’ve made a few people jump when I turn around hah!

13-Do kids come up to you and think you are the real life character?
I was meeting up with a friend and her family at a convention recently and her little Batgirl came running yelling “Harley! Harley!” which was adorable! I do get hugs from children more than I thought I would as Arkham Harley but I’m pretty certain most of them don’t know the character. I am surprised by the amount of parents wanting a picture of a blood-splattered clown girl with their children though! 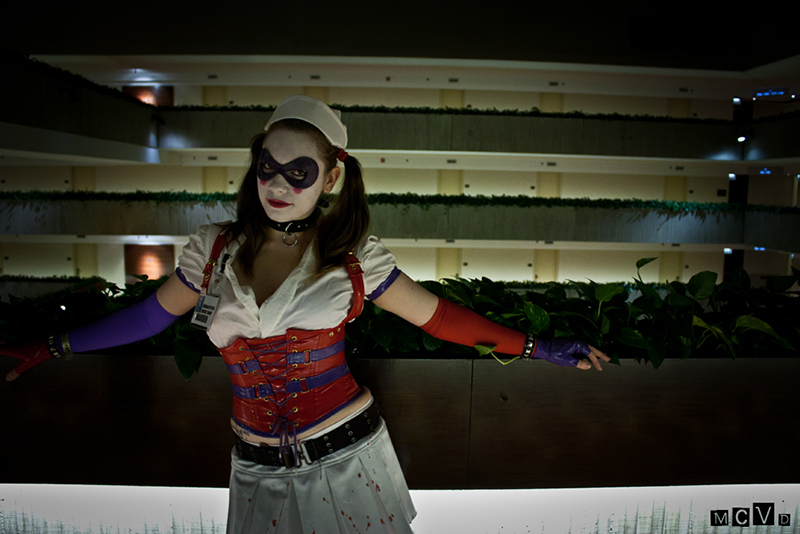