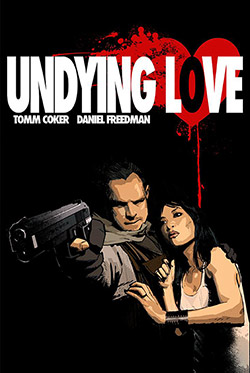 It is not often that we here at Comic Impact get advanced copies of comics but Daniel Freedman and Tom Coker have been nice enough to supply us with anadvanced copy of their new Image comic Undying Love which comes out this week!  The book itself looks to grow the vampire mythos into a bold new direction. I am sure you are saying to yourself, “Self, why do I want to read another book about sparkly vampires who are mopey?” Read on to find out why this book is none of those things and find out why this could be your next favorite action/horror book.

This first issue of Freedman and Coker’s book, Undying Love, starts the same as many: Man falls in love with woman. Not complicated right? But in Undying Love, the complications seem to be unlimited. Our story starts in Hong Kong with an ex soldier named John who is trying to cure his love, Mei of the vampire blood pulsing through her veins.

The first thing you notice about this book is the beautiful art by Coker (Daredevil: Noir). The artwork is almost its own character, as it gives the perfect mood for the situation. The tone of this book is very dark  as well and you can tell right away that they are trying something new with the vampire genre. It seems like they are mixing ancient Chinese mysticism with traditional vampire lore which, surprisingly, fits well.

I will also say that they don’t explain everything to the reader. Nothing is handed to you and this is something I applaud them for! Too many times in books and movies, things are over-explained, but this book seems to be more in the vein of another Image book ,The Walking Dead. As the story goes on we find that the only way Mei can be cured of her vampire condition is to kill the one who turned her. Unfortunately he is one of the oldest vampires in the region.

The characterizations set up in this issue are instantly understandable and recognizable. The character of John has an almost Bruce Willis meets Wolverine like swagger, while Mei is a force of nature once she turns into a Vampire, but weakened otherwise. I truly don’t want to give too much away, as it is only a first issue, but I will say that by the end of the book I wanted more. Freedman and Coker’s writing was crafted in such a way that you want to immediately continue this adventure to see if they take the fight all the way to the top and what horrors lie in between.

Final Verdict: This series looks to do with vampires what The Walking Dead has done with Zombies! Put it on your pull list and wash crappy vampires away!