One of the features we do here at Comic Impact is the cosplay girl (NO anime, manga, role-playing games just comics) of the month, that’s right hot girls dressing up like your favorite super- hero characters. This month we’re privileged to have Stephanie aka Boris for this months Cosplay Girl of the Month!

1-What is your name?
Stephanie aka Boris.

3-Do you read comics and if so, what are your favorite titles?
Yes but not as often anymore. Preacher, Sin City, Birds of Prey, Batman: Hush, Batman: The Dark Knight Returns, JLA, Spiderman/Black Cat, Marvel Zombies, Danger Girl, and most recently, Scott Pilgrim, but the list goes on regarding what I like. There are recent titles I haven’t read and have been assured by many people that they’d make it to my preferred reading list.

4-What is your favorite comic book character?
That’s a very difficult question to answer. I like characters for many different reasons. Villains are full of win, in my book. The Joker is probably one of my favorite characters in practically any incarnation. I also adore Poison Ivy and the Black Cat. I’m a Black Canary fan, too. As a kid, I wanted to be friends with Superman so very badly. And out of all the X-men, Gambit has always had a place in my heart.

6-What got you into cosplay?
Well, I never grew out of playing dress up as a kid. It was just something that I eased into. I’ve been involved with theatre and performing arts for many, many years now. Took some home-ec classes in high school and just started to make it a hobby. In reality, my first “cosplay” was actually a “crosplay” that I did when I was 15 years old.

I was watching the first Pirates of the Caribbean with a group of friends and said that I could probably make myself look like Jack Sparrow. It turned into some sort of challenge. After rummaging through my closet to find what I could throw on, putting some eyeliner on, and spirit gumming some fake dreads to my chin, I swaggered out of my bathroom and asked, “But why’s the rum gone?”

7-If you do more than one character which one is your favorite, and if you do only one do you have some ideas for more costumes?
At Dragon*Con 2007, the reception my Black Cat had with my friend, Moshi, as Spiderman, was incredible. We had such a blast walking around the con, hanging out, and telling people that we were New York’s hottest couple again. I would do the almost completely body paint ‘Hush’ Poison Ivy again, because that’s just such a fun character. My favorite costume from this past Dragon*Con (2010) was an Ironette in the group which was part of the Stark Industries group. There are many characters I love to portray and definitely many more in the works. Some comic, some not.

8-How long does it take for you to make a costume?
Should I be keeping track of this? Uh oh…I try to spread out my costuming over the months before I showcase them, but I certainly don’t keep a log book. Some I sew from scratch, patterns, and modified patterns; with others I collect various pieces and put them together. So, really, it depends on the costume and how I go about creating it. 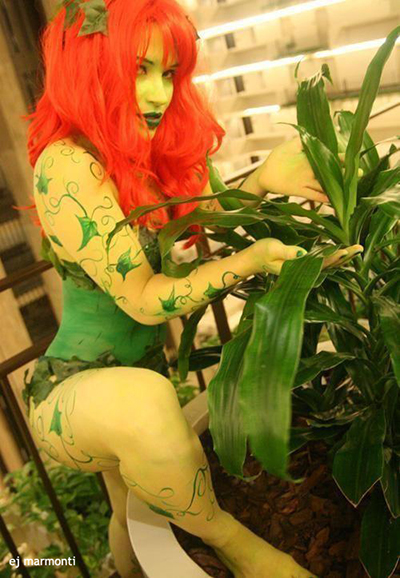 9-Have you met any of the artists or writers where your costume is based on their work?
Yep – a few. Don’t really have stories…I mean, I waved like a giddy school girl at Stan Lee. J. Scott Campbell was pretty excited to see Abbey Chase, Natalia Kassle, and Sydney Savage walk up to his table. I know this is a bit reverse, but Justin Chung based two sketch cards (Marvel Masterpieces II and Spiderman Archives) off my Black Cat – that was pretty groovy and flattering. Whenever I meet artists or writers, especially if I’m in costume, I just smile a lot, thank them profusely for sharing their talent, and encourage them to keep on doing their thing.

10-Do you buy any toys, busts and etc. based on some of your favorite costumes?
Not really anymore. Once I decide to settle down somewhere though, I’d like to create a collector’s cabinet and start collecting more figurines and such.

11-So do people know you dress up like a comic book hero on your free time?
Yeah. I embrace it fully.

12-What is the funniest thing that has happened to you at a convention?
Goodness…so many funny things happen at conventions, it’s difficult to pinpoint one thing as the funniest. One of my friends in 2007 dressed up as the “Peanut Butter Jelly” banana with maracas and we ran around the convention, late-late night/early morning, doing the song and dance. A security guard danced with him and then odd assortment of characters gathered to dance…it was such a hilarious and fun time.

Then, the characters groovin’…that’s me as Poison Ivy appearing for a short bit on the right side: http://www.youtube.com/watch?v=3WOtiv-fFLI

13-Do kids come up to you and think you are the real life character?
A couple times as Black Cat. It’s always really cute when little boys and girls play coy and really want to get a picture with you or get your autograph because you’re a “hero” to them. On the other hand, as Voldemort I’ve had kids scream and cry…so that’s the opposite of being their hero but still such an awesome reaction to get as a sinister character.

14-What do you like to do when you’re not costuming, such as other hobbies?
I love singing, acting, dancing, writing, and reading. I’m into horror, sci-fi, fantasy, fiction, serial killers, mystery, cryptozoology, mythologies, Egyptology, pirates, and history. I really enjoy cooking when I can find the time. Also, enjoy playing video games, larping, watching football and soccer, debate, and the internets. 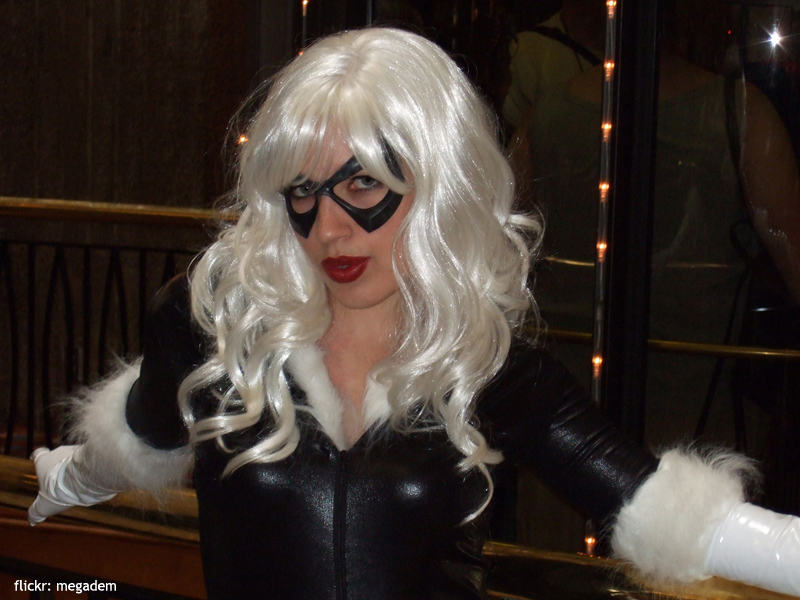