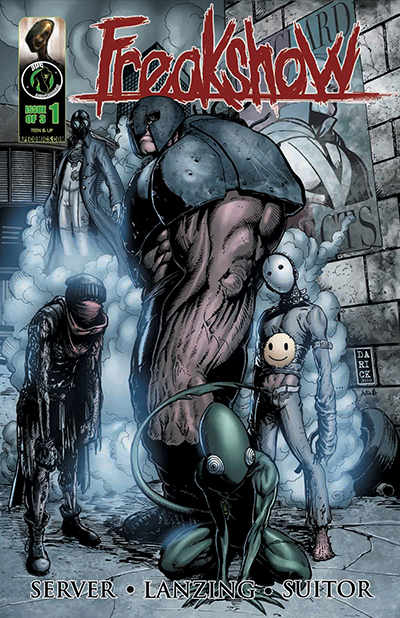 Let me take a moment to recognize all the amazing horror that has come out this month. I felt like April was a little slow and I was scrounging, but May has been a smorgasbord of wonderfully delicious blood and monsters to choose from and I have slurped up all of it! I have really enjoyed the fun titles like Danger Girl and the Army of Darkness and the books with the super gore like Edge of Doom. However, I will be discussing those in the “Are You Scared Yet?” segment of Comic Impact’s newest show, “Did You Catch All That?” For now, I will give you more of the delicious buffet of horror from which I have been feasting all month long.

First off, I am going to say that even if I did not know these guys were super awesome, I would still read their book and gush about its utter brilliance. I’m talking about a post apocalyptic nightmare that is Freakshow. I choose to classify this as horror, because it has all the action and blood that a good sci-fi horror flick is made from. More than that, I think that every good horror can be used as a metaphor for an aspect of humanity that we choose to ignore. Writers Jackson Lanzing and David Server have captured that with the perfection which only they can achieve. I would say that it’s the story of Critter, but one can argue that there are two other characters that deserve equal credit. I choose Critter, because to me he is the character that brings the metaphor full circle. He is the one to remind us that humanity is more than what it has become in this wasteland we used to call our world. Critter is also just a boy. That is really what gets me about him. Despite his mutations and powers, he is still a kid that deserves a better life than he has been given. I’m open for discussion, because there are other amazing characters that really deserve just as much credit for the action and the progression of the story. Freakshow is just one of those must reads. The second issue just came out, but try and get a hold of number one, so you can really appreciate it from the beginning.

To jump from one amazing concept to another, I would like to talk a little bit about ’68, which is a zombie book currently put out by Image Comics. It’s set in the Vietnam War. The year is 1968 (see how they came up with the title?). This is a bit of a clever concept, because it’s zombies showing up in trenches and in the heart of the war. No one seems to really know what side they are on, though I suppose we’ll figure that out during the series. I think that the story is good, but the art by Nat Jones is really what sells it for me. This book is really pretty! It has all the classic zombie looks, but they are dressed in these rad period clothes. Plus, there is a panel where rotted arms are reaching through all areas of a tunnel, and there’s really nothing like a good horror shot like that. This is just one of those books that I can totally see becoming a movie. Who would not want a Vietnam-Zom-Com? I’m just saying it’s good, and it works.

The third book that I will be mentioning here is just one of those awesome curse books. I like them so much! I am a sucker for really good mythology and even more so when it’s carried out well. Suicide Forest is all that and more. I admit that it does steal some plot points from other horror sources. However, it understood what made that source material good and expanded to make it better. I don’t care what anyone says, Japanese girls are the scariest. I do not want to be cursed by one of them – living or dead or both. This takes place in the very real forest of Aokigahara just outside Tokyo, Japan. It’s considered to be one of the most beautiful forests and statistically contains the highest suicide rate in the world. Creepy all around, right? How has their not been a horror comic about this already?! Now, Alan is dealing with an ex girlfriend who committed suicide there and is now framing him for some truly horrific crimes. Amazing stuff! Like I said, love me a good curse. 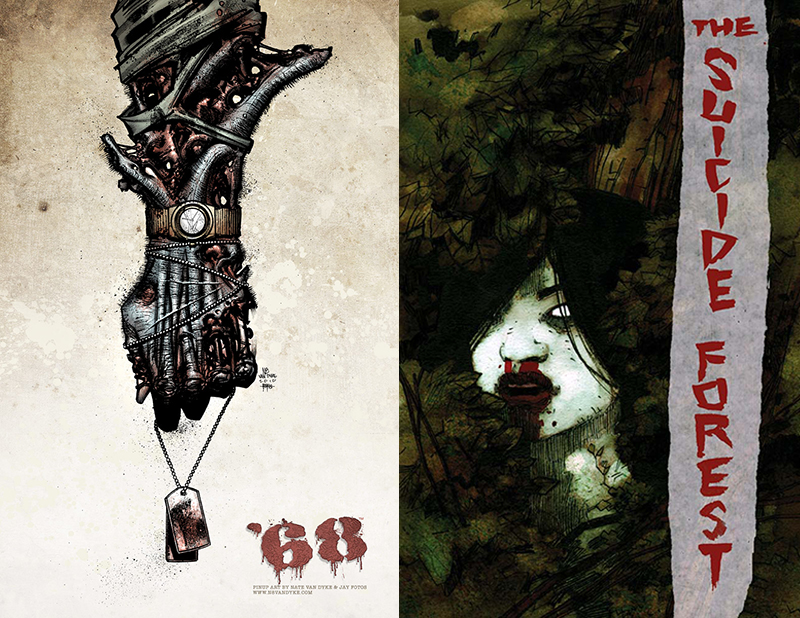 Today is FRIDAY THE 13th!!! So please, go pick up these books. Read them. Have yourself a good scare, then say good night to the world by putting in a nice slasher film (since they are strategically absent from my list). While you’re at it, pick up Joshua Hale Fialkov’s Echoes, which concluded this month, and the newly released Undying Love #2, which I have mentioned before as being awesome! So much good stuff. Until next month, I hope you’ve enjoyed May’s installment of Horror on the 13th!!!