One of the features we do here at Comic Impact is the cosplay girl (NO anime, manga, role-playing games just comics) of the month, that’s right hot girls dressing up like your favorite super- hero characters. This month we’re privileged to have Alexandra aka Shmee or Peachykiki for this months Cosplay Girl of the Month! 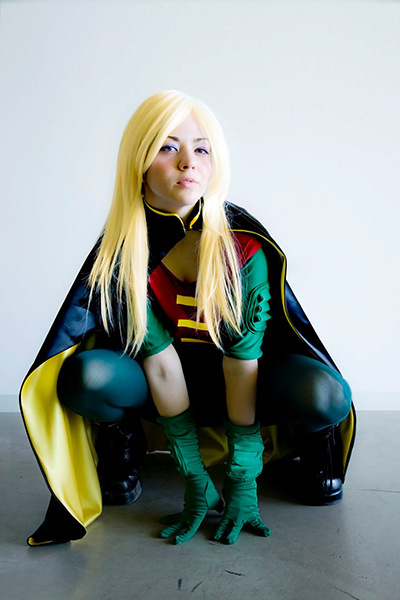 1-What is your name?
My real name is Alexandra, nicknames are Shmee or Peachykiki.

3-Do you read comics and if so, what are your favorite titles?
When I was a little girl, sometimes my dad would buy me comics at the local gas station usually X-men, but apparently those aren’t meant for little girls? Currently my pull list includes Supergirl, Black Widow, Gotham City Sirens, Batman and Robin, Generation Hope, and other titles. I have a friend who always loans me his Green Lanterns and BPRD and I like to pick up anything X-men or Spiderman that catches my eye. Some other titles I enjoy, Danger Girl,League of Extraordinary Gentlemen, Kick Ass, Scott Pilgrim, Black Cat, Black Widow, Tank Girl, Fables, X-force, Teen Titans, Black Canary, and many moreI think I’ve thoroughly devoured the collections of all libraries in my area.

4-What is your favorite comic book character?
Batman Batman BATMAN. I love him from his pointy little ears to his stompie black boots. I think my biggest life goal as a child was to BE Batman. However,favorite female would be Rogue for sure.

5-Who are your favorite artists or writers?
I’m really all about the art when it comes to comics. I have a really hard time reading a story if I don’t like the style of the artist. Some of my favorites are J. Scott Campbell, Adam Hughes, Alex Ross, Michael Turner, Ramos, ArtGerm, James Jean, Guillem March, and Skottie Young.

6-What got you into cosplay?
I had always been a big nerd and playing in costumes had been my favorite thing as a kid. There’s a few Polaroid’s that my mom loves to pull out of me as 5 year old in my Batman costume complete with cape, cowl, plastic abs, and bat shooting glove. At one point in high school a friend of mine told me there were these ‘anime conventions’ where people dressed up and I immediately began working on my first cosplay. It was terrible of course, but I had so much fun I’ve been hooked ever since. Halloween had always been my facorite time of the year and when I found out there were other occasions to wear costumes no one could stop me. I began attending comic conventions shortly after that as well. I now try with mild success to con any and all of my friends into prancing around in silly costumes with me as well.

7-If you do more than one character which one is your favorite, and if you do only one do you have some ideas for more costumes?
My favorite character to dress as is probably Rogue. I just feel like Rogue and I really click and its so easy and fun to dress as her. I also really love wearing the Ironette costume. It’s sexy, cute and it lights up! What more could a girl want? I’m currently working on making some other alternate Rogue costumes.

8-How long does it take for you to make a costume?
A lot of my costumes are made in 3-7 days because  I am pretty good at procrastinating, and I generally find out I’m going to a con and decide I have to havesomething new to wear. Usually this also means that I’ll go back and fix certain rushed aspects to make the costume better the second time around. My Ironette I first made in 2 days so I could wear it with my friends to C2E2, however I later went back and fixed a few things and added the belt buckle. My costumes are always a labor of love and I really enjoy going back and if need be completely re-making them to just makethem the best they can be. 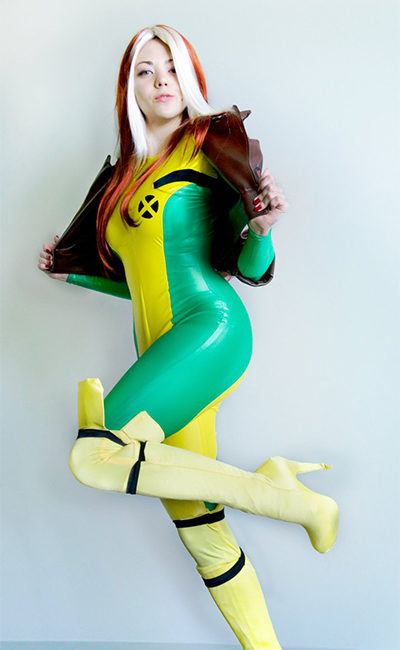 9-Have you met any of the artists or writers where your costume is based on their work?
I met Scott Campbell while wearing my Black Cat spidey dress based off his illustration, which was pretty cool. He even autographed my dress for me. I was highly honored when Stan Lee saw me in my Ironette and told me “Nice costume!” with a big smile and thumbs up.

10-Do you buy any toys, busts and etc. based on some of your favorite costumes?
I prefer the full body figures to busts. I’m currently loving the look of all kotobukiya Marvel/DC statues. I picked up the Rogue one, and I’ll probably have to get more too. I have a silly addiction to Japanese nendoroids, which are just too cute and fun to play with. I have the DC Polly pocket set, a Super Girl, and a collection of anime related figures that also grace my desk, shelves and coffee table.

11-So do people know you dress up like a comic book hero on your free time?
I haven’t really kept it a secret. I’d say anyone who’s known me fore more than a few months finds out. I’m always tweeting or facebooking about photos, costumes or conventions. My parents are very supportive and the rest of my family probably thinks I’m crazy.

12-What is the funniest thing that has happened to you at a convention?
I think I could tell a hundred con horror stories of costume-related injuries/ malfunctions, awkward moments, or passing out because I got excited and forgot to eat. However, perhaps my most amusing con experience was late one night driving back to the con from a 24-hour diner. My friends and I spotted an Oscar Meyer wiener-mobile parked along side the road. Of course I insisted we pull over and take photos in costume with the wiener-mobile. It had little wieners embroidered on the seats and license plate said “bologna1”. AH! Love it. Ilaughed so hard at those pictures.

13-Do kids come up to you and think you are the real life character?
I am always genuinely surprised at the reaction of kids to my costumes. I never thought an Ironette was a very kid friendly thing, but I’ve had so many parents take photos of me with their kids. Last year at SDCC, I was sitting down on the floor, talking to a friend when out of no where this little girl in a pink super girl costume runs over and sat down on my lap. Then she just started talking to me and it took a minute before I saw her mom standing a ways away taking photos of us. She was absolutely adorable!

14-What do you like to do when you’re not costuming, such as other hobbies?
I’m a very creative person and if I’m not working on 15 projects at once, I’m planning 300 new ones to start. I’m heavily addicted to MMOs such as World of Warcraft, DC Universe Online and others. Currently Little Big Planet is also draining my productivity. I enjoy keeping up with fashion trends, blogging, reading too many forums, drawing, photography, and the occasional craft making. Most of my summer is spent on a lake water skiing and swimming till I pass out, and although I haven’t been in far too long I love scuba diving.

15-Do you have a website or a MySpace? So people can contact you?
I do. My site is http://www.peachykiki.com and all other ways of internet stalking are available from there. 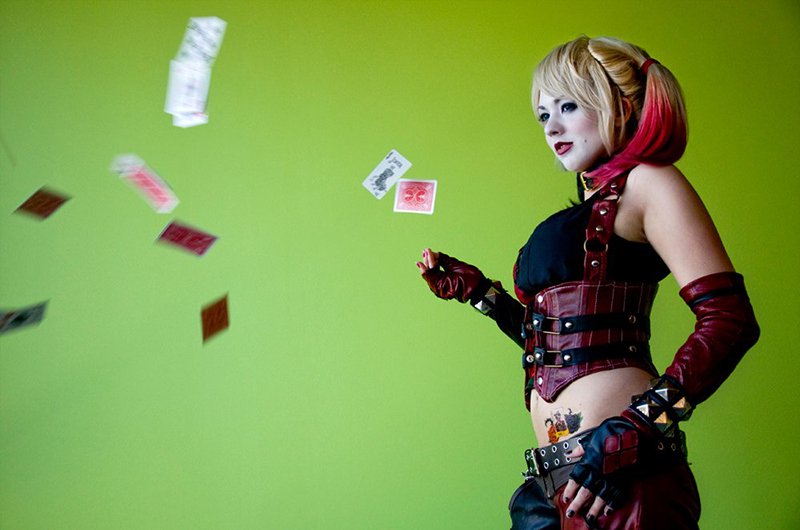