Cosplay Girl of the Month: November 2011

One of the features we do here at Comic Impact is the cosplay girl (NO anime, manga, role-playing games just comics) of the month, that’s  right hot girls dressing up like your favorite super- hero characters. This month we’re privileged to have  Gillian aka. Gillykins  aka  as our Cosplay Girl of the Month! 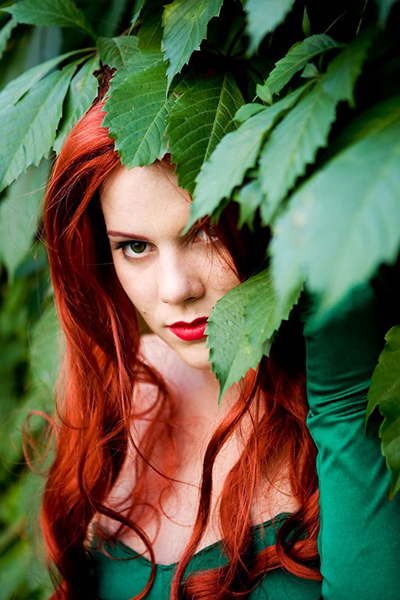 1-What is your name? Gillian aka. Gillykins

3-Do you read comics and if so, what are your favorite titles? I have a major love affair with anything and everything Batman! I’ve been keeping up with most of Batman and Robin as well as The Road Home.  I’m also a big fan of Zatanna and Birds of Prey, I’ve also loved Gotham City Sirens and the collection of Jokers Asylum one shots.  My roommate has introduced me to my two new love affairs, Transmetropolitan and Fables.  If I could I would spend all my time and money on reading comic books.

4-What is your favorite comic book character? I’ll love Bruce Wayne to the very end, he is my favourite character all round.  It’s thanks to him that my infatuation with comics has exceeded beyond just watching Batman: TAS on Saturday mornings.  I’m also a big fan girl for Poison Ivy; I love her feminist, eco-terrorist approach to villainy.  As well as her complex relationships and actions with other villains, I love manipulative women.

5-Who are your favourite artists or writers? Paul Dini and Gail Simon never fail to give me what I want.  I really enjoy the writing style of Warren Ellis and Alan Martin, I can easily binge read their work and not get bored. My top three favourite artists are Adam Hughes, Dustin Nguyen and Jim Lee.

6-What got you into cosplay? If it wasn’t for my partner in crime and current roommate Meaghan I’m not sure if I would have had the confidence to start costuming.  I started going to conventions when I was fifteen years old, so many people were in costume, it was amazing.  Meaghan and I decided we were missing out on something by not dressing up, so utilizing my basic sewing skills and an awesome friendship this expensive and addicting hobby began.

7-If you do more than one character which one is your favorite, and if you do only one do you have some ideas for more costumes? Oh what, I can only choose one? I will love my Zatanna costume till it implodes!  Zatanna was a costume I had always wanted to make but didn’t have to skill to, with a stroke of pure luck I came across a beautiful vintage tail coat which is the core component of the outfit.  I’m in a constant state of updating and altering my Zatanna costume, so expect to see me wearing it at conventions for years to come!  I always have more plans for costumes; I have a folder full of ideas sitting on my computer. The next costume I’m working on is going to be Huntress, my plan is to fully finish it work Dragon Con 2011, as you can tell I’m giving myself plenty of time to get it done.

8-How long does it take for you to make a costume? It really depends on the costume, for some I can bang them out in a day or two but others take a couple weeks or months of drafting, sewing, seam ripping, fitting, crying and finishing.  I usually take a while to hunt down the materials I want; I’m always on the hunt for deals which usually means a lot of online searches weighed against multiple trips to the fabric district in Toronto.  In the end my costume are really made possible by the gallons of tea I consume during the entire process, it’s all a matter of keeping the inner seamstress happy and awake. 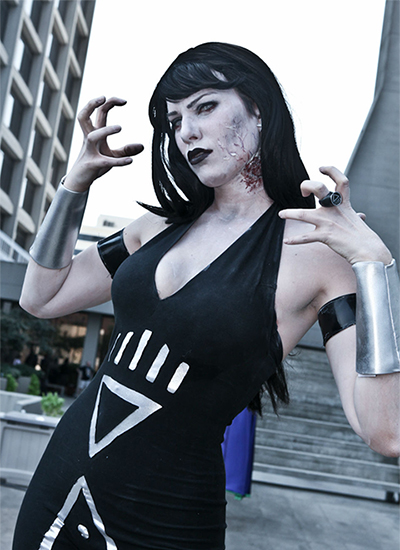 9-Have you met any of the artists or writers where your costume is based on their work?  I’m pretty sure I’m always the most excited person during any meetings, I have the habit of meeting artists and writers when I’m not in costume, I just can’t seem to plan my meeting properly.  I did meet Jim Lee while wearing Zatanna and the part of our conversation which I remember is ‘WOW YOUR TALL’, I’m around 6” in heels and Jim Lee isn’t the tallest to begin with… I look like a giant in our photo together.

10-Do you buy any toys, busts and etc. based on some of your favorite costumes? If I had more money I would own ALOT more statues and figurines than I already do. My pride and joys are my Zatanna and Catwoman statues from Cover Girls of the DC Universe.  As well as my Women of the DC Universe: Batgirl Bust and the Series 2: Catwoman Bust.  I also love Mighty Muggs, there is a substantial collection of them parading across the cabinet in my dining room. I’m hoping to get more of the large Cover Girl series statues as well as one of the black and white Batman statues.

11-So do people know you dress up like a comic book hero on your free time? It isn’t something I tell people right off the bat when I meet them, though it’s near impossible to hide the fact I read comics.  Thanks to Facebook it’s a lot easier for people to find out about my hobby, my cousin didn’t add me for the longest time because he didn’t think that the profile picture of someone in costume was me.  I’ve made a lot of friends in the costuming community; almost all of my closest friends come to conventions with me and also dress up.  It’s because of my friends that I keep going back to conventions again and again.

12-What is the funniest thing that has happened to you at a convention? Most of the funny or silly things which happen at conventions become an inside joke in my group of friends such as our infamous ‘House Keeping!’ joke, our Dragon Con pictures with Phil head or a guy would followed me around in costume saying things like “OHHH GIIIIIIRRRL YOU SO FINE”.  Almost every convention leaves me with a situation that has me rolling in laughter with my friends for months.

13-Do kids come up to you and think you are the real life character? I get lots of children thinking I’m a real superhero, I think my height adds to the persona.  More than a few times I’ve had children ask for my autograph in character, I do my best to write them a little in character blurb and signature since isn’t usually to adorable to refuse.

14-What do you like to do when you’re not costuming, such as other hobbies? When I’m not costuming I’m usually kept busy by school, with plenty articles, case studies and essays to write.  Outside of school and costuming I split my time between my friends, family, work, video games, reading comics, working out and cooking delicious food.

15-Do you have a website or a MySpace? If you ever see someone on a forum or Xbox live going by the alias gillykins then it’s more than likely me!  I update my deviantart with all my costuming stuff as well as what conventions I’m going to. 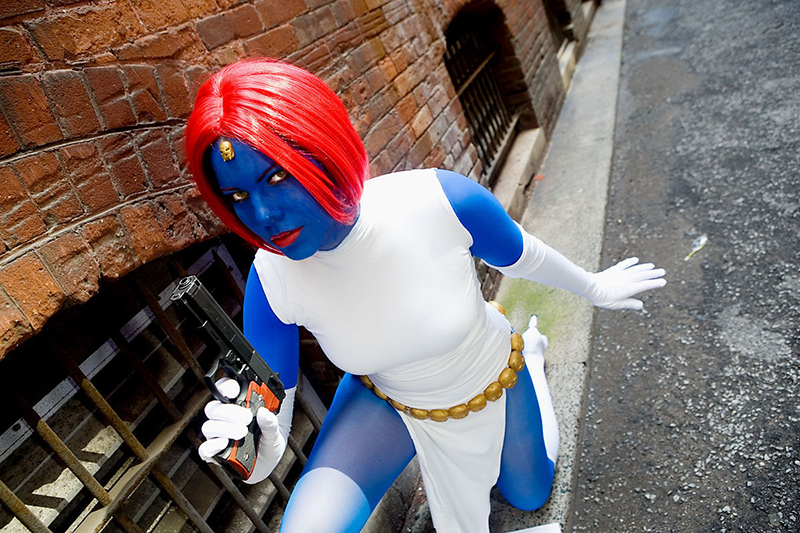