We live in a society where mass consumerism has reached a terminal world-wide breaking point. We pretend to be aware of the negative effects of over consumption, both to our personal well being and to the planet we call home, but we continue on, completely unabated in our gluttonous self-indulgence. If art is a reflection of the times we live in, I can think of no better contemporary artist to put up the mirror to our less than responsible ways than Ron English. 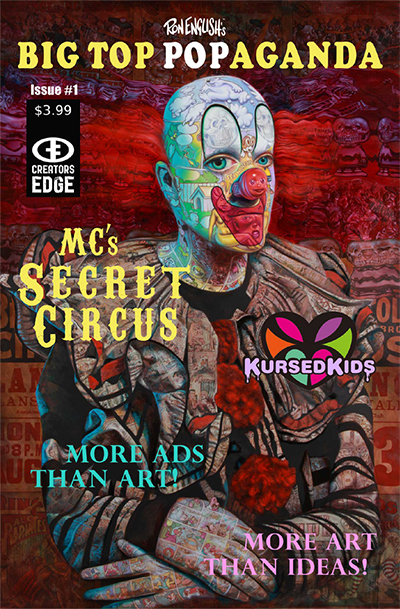 A leading figure of the Pop Surrealism art movement, English’s work continually challenges the sacred cows of both greed-fueled megacorporations and the endlessly sensationalistic modern mass media to a gloves-off conceptual throwdown. This is a fight in which the financially powerful elite could, if they chose to, come clean about the ways in which they manipulate the masses to amass their considerable fortunes. Obviously this is not going to happen any time soon as these kinds of confrontations are not played out on any kind of level playing field.

This is why an artist like English will get his message to the people by any means necessary, be it guerrilla street art, gallery exhibitions and, in this case, comic books. Recently released from Creator’s Press, Ron English’s Big Top Popaganda #1 may very well be the most unexpected and whole-heartedly welcome release of the year for indie comic fans who also have an liking for rabble-rousing underground artwork.

English is widely renowned for taking pop culture icons and corporate logos and turning them against themselves. Of these his most famous is likely MC Supersized, an obese clown and fast food spokesman who clearly has never met a nugget of ground up chicken parts deep-fried in boiling animal fat that he didn’t like.

It is MC who narrates and stars in the comic story which encompasses the first half of Big Top Popaganda titled Too True To Be Real, Too Real To Be True. In it, MC is a young man in charge of the members of a traveling freak show. Unbeknownst to him, their newest recruit is an alien whose intuitions toward mankind will later be seen as less than noble. The alien, upon seeing the sideshow’s fat lady, devises a master plan to fatten up the potentially tasty human race: set up hamburger stands in each city they pass through to peddle incredibly unhealthy fast food as fun family fare.

I’d like to note the unique stained and aged look given to the high-quality paper Big Top is printed on. It gives the pages the appearance of a decades old comic left to rot in a long neglected corner of a damp basement.

The majority of the last half of the book is a heady mash-up of ad parody and social commentary  that communicates extremely strong messages in the most economic fashion possible. In the past, English has been known to alter billboards and other forms of public advertising with his own subversive changes, at times in a sly enough fashion that only the observant among us may notice the subtle change that has taken place.

Also in the latter pages of Big Top you’ll find the Kursed Kids, a collection of freaks that will simultaneously strike you as both oddly familiar and utterly alien.

There is very little wasted space found within the head-spinning pages of Big Top as even the book’s back cover contains an powerful, detail heavy image that says much about a capitalist society which has made television and materialism the preferred forms of worship.

If you’re looking for something a bit more meaningful (yet still very entertaining) from your local comic shop shelf, look no further that this inaugural issue of Ron English’s Big Top Popaganda. It’s an eye-popping look at a consumerist culture that may have veered wildly out of control, but still can be prevented from going completely over the edge. There is no need to continue buying high fructose corn syrup infused surgary cereals when this book has enough eye candy in it to keep your brain amped up for a very long time.