You want the horror? Well it’s your lucky day because it’s that time of the month where we point our fingers in the direction of the gore and set you loose in the world to find it. 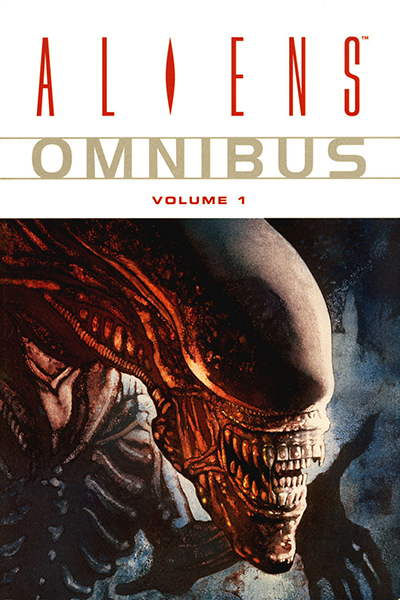 Doubtless you’re familiar with the recently released movie Prometheus by director Ridley Scott? If not then you probably need to get out more. This film has been bringing in a fair amount of mixed reviews lately; some hate it, some love it. But I’m not here to talk about Prometheus, oh no, I’m here because I can tell that you fine people want more bloody Alien goodness. I can see the hunger in your eyes. It’s saying you don’t just want science-fiction, but you want some well written science-fiction horror!

Let’s cast our minds back to the Alien movies of the past. James Cameron’s Aliens or perhaps Aliens 3, we’ve all got memories of seeing these films for the first time regardless of whether we liked them or not. Well if you’re after something more down that alley then let me present to you the Aliens Omnibus, Vol. 1 from Dark Horse Comics. This gem is filled with three meaty stories (Outbreak, Nightmare Asylum and Female War) and comes with two additional back-up stories which are a bit shorter but give you a clearer insight into the Xenomorphs and so on.

Originally published in 1988, for the most part these stories follow the characters Billie and Corporal Wilks (originally written as Newt and Corporal Hicks from the films but re-written as Billie and Wilks after the former pair’s deaths in David Fincher’s film Aliens 3) as they find themselves together once again, facing a shared fear and common enemy from past struggles in their lives. In the second story Nightmare Asylum, Ellen Ripley appears as a main character, showing that these stories will have a familiar feel for fans of the franchise.

Mark Verheiden writes all three stories with a perfect understanding of what the atmosphere needs to be like in an Alien story. These comics flow like one of the movies and are a pleasure to read. Mark’s ability to capture in words the weaknesses and struggles of the mind to come to terms with the fear produced by the alien encounters is remarkable. Plot wise the stories deal with some big ideas such as the complete invasion of Earth by aliens because of actions taken by a religious cult who are obsessed with the aliens for being a ‘superior race’. Artistically Mark A. Nelson, Ben Beauvais and Sam Kieth do a fantastic job on each of their stories. Their art styles are definitely a sign of the times these stories were written. The style of comics drawn in the late 80’s and early to mid 90’s is not often a thing many of us would like to think about ever again, but each artist present in this omnibus are a pleasant reminder of what was decent and easier on the eyes during those years.

The layouts hold together well and the pages are busy, busy busy. When the aliens appear the horror and detail in their design is captured well enough to put a smile onto your face. Visually these are very dark comics with frequent use of solid black backgrounds and dim lighting, especially in Nightmare Asylum and in parts of the third book, Female War.

These comics get straight to the heart of the Alien mythology and Verheiden does not shy away from introducing and including the Space Jockey (or should I say Engineers now?) race as an integral part of the story. The designs for that race however are particularly awful so I won’t dwell on this for long, but if you do get your hands on a copy of this book just try not to kill yourself when you see how they’ve been drawn. 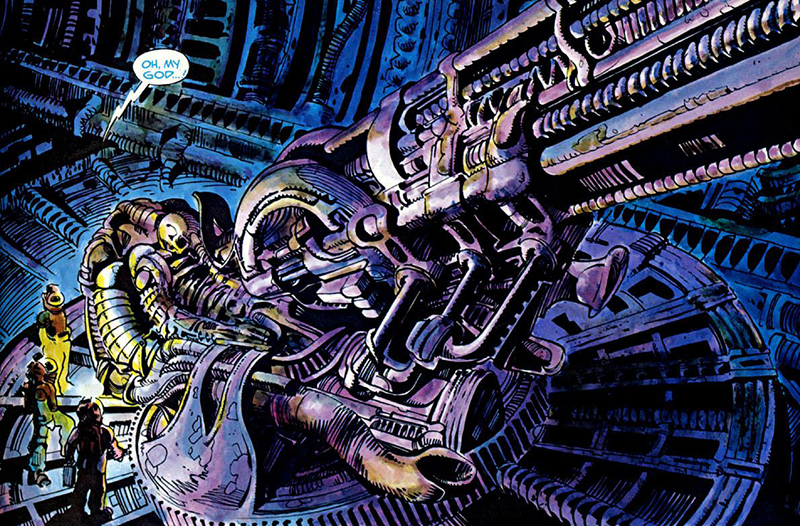 As well as being fine additions to the Alien franchise, these comics remind me a lot of Starship Troopers in places, but not in a bad way if that is at all possible. The more human and psychological sides of the stories remind me of films like Moon by Duncan Jones.

If you want to continue exploring the Alien mythos and Universe then check out these stories and the following stories too. They are good and do not be put off by thinking that these can just be included in the nonsense you’ll find in the 50 cent bin. These are not toilet reads, these are to be enjoyed and can be enjoyed! Get reading and remember how it felt to see facehuggers hug, to see a chestburster burst. Or to just see a couple of xenomorphs cleverly hunt down and destroy a team of well-equipped, trained marines.

Oh, and did I mention the blood and guts? Sorry if I missed that out!