Cosplay Girl of the Month: August 2012

One of the features we do here at Comic Impact is the cosplay girl (NO anime, manga, role-playing games just comics) of the month, that’s right hot girls dressing up like your favorite super- hero characters. This month we’re privileged to have Anti Ai-chan  for this months Cosplay Girl of the Month. 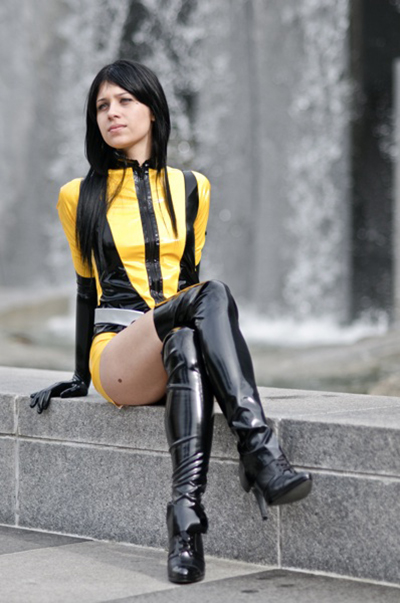 1-What is your name?
Steff, but better known as Anti Ai-chan.

3-Do you read comics and if so, what are your favorite titles?
I really enjoy Batman so some of my favorites are The Long Halloween and the Knightfall series. I’m also a fan of The Sandman; my favorite volume being Brief Lives. Other comics I’ve really enjoyed are Thor The Mighty Avenger, Watchmen, and Tiny Titans. Yes, I said it, Tiny Titans.

4-What is your favorite comic book character?
Oh man, it’s hard to pick just one and I honestly don’t think I can. I like Stephanie Brown because she’s very head strong and quirky so I can relate to her a lot. I also have a soft spot for the other Robins with Dick and Damian being a tie for first place. I can’t choose between them because they are nearly polar opposites in everything they do which makes them working together a great read. I also really like Loki because as a character, you just never know what he’ll do next.

5-Who are your favorite artists or writers?
When it comes to writers, I enjoy Grant Morrison, though many people seem to disagree. I like that he takes bits and pieces of continuity to almost form a new world. His Batman and Robin series is something I can read over and over again and not get tired of. I also enjoy Neil Gaiman because he has such a way with words. He doesn’t just give you a cool story or interesting characters or a fun concept; he gives you everything and more packed nicely in one little book. As for artists, I like Chris Samnee who did Thor The Mighty Avenger. The artwork was actually the reason I picked up the book. I also enjoy Dustin Nguyen and Jill Thompson.

6-What got you into cosplay?
A friend had asked me to accompany her to Anime Expo 2003. I was really into anime and manga then but had no clue about conventions. When I went home I looked it up on Wikipedia (since it knows all) and stumbled upon cosplay. I’ve always enjoyed costumes and I consider myself to be a pretty crafty person, so when I discovered the hobby I knew it was an instant fit. I dressed up for my very first con not knowing what to expect but apparently I enjoyed myself since here I am, nearly ten years later still dressing up as cartoon characters.

7-If you do more than one character which one is your favorite, and if you do only one do you have some ideas for more costumes?
Oh man, I’ve done over sixty costumes so choosing a favorite is impossible. Each costume gives me a new experience whether it be the sewing process, wig work, prop making, meeting new people or just being silly as the character. I had an absolute blast being the Warden from Superjail and the rest of my Metalocalypse group is so fun to be around. I enjoy cosplaying derpy characters since that’s how I am normally but it can be fun to dress as someone completely different than yourself too.

8-How long does it take for you to make a costume?
That really depends on the costume. I’ve busted out my Damian Wayne Robin and Burt Ward Robin in a matter of days while other costumes, such as Ymir from Queen’s Blade, took me weeks. My Hit-Girl costume overall took me the longest probably. Not because of the time that was spent creating it (though all the patch work did a number on me!) but because I would work for a bit and then put it aside for a couple of months, then, eventually take it up again. It took me nearly a year and a half to finally pull it all together. 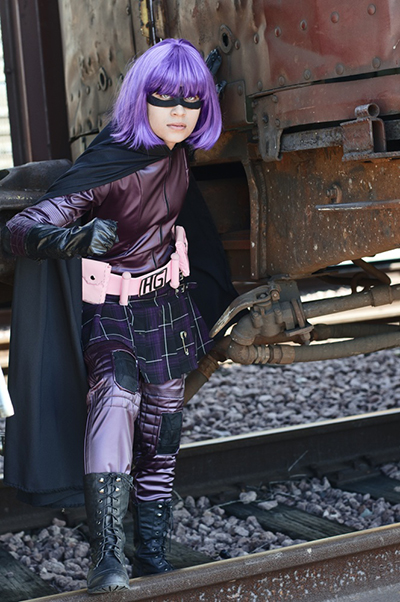 9-Have you met any of the artists or writers where your costume is based on their work?
I’ve met the designer and sculptor for my Ame-Comi Robin costume which was an unexpected surprise last year at San Diego Comic Con. They really enjoyed my costume and I was able to pose for a bit with them and the figurine. They even signed my costume and have asked me back with a group for this year! Mark Miller has also seen my Hit-Girl costume and a friend was able to get him to sign it at Kapow this year. Neil Gaiman has also seen my Delirium and has approved of it, which totally made my year.

10-Do you buy any toys, busts and etc. based on some of your favorite costumes?
Yes, because they are great having as a reference while actually making the costume. I own Ame-Comi Robin, a Ymir Revoltech and several Asukas (Neon Genesis Evangelion) that I hope to make at some point.

11-So do people know you dress up like a comic book hero on your free time?
I don’t always tell them specifically that I dress up as a fictional character for fun but it’s heavily implied. Most people know that I sew, am into comics and go to conventions. They just need to put the pieces together. Though because of this, people have overly high expectations for my Halloween costumes.

12-What is the funniest thing that has happened to you at a convention?
Hmm… I’m not sure if it would be considered funny but I’ve played Just Dance with a cosplay group twice now. The first was at WonderCon 2010 where I was dressed as Toki from Metalocalypse and we had our Nathan, Pickles and Murderface all dance to The Bird Is The Word. I laughed so hard my Fu Man Chu fell off. The second was San Diego Comic Con 2011 where I was Robin and had my friends as Batman, Nightwing and Harley Quinn dance to Barbara Streisand. Another friend recorded us doing it and I put it on Youtube right after the con. It just reached 20,000 views! I can’t believe so many people have watched us dance like losers.

13-Do kids come up to you and think you are the real life character?
A few times! I wish it happened more often because that’s one of my favorite aspects of cosplay. I think my favorite moment was when I was Harry Potter and this little boy came up to me and wanted a picture with me. He was thrilled when I let him hold my wand. Moments like those are priceless.

14-What do you like to do when you’re not costuming, such as other hobbies?
Who has time for other hobbies when you have to sew all the things? I actually really enjoy making YouTube videos; film in general really. I enjoy vlogging about my life and have recently started a community channel with four other wonderful people where we talk all things nerdy called G33ksoftheWeek. I’m attempting to expand from vlogging to actually making short films but that is a very slow process, especially being new to all the equipment. For now, I’ll keep writing creatively and watching films on the big screen.

15-Do you have a website or a MySpace? So people can contact you?
I am most active on my Facebook: facebook.com/AntiAiChanCosplay
But I also frequent other sites such as: 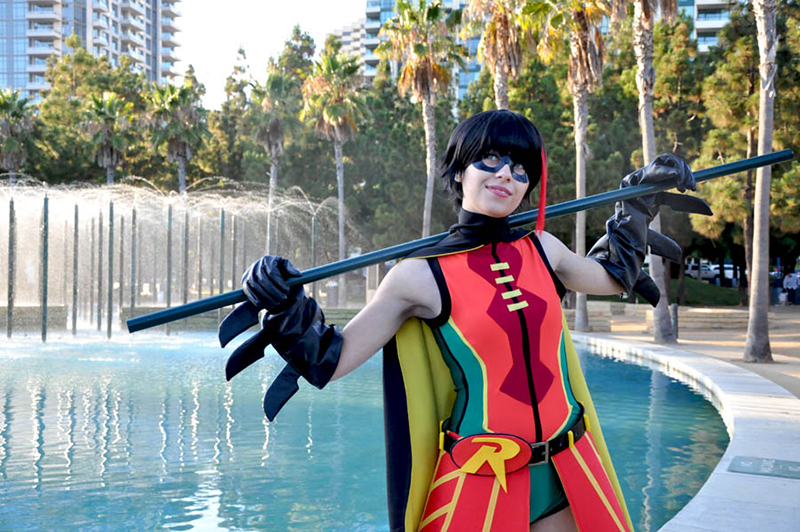