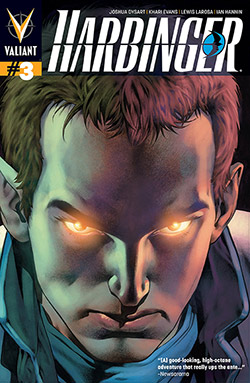 Valiant hasn’t been this good since, well, ever! That is the first thought I had as I opened up Harbinger #3 written by Joshua Dysart with art by both Khari Evans and Lewis Larosa. I don’t mean that in a negative way at all as I loved both XO and Turok when I was younger. It is more the way that they are approaching every single aspect of every book they put out now. They are paying close attention to the small details and crafting a universe that, in all honesty, is like nothing on shelves right now.

If you listen to the Podcast you know that I wasn’t exactly blown away by issue 1 and issue 2 was only wrapping up events in issue 1. Don’t get me wrong I thought the art was excellent but the story lacked the deepness that I was expecting from this title….until I read issue 3! Now because this is a advanced review I won’t spoil all the great little details put in by Joshua Dysart but I will say this. It grows the character of Peter Stanchek as well as the Harbinger Foundation and turns Peter into less of an uncontrolled victim. It specifically hints at a much deeper and interesting world. These little changes are enough to make this book go from good to unforgettable in just a few pages. This issue also touches on things in Peters past and it touches on why Harada is so desperate to take him in and give him guidance.

FINAL VERDICT: At this point you should have EVERY Valiant comic on your pull list if you don’t then you are missing out. Harbinger looks to be on track to be one of the best in a sea of already some of the most beautifully drawn and meticulously crafted comics I have had the pleasure to read in a VERY long time!