When you read a Grant Morrison comic you never know what you’re getting yourself into, and that includes runs on huge big two comics like Batman or X-Men. So when he’s writing comics that are original ideas where he doesn’t have editorial telling him he can’t use this character or this needs to happen so that something else can happen over there. So when creators who are known for out there ideas for a reader it’s always exciting to see them get the free reign to do whatever they want. So when I heard about Morrison and Robertson new book at Image I was looking forward to it but I also didn’t read anything about it because I wanted to go in blind, but since this is a review the next few paragraphs will contain spoilers. 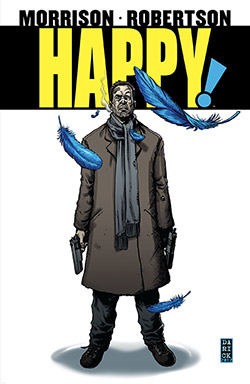 With a title like Happy! I didn’t really know what to expect. I was expecting something to do with emotion but it’s not until the end of the issue that you find out what Happy! is referring to. I do have to comment on the cover though. I think it’s awesome. Covers are as much of the story and the comic as much as what is on the inside. There’s man in a trench coat and a scarf, he is holding 2 guns and looking up as a few blue feathers are falling. The colors on the man are very muted, brown, black and other dark colors contrasting on a white background with the title of the comic above in yellow, and those bright blue feathers. Now you really can’t tell what the comic is about by looking at the cover but I will tell you that it catches the eye and I bet if you see Morrison and Robertson’s name on the comic as well you’ll at least pick it up and flip through it.

The story follows the man on the cover, by the name of Nick Sax, but before we get to him we are shown 2 brothers walking down the street in a snow covered city talking about this man Nick Sax and how they’re going to kill him. As they’re walking down the street to where they’re suppose to make the hit the run into a drunk, strung out horrible looking Santa Clause, indicating it’s around Christmas time. Then the 2 brothers proceed to go in this 2 to 33 page dialogue using the “f-work” and “c-word” every other word. I don’t mind cursing, it doesn’t bother me at all and I usually never notice it but this is so blatant that I had to make a note of it, yes, this book is not for the light at heart. Then we’re introduced to Nick Sax who breaks into the room of a man dressed a cockroach and shoots him in the head to the unexpected surprise of the prostitute that was pleasuring the man. Sax reveals to the woman that the man was going to kill her when he was finished and that he saved her life, then he gives her a task to do and walks away from her.

We meet up with the brothers who walk into the place where Nick is suppose to be but they see 2 men dead, tied up with a sign on them that says to answer the phone. The phone and it gets answered and Sax reveals to one of the brothers that he was hired to kill him and his brothers but the hard part was to get them all in the same place so he hired the brothers to kill him. Then we get a distraction from the hooker in a sign that says ‘behind you’ and Sax kills the brother that he was on the phone with and before he kills the other brother, he pleads for his life by offering Sax money saying that he has a password that can get him a fortune. Sax laughs it and just shoots him. Sax was also shot and as he walks out of the building he collapses in the middle of the road.

Sax gets picked up by an ambulance and they revive him after giving him morphine and other drugs, this is the point in the comic where he starts seeing blue feathers falling on top of him and then the eyes and ears of this blue creature. The surviving brother, Mike, is getting pulled in to an ambulance and tells the cop, who seems to be on his family’s payroll that Sax knows the password to get to the fortune. Sax doesn’t know the password, but this leads to his uncle telling a man, Mr. Smoothie to go torture the password out of Sax in the hospital.

In the hospital Sax finally sees the blue, flying, baby donkey creature and reveals that he’s Happy the Horse and that he’s Hailey’s imaginary friend that tells him they go have to help her because she’s in bad trouble and he tells Sax that this is very important and that they have to leave because they’re in a mob run hospital and they’re coming for him. One of my favorite parts of this comic is that it throws all the questions one would have about the whole thing right in your face and the funny, and I use that word purposely, is that this is all asked by Happy the Horse! He’s the one telling Sax that this whole situation is weird for him and that he can’t explain it but that they need to help Hailey. Who’s Hailey? We don’t know yet but I’m seriously looking forward to reading more because I don’t know where this comic is going to go but I’m right there along for the ride.