Invincible is a comic I’ve been reading since the beginning of its debut. One of the reasons I like it so much is because of Kirkman and his talents as a writer. He was always great at bringing back storylines he brought up in his comics even if it was long after they were brought up. Many issues back Monster Girl and Robot disappeared to another dimension to take care of some aliens that attack Earth every so often, once and for all. After a few issues Monster Girl and Robot came back and they were changed, before they left they were a couple and when they came back they had broken up because of something that happened between them. 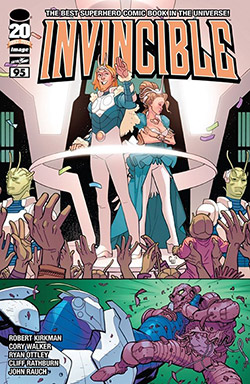 This issue starts right where the last issue ended and we finally get to see the story of what happened between Monster Girl and Robot. I’m not going to spoil anything but I will say that Kirkman does a great job with this issue. He takes his time telling the story and this is the only story we get in the issue, no Invincible, no cuts to other characters like Allen or Eve, just Monster Girl and Robot. It was a very beautiful story that takes a look at all the problems that happened between them and their relationship but also going out of the way to make sure that we aren’t blaming one over the other, which I think is important if you any of these 2 characters are your favorites.

The art in this book is also just awesome. Cory Walker being the co-creator of Invincible has stepped away from the book after his initial 7 issues but he’s come back to the world of Invincible every now and then so it’s always a treat to see him come back and draw the series he created. Ryan Ottley also has some pages in this comic which are fantastic. Ottley has always been able to draw dynamic action scenes in this comic, ranging from super hero icons to bloody battles where people are taken apart. I also like bringing in Walker to do part of the issue because then it gives Ottley a chance to catch up and make sure that the next arc of Invincible will be coming out on time as it will take up past the issue 100 mark.

Invincible has always been one of my favorite comics and I love when Kirkman takes an issue to tell an important character story, especially when it’s with characters that aren’t the main, main characters. If you’re a fan of Invincible then this is a story you’ve been waiting for and it does not disappoint.