Sometimes creators get introduced to a comic really young and those comics make a huge impact on their life, for example, Boo Cook, who currently works on Dredd for 2000 AD as well as Richard Starkings’s Elephantmen at Image comics, became a fan of Dredd at a very early age.We are lucky enough, here at Comic Impact, to have Boo explain how Dredd has changed his life and why , he thinks, you should run out and see the new Dredd 3D movie! 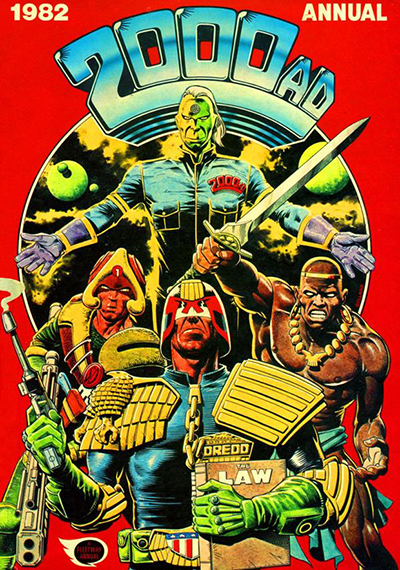 I first came across the awesomeness of Judge Dredd in 1981(I think) when I was 9. I was round my pal’s house and he had a whole bunch of 2000AD ‘progs’ which we were diving into. that first stuff that i read was from ‘The Judge Child Quest’ which frankly blew my mind in one sitting. I can still remember being gobsmacked by the crazy inventiveness of the characters and artwork – Filmore Faro and his crazy trash empire drawn by Ron Smith is the very stuff that still stucks in my mind when i reminisce about sitting there buried under the ‘thrill powered’ progs.

I didn’t get a subscription straight away – I think I asked for the 1982 2000AD annual (which featured an incredible fully painted Bolland Dredd strip), by which point I knew a life long devotion to the comic was on the cards.

The time period that I hopped on was a big era for artist Ron Smith – while not being my ultimate Dredd artist  (don’t get me wrong, he is superb!) that era gave an amazing insight into Mega-City One itself. soon came such crazy characters as Citizen Snork, Dave the Orang-outang (mayor of mc-1!) Bob, Carol, Ted and Ringo – a family of tyrannosaurs etc… Ron’s portrayal of the city was intense and hilarious – it got me further hooked…while reading the weekly progs, Eagle comics were reprinting Dredds early epic adventures with the most amazing covers by Brian Bolland – I lapped these up and filled in the blanks of the Dredd back story with gusto. among these reprints were such stories as Block Mania/The Apocalypse War – possibly my favourite ever Dredd epic – and I DO mean EPIC. the character’s brutal tenacity in the face of impossible odds is amazingly exemplified by Wagner and Ezquerra in this tale of mass devastation – the repercussions of which are still reverberating in current Dredd stories about 30 years later!

The Cursed Earth saga is a more colourful and imaginative outing in terms of wacky characters and scenarios, but Dredd’s grim determination is still very much in evidence, especially in the last part as he literally crawls the final leg of his journey across the irradiated desert, confronting his demons on the way.

Dredd stories are as much about the supporting cast of characters as they are about ‘Old Stoney Face’ himself – some of them judges; Anderson, Giant, Hershey, Guthrie, Mc.Gruder to name a handful – some of them perps; the sky surfing anti-hero Chopper, the Dark Judges, the Angel Gang, the Judda, Trapper Hag and about a billion others – all of which sprang from the mind of writer and Dredd creator John Wagner.

You can’t talk about Dredd without mentioning Wagner. to have kept the character of Dredd going and the ideas flowing for over 35 years is possibly one of the most amazing feats in the history of comics – and he shows no sign of slowing either. although the feel and style of the stories have evolved with their audience over the years the ones currently in the prog are among the best there’s ever been – the recent Day of Chaos saga proving to be a slow burning shocker that rivals any of Dredd’s previous exploits in terms of quality – here’s to the next 35 of years of Wagner!

Obviously the script is only half the story – over 35 years Judge Dredd has helped build the careers of some of comics finest talents including Dredd creator Carlos Ezquerra, Cam Kennedy, Mike Mc Mahon, Brian Bolland, Brendan McCarthy, Jock,and Henry Flint to name but a few of my favourites who’ve been forming and influencing my own art style over the years… 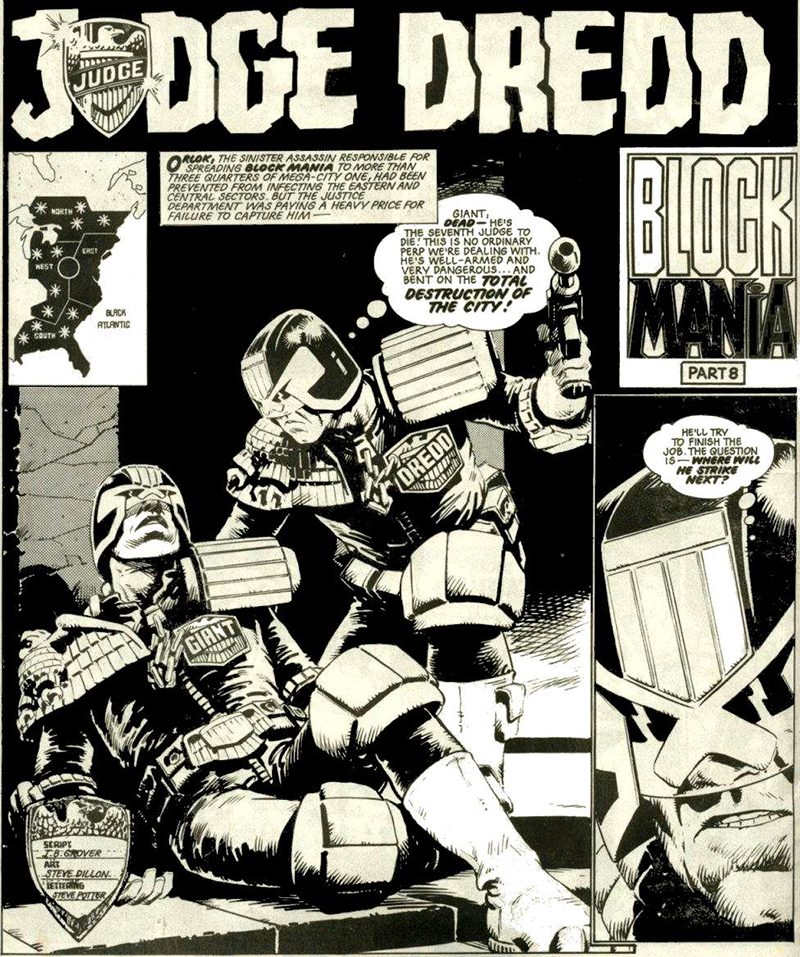 If you haven’t been to see the new Dredd 3D film, i can’t recommend it highly enough – while having a tweaked visual style from the comics it truly and faithfully encapsulates the feel of the comic Dredd (unlike a certain other film), and takes no prisoners in terms of grit and gore. despite the harsh brutality of it there’s a strange psychedelic beauty permeating the film and some superb performances from the cast – not to mention the totally bad-ass soundtrack!

If you have seen the film but haven’t got stuck into the comics yet you’ve got a mighty mega pile of 35 years of Dredd to digest – as i mentioned before, Block Mania/ the Apocalypse War would be my personal fave with the The Cursed Earth, Judge Child Quest and Day of Chaos being close behind, but quite frankly it is ALL good… get down to your comic store, pick up a bundle of Case Files and buckle up for a seriously crazed, anarchic and creatively mindblowing ride!

If you want to follow Boo and his amazing artwork check out his official blog and tumblr site.