Turtle Power is BACK!!!

At San Diego Comic Con this year I saw a few people dressed up as Teenage Mutant Ninja Turtles and I thought wow, those are some great cosplayers…… but I had no idea that a few months later one of my favorite childhood cartoons would be back on the air and possibly even better than before. 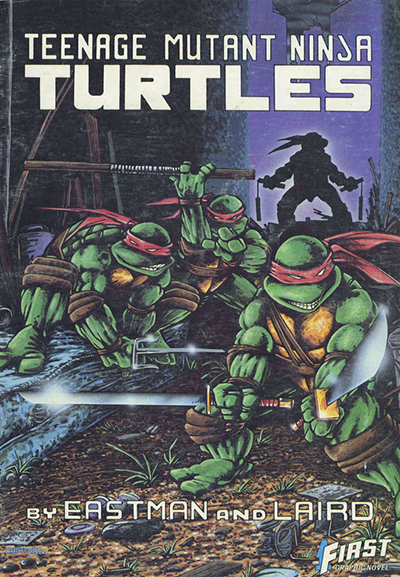 I was first introduced to the Turtles like many of us, from Saturday morning cartoons back in the late 80s. I remember spending hours outside of my backyard as a child playing with my best friend with those old school Ninja Turtle action figures. My mom would bribe me if I went shopping with her that she would get me a action figure or comic at our local mall here in Los Angeles.

After a few weeks of this I had all the turtles I wanted in my collection. I still wanted to know more about them and one day I went to the bookstore and I found these oversize graphic novels by First Publishing featuring everyone’s favorite Turtles: Michelangelo,Leonardo,Rafael and Donatello. There was something different about those books though, they each had the same color red bandannas and I was asking myself “Is this just a knockoff of the Turtles?”

It took me a few weeks to find out that the original Turtles all had red bandannas and I was really intrigued by that. Remember this was in the late 80’s so there was no Internet where I get that Information  so I went to my local comic store and I remember asked the shop owner Roger why they were different then the cartoon. He explained to me that they changed their colors of bandannas for television so that fans could more easily tell them apart and it would be easier to market each individual turtle.I also found out that the Turtles were a love letter to Jack Kirby and Frank Miller. At that time in my life I wasn’t aware of the impact Kirby had made on comics so in a weird way I suppose I have the Ninja Turtles to thank for getting me into Kirby.

As the years went by the Turtles started to fade from Pop Cultures spotlight and every now and then I would see them on reruns or remakes on television or I would see these horrible looking newer versions of action figures and this made me miss the Turtles of my era even more. I even tried filling my Ninja Turtle void by looking for comics that had the same magic as those early graphic novels I found when I was a kid.

Sometime last year around the time DC launched The New 52, the San Diego based publisher, IDW launched their new Turtle comics. Which I highly recommend reading. I was telling myself I wish that  someone would make a great turtles cartoon again and it finally happened! Turtle Power was back with everything I could’ve ever asked for and more thanks to Nickelodeon and their new Teenage Mutant Ninja Turtles cartoon.

The show has only had three episodes at this time with a new one every Saturday.The first episode is maybe my favorite one so far as the Turtles go out into the real world for the first time. It is smart, funny and everything that you would hope that a Turtle’s show would be.The first season looks to tell all the origin story and has some great moments already!A perfect example from early in the first episode we get to see Michelangelo eat pizza for the first time. What’s amazing is that we get to see what his taste buds feel like. He then tells the rest of the guys what a slice of pizza taste like…classic Turtles fun! 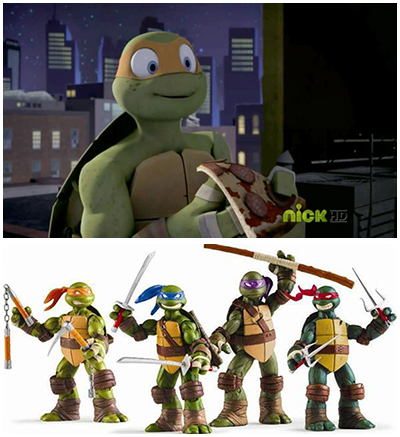 The show really is amazing It has 3-D animation and switches back-and-forth between traditional animation that almost looks like something that Gabriel Bá and Fábio Moon would draw. So far we’ve been hinted at Splinter and Shredder’s history but so far we have not seen them clash with The Foot Clan. I have a feeling that the first meeting between them will be during the season finale, which is great because it just got picked up for season two!

The cast is full of recognizable voices such as Leonardo voiced by Jason Biggs from American Pie and for all you Lord of The Ring’s and Goonies fans out there Sean Austin does the voice of Raphael. They don’t stop there though because in the last episode they meet a cranky old man voiced by Lewis Black who then turns into a giant mutant spider…so chances are we will see him again.

Also Krang has been re introduced and they make me think of the battle droids in the Star Wars prequels. Krang is now the alien races name and the brain like race are housed inside of human like androids.This is definitely a different version of the Ninja Turtles that I grew up with, but you know what it still has that funny, comic humor to it and it still has all the personalities that we’re used to.Trust me you still don’t want to get Raphael mad!I never thought I would say this but it’s a smarter more up-to-date version of everything I love about our favorite pizza eating Ninja Turtles.

Remember how I was talking earlier about the TMNT toys that made such a huge impact on my life?Well guess what, the past couple of weeks I’ve currently purchased the new versions of Donatello and Leonardo and I’m still looking for Michelangelo and Rafael and I have to say these are some of the best TMNT toys out there.Lego and Nickelodeon officially unveiled a new theme for 2013: Teenage Mutant Ninja Turtles at New York Comic Con 2012.

My name is Simon Daoudi I’m 34 years old and I love the Teenage Mutant Ninja Turtles! So If you were ever a fan of this property I highly, highly recommend you and your loved ones and your pets, especially if they are Turtles, sit down or even set your DVR and watch this amazing, butt kicking new cartoon from Nickalodeon because Turtle Power is truly back every Saturday mornings and it’s like it never left!