Cosplay Girl of the Month: December 2012

One of the features we do here at Comic Impact is the cosplay girl (NO anime, manga, role-playing games just comics) of the month, that’s right hot girls dressing up like your favorite super- hero characters. This month we’re privileged to have Jessica LG as the Cosplay Girl of the Month. 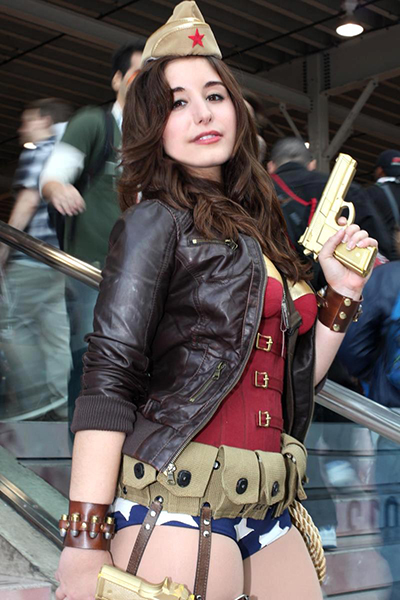 1-What is your name?
Jessica LG

3-Do you read comics and if so, what are your favorite titles?
Yes! (Although, I’ll confess, I haven’t picked up my pull in the last 2 months. Shame on me.) As of right now, new 52 Batman, Before Watchmen series, Hawkeye, Age of Apocalypse and my friend got me into new 52 Wonder Woman which changed my life! I picked up my first comic book series in 1999 and it was Young Justice.

4-What is your favorite comic book character?
Hawkgirl. She’s so badass.

5-Who are your favorite artists or writers?
Bruce Timm will always hold a special place in my heart because if it wasn’t for his Batman Animated Series, I would have never started drawing or reading comics. Also I LOVE curvy ladies so Frank Frazetta, Arthur Suydam and Frank Cho are godly. There are too many favorites to name here but, if you know I’m at a convention, you’ll most likely find me in Artist’s Alley 😉

6-What got you into cosplay?
I studied set design in undergrad and worked with props too. My college boyfriend got me into armor making. I love working with leather. We used to make costumes and props just for fun all the time; Vikings, medieval, futuristic, whatever we were in the mood for. I had a friend from college, Cindy Settje, help make me a movie replica Silk Spectre costume in 2009 and her awesome costume opened up the floodgates into an addiction I just can’t quit.

7-If you do more than one character which one is your favorite, and if you do only one do you have some ideas for more costumes?
Right now my favorite costume is my WWII Wonder Woman because it was a completely original concept. It was so well received that I decided all of my costumes in the future would be original concepts of existing characters. But, I’m working on an amazing Hawk Girl concept no one has ever seen that might take the prize for my favorite soon.

8-How long does it take for you to make a costume?
Depending on the detail, around 1-2 months. My next Hawkgirl costume will take 5 months total because the level of detail is extreme.

9-Have you met any of the artists or writers where your costume is based on their work?
I haven’t, but when I wore my WWII Wonder Woman to NYCC this year, George Perez signed my costume, which was out of this world! 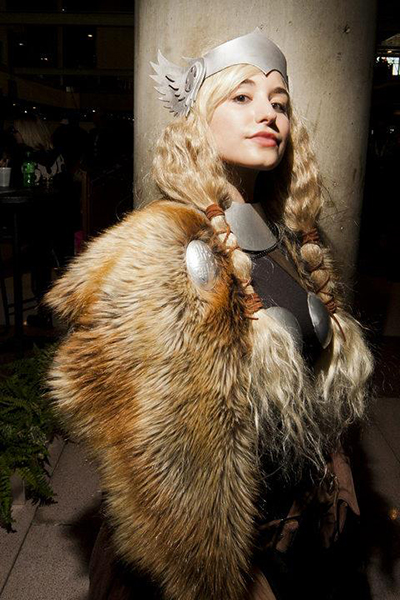 10-Do you buy any toys, busts and etc. based on some of your favorite costumes?
I stopped buying toys and statues in college, now I just buy art; And lot’s of it! A majority of my convention budget goes to buying custom commissions from artists I want to support.

11-So do people know you dress up like a comic book hero on your free time?
My friends definitely do. My family does (even though they don’t understand it.) I tried hiding it from my coworkers but word got around within the first month because it’s on my website. It’s kind of embarrassing when you tell people who aren’t immersed in geek culture that you dress up in costume. They usually give you a confused face like, “but…it’s not Halloween?…”

12-What is the funniest thing that has happened to you at a convention?
I guess it wasn’t actually at a convention but on my way there. I was dressed up like Black Cat for Florida Supercon in June. As I was leaving my house dressed from head to toe in black leather boderlining a dominatrix, my brand new neighbors were on their way out too. The face of shock from the mother and grandmother as they tried to hide the eyes of their 2 toddlers was priceless. Also riding the New York subway in costume 3 days in a row was a pretty funny experience. Every one stares at you, but no one wants to look at you in the eyes. I was trying my best to catch some eye contact and make some people feel awkward.

13-Do kids come up to you and think you are the real life character?
Yes! This just happened at NYCC. I dressed up as Elastigirl from The Incredibles on the days kids got in free. A lot of kids were coming up to me for pictures. Most of the parents had no clue who I was and kept asking. On the subway in NY this little girl actually recognized that I was Wonder Woman even though it was my WWII costume. Her father brought her up to me to say hello.

14-What do you like to do when you’re not costuming, such as other hobbies?
Drawing!! Or I’ll read comics. I’ll also watch old or rare movies.