Cosplay Girl of the Month: February 2013

One of the features we do here at Comic Impact is the cosplay girl (NO anime, manga, role-playing games just comics) of the month, that’s right hot girls dressing up like your favorite super- hero characters. This month we’re privileged to have Abby Dark-Star as the Cosplay Girl of the Month. 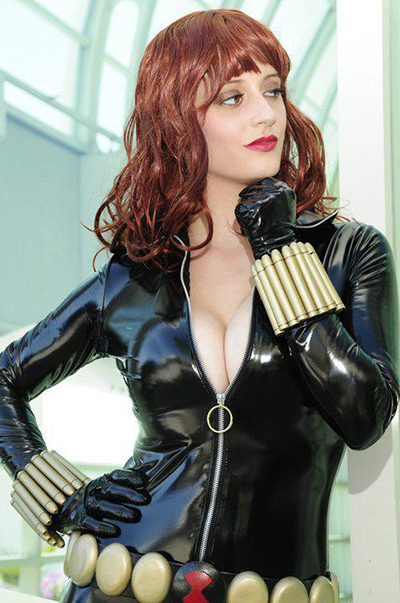 1-What is your name?
Abby Dark-Star

2-How old are you?
I am old enough to know better, but strangely don’t 😉

3-Do you read comics and if so, what are your favorite titles?
Of course! I’m rather behind at the moment (as often happens due to the convention/school season). My favorite titles are Batman, Invincible Iron Man,Walking Dead, Catwoman, Birds of Prey, Tarot, Witchblade…among others. I just started reading the Dredd books, too!

4-What is your favorite comic book character?
Poison Ivy, hands down. She was always a favorite of mine. I like the fact that though she is known for her sexuality, it is her brains that actually make her dangerous. She isn’t just a hot,sexy lady; she’s a hot sexy lady with BRAINS!

5-Who are your favourite artists or writers?
In order to keep it simple, I’ll stick with my favorite comic writers and artists. Those would be: Adam Hughes, Neil Gaiman, Paul Dini, Bruce Timm, Mark Silvestri, Jim Lee, Frank Cho, Mark
Brooks, and the list goes on and on!

6-What got you into cosplay?
I have to lay the ‘blame’ solely on the feet of my Dad. My father for a large portion of my life, was a stay-at-home Dad. My favorite memories are of me coming home from school in order to watch cartoons, or Saturday morning curled up on the couch watching Dr. Who, Star Wars, Battlestar…etc. He inspired in me a great love of sci-fi and comics. I also happened to have a flair for the dramatic, so all through my school years and into college, I was in theater.Theater took up a lot of my time, and I realized that even though I loved it, I wasn’t planning on making a career out of it. I still needed a creative outlet, and around that time I went to my first convention. I saw people in costume and instantly knew I wanted to make one and be a part of
the community.

7-If you do more than one character which one is your favorite, and if you do only one do you have some ideas for more costumes?
Poison Ivy is, and will always be my favorite costume/character. The fact that she has been drawn so differently over the years allows me to have some flexibility to create different costumes and incarnations of the character. I’m constantly inspired by art that I see to make a new Ivy costume!

8-How long does it take for you to make a costume?
That really depends on the costume. With my classic Ivy (the leaf bodice) that can take about a week or less, but that is because I’ve done tons of trial and error on the costume and know how to put it together. With something like Satele Shan, it was consistently going back to the drawing board, staring at the art, trying out something and then getting it to work. That costume had several different mediums that I (and Zen) hadn’t worked with yet. So it took almost a year, and we’re still tweaking it for accuracy as we speak.

I’ve found what determines length of construction is the costume itself. If it is intricate and has lots of details, that prolongs the research and materials gathering phase. You have to figure out how you are going to move, how you are going to move without breaking pieces and how to make the pieces look realistic. You also have to think about comfort and maneuverability. Then there is the construction phase which can be just a process of trial and error, and redo after redo. Then there are test fittings and tweaking. Even after completion, there can be realization that some things just won’t work and you go back to redo pieces.

9-Have you met any of the artists or writers where your costume is based on their work?
I have had the pleasure of meeting several artists who I had made costumes based on their art. In 2011 at SDCC I was in Arkham Asylum Poison Ivy and was looking at figures in the displays. I turned to walk away and was suddenly surrounded by these gentlemen just staring me up and down. I kind of smiled, unsure, and greeted them. It was some of the development team that ha worked on the game. They loved the costume and the details that went into it. Something similar happened again at SDCC 2012 when I wore Satele Shan. I got to meet some of the concept artists on the game, and the artist who had done the 3D render of the actress who played Satele in the trailer. Having that type of positive feedback is extremely humbling and makes me really happy! Hearing “that’s what we envisioned” from the people that created the artwork to me is the ultimate compliment because without them this hobby would not be possible! 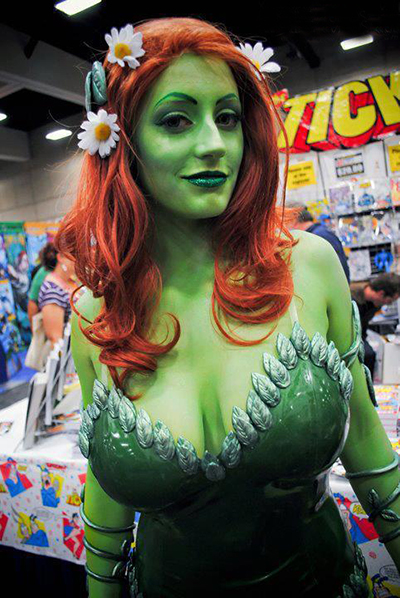 10-Do you buy any toys, busts and etc. based on some of your favorite costumes?
Often I buy too many! I love the great figures/busts/statues that come out. Sideshow, Kotobukiya and Hot Toys are among my ultimate favorite companies because their work is detailed and the
figures gorgeous!

11-So do people know you dress up like a comic book hero on your free time?
It’s hard to keep it a secret when you love it as much as I do. I’m often bursting to share new techniques or pictures of the costumes. My boss often makes fun of me when I bring my sewing machine to work during con season, “working on a deadline, Abby?”

12-What is the funniest thing that has happened to you at a convention?
There is so much joy at conventions that I’m always laughing. I think one of the funniest things that I about died laughing over was at this past San Diego Comic Con, I was wandering around in costume and I see this little boy, about 3, on a kid leash. His mom was dressed as a zombie hunter with a bat. The little boy was a zombie. Full makeup, looked awesome. I asked his mom for a picture and she grinned. “Sure, John-ATTACK!” and he lunges against the leash, snarling, clawing trying to get to me. It was one of the most AWESOME experiences and I could not stop
laughing or smiling!

13-Do kids come up to you and think you are the real life character?
Often, and it is really important to me to give them time to talk, to listen to them and answer their questions. For me, kids are the best part of costuming at conventions because they just enjoy it. It isn’t about accuracy, or what I’m wearing, it’s the pure joy of their love for the character.

14-What do you like to do when you’re not costuming, such as other hobbies?
I horseback ride, read (a ton), and write. I also enjoy music and play the piano (still learning) as well as flute. I find that I’m also involved in a lot of projects surrounding the costuming hobby.I’m the Costume Moderator over at the Replica Prop Forum, an administrator on Sexy Star Wars Girls, and have a lot of other projects that I assist on.

15-Do you have a website or a MySpace? Does anyone actually have a MySpace anymore?
I don’t have a MySpace, but I should probably get one, just in case the masses turn back to it, haha! I have a website, http://www.keabtium.com, but it is still in development. To keep up with my activities I would say facebook is the best option, http://www.facebook.com/abbydarkstar or twitter, @abbydarkstar! I love hearing from people and interacting, so please,
stop by and say hi! 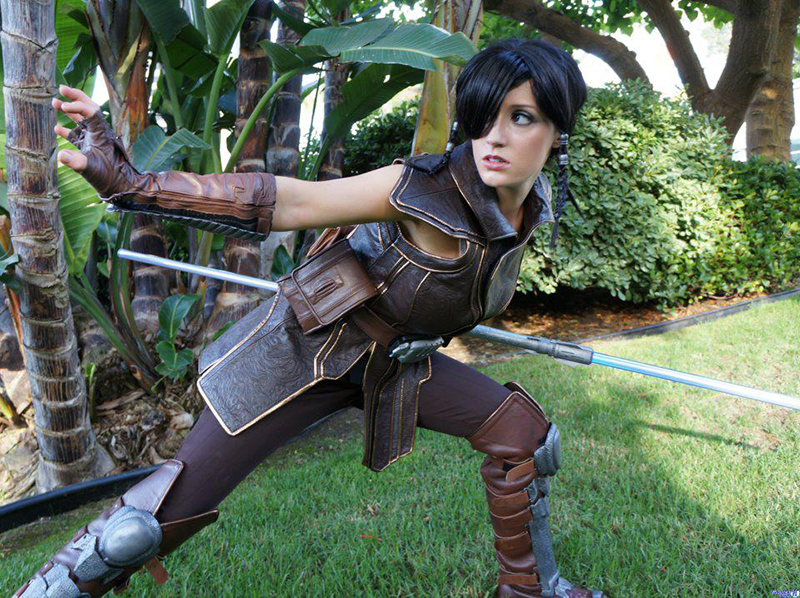