Hey Comic Impact! Sorry for the delay this week. I had gotten my comics read pretty fast last week but didn’t have time to write up anything about them because I spent the weekend visiting friends and family back in New York. I’m still a little tired but wanted to get this out to you guys as soon as I could. I’m not going to go into too much detail this week but make sure to listen to the Pick of the Week Podcast this week as Simon, Sheldon, and I go more in depth on last week’s comics. 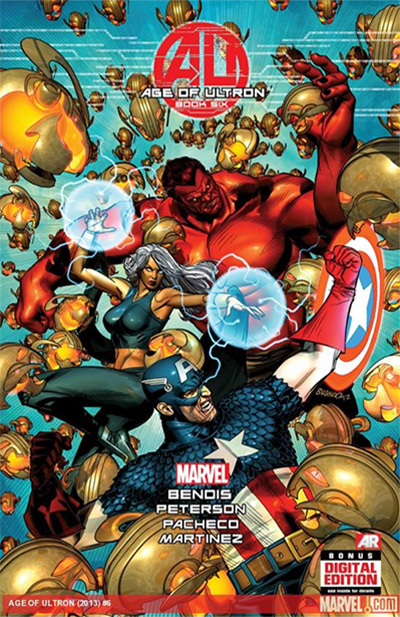 Age of Ultron #6 by Brian Michael Bendis, Brandon Peterson, Carlos Pacheco, and Roger Martinez [Marvel]
Well holy shit! What happens in this issue is huge and I wasn’t expecting it to happen as soon as it did. Maybe that’s why it was so shocking. After the last page of issue 5 when Wolverine makes his statement about what he’s going to do and then in the next issue we follow him in his journey and he does what he said he was going to do. Holy crap! I really didn’t expect and it was a great shock that I think provides another fantastic twist in the very interesting story of what Bendis and team are doing here. I’ve said this before and I’ll say it again, keeping things mysterious and without giving the jaded internet comic book reader a look into the future after the event is a good thing because then we get genuinely shocking moments like the one in this issue.

I haven’t been online much after this issue was released but I have to say that besides what happens in the Wolverine story we can’t forget about Nick Fury’s team going to the future, what happens to them now? Another question, did anyone see Captain America’s head go flying off in a panel? What the fuck! I’ll probably be repeating myself a lot more as we come to the close of this series but I’ve been enjoying the hell out of it and I’m looking forward to the very secret Marvel Universe changing conclusion.

2.Revival #9 by Tim Seeley and Mike Norton [Image]
When it comes to this comic I’ve always mentioned the religious factor that comes from being denied death. It’s an interesting concept. The other thing about this comic is that at its core, it’s a mystery book. Now there are a lot of mysteries going on this book, some in the forefront, some in the background, and some that have been there since the first issue but certain issues are being kept from coming to the surface, which to me is fine as long as the payoff is satisfying. But the really excellent part of this comic book is the characters. They are well written and developed and not over the top caricatures. They are down to earth people that have regular problems despite this horrific thing happening around them. The main character, Dana Cypress, has a lot on her plate. She’s a cop having to deal with this revival phenomenon, her ex-husband, her son, her father’s the sheriff, and she also has to solve her sister’s murder, who isn’t any help because she can’t remember who killed her. Her sister is a reviver and she’s the only one who knows. My favorite parts of this issue were the scenes between the sisters. Besides the given situation of the comic the way they talked to each other about everything felt real. The conversations about what child parents like more and the stubbornness and anger towards each other as siblings and where they fall. If you’re an older brother/sister you know where Dana is coming from and you identify with her frustrations as well as know how the younger child feels when you try to help them and they think of you as another parent. This is why I enjoy this comic, because it’s real and it has awesome cliffhangers, and this issue was great. 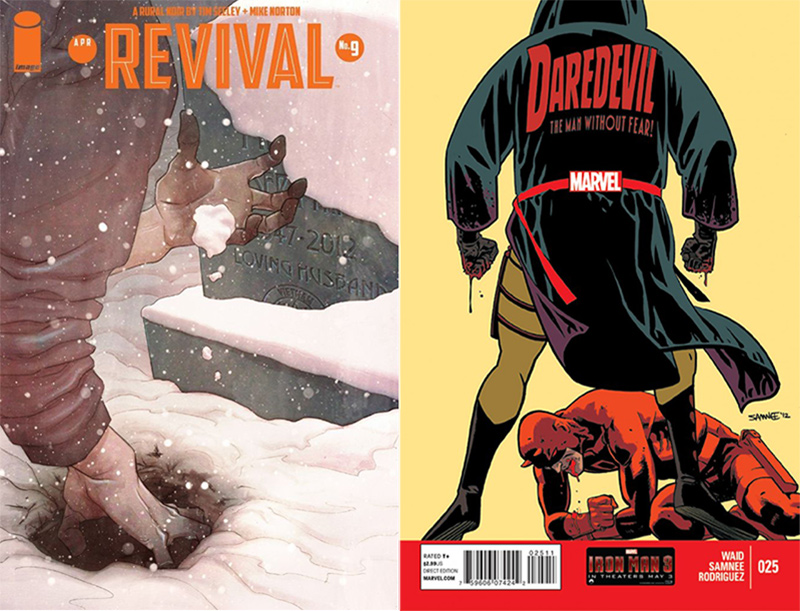 3.Daredevil #25 by Mark Waid, Chris Samnee, and Javier Rodriguez [Marvel]
This issue was a brutal battle between Daredevil and a new opponent. Daredevil has met his match and his match is not only someone like him, but his better in every way. This is the continuing story of someone messing with Daredevil. It’s taxing, emotional, personal, and downright torturous. I’ve already explained a theory I had about who the person behind it all is but I don’t see any evidence to support that this week. All I know is that bad things are going to happen to the person when Matt finds out. Other then the brutal fight where Matt gets his butt handed to him I have to say that I loved the design on the costume on the bad guy. He’s dressed like Daredevil from his first appearance but keeps the look of a ninja (ninja to me points to the Hand) and it serves as an added insult in some weird demented way at Matt, though it’s kind of a moot point seeing as he, well, can’t see. But next month is a double sized finale to this whole crazy arc and I can’t wait to read it.

4.The Superior Spider-Man #8 by Dan Slott, Humberto Ramos, Victor Olazaba, and Edgar Delgado [Marvel]
Though the answers to the Doc Spider-Man acting weird where resolved pretty nicely when it came to appeasing the Avengers I don’t think that’s the most important thing from this issue so I’m only going to touch upon it for a few sentences. I had a feeling things were going to shake down like this, it wasn’t going to happen any other way but I’m glad that at least they had past events as a reason for his actions and I liked Spider-Man’s scene with Black Widow. It was a nice scene where we were reminded of Silver Sable’s sacrifice and how it affected Spider-Man.

What we do need to talk about is the fact that Doc Spider-Man has finally realized that there are traces of the real Peter Parker left in him and has decided to EXTERMINATE! Blue Spidey. As much as Carly knew that something was up, and I’m glad they touched upon that plot thread this issue, I’m wondering how they’re going to get around this in the next issue, if at all. Slott has proven that he’s not going to make things easy for Blue Peter to come back so those last few pages are very interesting going forward and the next few issues should show us how blue the future really is going to be for Peter Parker. 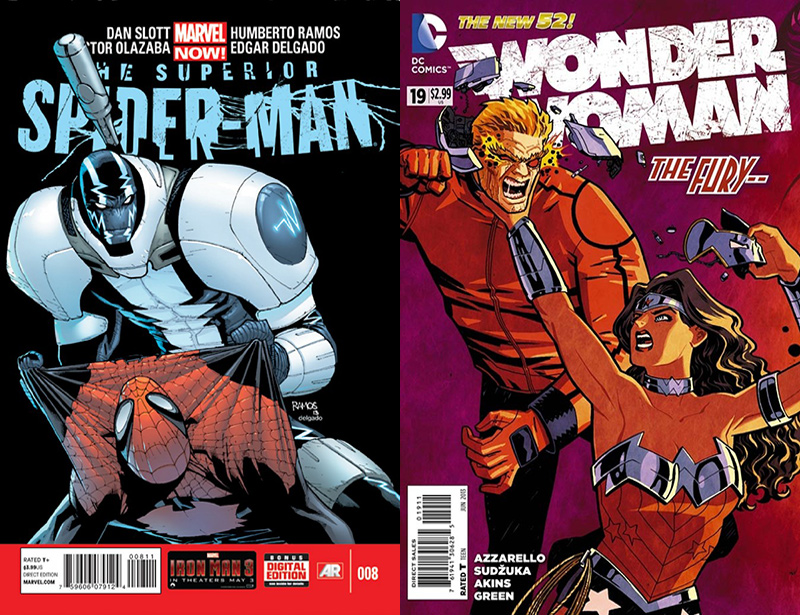 5.Wonder Woman #19 by Brian Azzarello, Goran Audzuka, Tony Akins, and Dan Green [DC]
I had assumed with the ending of the last issue the stuff with Zola’s baby would be over with or at least taking a back seat for awhile so that Wonder Woman could have different adventures but we all know what they say about assuming. Also, someone should smack me, whose name is on the coverThat’s right, this is an ongoing written by someone who has a plan and will take his time getting to that story. Now yes, the baby stuff is continuing but I wanted to point out that I have nothing bad to say about this comic. I still find it very interesting and I really enjoy it and it wasn’t until I watched this week’s Game of Thrones that I was reminded of this comic and how much it resembles the show, in ideas at least when it comes to the secrecy and scheming and planning. The cast of characters is long and they all have plans for the throne of Zeus, there’s hierarchy changes, and allegiance changes, and characters trying to stay true to themselves, along with magic and prophecies, and different kings and realms. They are very similar and I find myself enjoying this comic for the same reasons I enjoy Game of Thrones. So if there’s anyone in your life that loves Game of Thrones and they don’t read Wonder Woman, hand them these comics.