Hey Comic Impact! This is going to be another short review week. I’ve returned from Heroes Con in Charlotte and if you want to listen to my trip check out the latest episode of The Impact, but because of the con I’m a little tired so you’ll just have to listen to Pick of the Week if you want more comic book talk. 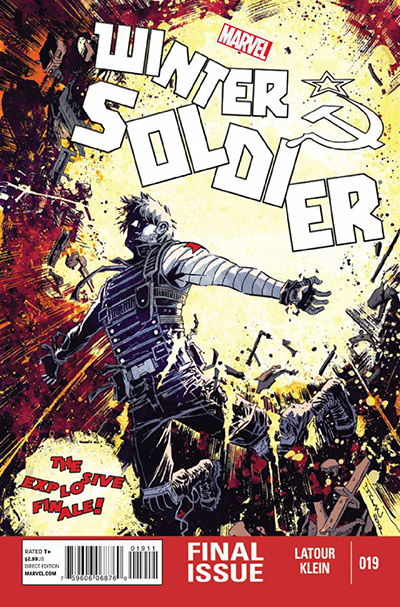 This is the last issue of Jason Latour’s and Nic Klein’s Winter Soldier and this makes me sad. It makes me sad because I really loved this series. I bought this because of Brubaker but stayed with the series for my love of the character and because of how much I enjoyed the first issue by this creative team.

I’ve been a huge fan of this series and when Latour and Klein took over I was very excited because I loved that first issue they did together. I loved it so much that their entire run ended up being on the Top 5 every month. I don’t know how much I’ve written about this book in the last few months. Every issue I saw something different that made it stand out.

Latour’s story was personal and heartbreaking, especially coming off of the end of the Brubaker run. There was something always new to look at when it came to Klein’s art. It was beautiful and rendered so well. I love the different styles used for flashbacks, I liked what the colors represented and I liked that it made the book stand out. Joe Caramagna’s lettering was absolutely some of the best I’ve ever seen in a Marvel comic. He really got to flex his artist muscle in a way I haven’t seen. Everything about this comic was fantastic.

I’m not going to talk much about the story in this finale issue, instead I will plead to the fans that left after Brubaker left, to seek these issues out or at least buy the trade when it comes out because you’ll be getting a very special story with this character. I’m pretty sure this isn’t the last that we’ve seen of The Winter Soldier and because he’s part of the Captain America movie that’s coming out next year, we’ll see him sooner rather than later. All I’ll say is a huge thank you to the creative team for a wonderful book. With these 5 issues you’ve made a fan out of me for life and I’ll be following your careers wherever they go, so thanks.

I remember a few months ago talking about this comic and asking like a billion questions. We’re at the last issue and I still have all those questions and then some to be answered. I’ve been enjoying the hell out of this mini-series which I’ve talked about, at length, on the Pick of the Week podcast. I’m not going to dwell too much on what happened in this issue but I will say that the coming ramifications are going to be insane. There is so much that we still don’t know going into the final issue, and that makes me very excited.

The big thing that I want to bring up about this issue is what happens between the two Wolverines. Time paradoxes, that I don’t want to think about or talk about because it’s too much to comprehend and get your mind around, make it so that one of these Wolverines has to die. Something about physics and two objects not being able to occupy the same same, science, science, math, and theoretical physics. Anyway, Wolverine has to kill his other self, and he does. Now I think this is fucking major. As I read it, I was like, WTF!!!! To me that’s huge. We’ve always heard that Wolverine can regenerate from a drop of blood but never has it been known that Wolverine knows how to die and how much it adds to his character. It’s a huge development! It has been brought to my attention that this could be a trap or a different plan that he has as we didn’t see a body, but I don’t know. To me it didn’t feel like that. I feel Bendis thought this scene was a big deal already and didn’t want it to be gratuitous.

This series has heavily focused on Wolverine and we know that he’s going to be affected by his time traveling in a huge way. We’ve already seen hints of it in Wolverine and the X-Men. Two more weeks until the final issue and I don’t know what to expect, and that’s fucking awesome. 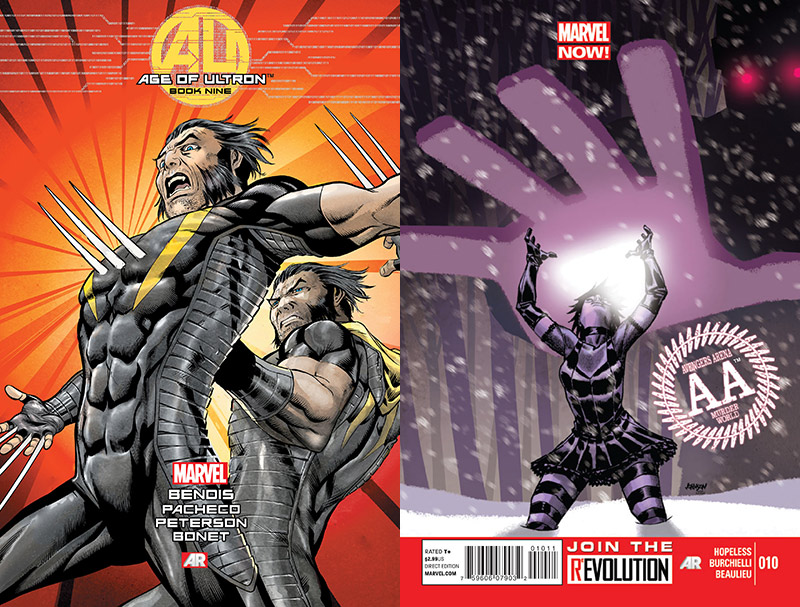 Ok, so this issue has the death of a major character. There has been a lot of rage and unhappiness on the internet, so much so that for me the issue was spoiled the night before it came out, mostly tumblr. Since the start, this series has been under controversy. Questions such as, how can Marvel do a comic book that is just about killing off lesser known characters? To, FUCK THIS SHIT! Which isn’t really a question and more of a statement. Though I’m sure those people who were vehemently against the book still buy it and read it so they can complain on the internet. I’m going to spoil the death in this issue so stop reading now.

One of my favorite comics of all time is The Runaways. I’m not just saying this, it’s true. When I first started reading comics there were 3 names that kept me coming back to the world of comic books. Those names were Brian Bendis, Mark Millar, and Brian K. Vaughan. They got me to stick around and in some way I vowed to always buy any book with their name on it. So naturally when Runaways launched, I bought it and fell in love with it, not only because of the concept but also because it was a #1 and I didn’t have to know so much Marvel continuity stuff to read it, this was brand new! I fell in love with the characters and they mean a lot to me. So when I heard about the death of Nico Minoru in this issue I wasn’t angry or upset, I wasn’t happy either, I just was.

I’ve been a defender of this comic since the start. I’ve always said that there’s something else going on in this comic and I still believe that. I really don’t think that Marvel would willingly kill off so many characters in a comic book just like that. I still believe that there’s a bigger story being told here and we haven’t discovered what that is yet. Comic books are a monthly, episodic journey. You’re only seeing what the writer and the artist want you to see. And right now, they don’t want us to see the bigger picture. I’m not telling you how to feel about the death. We all know how death in comics go, but at the same time I think this book is suppose to be giving you all the feels on purpose. If it doesn’t get such a reaction out of you then it’s not doing it’s job. I didn’t react with rage because I’ve always felt that death is not the point of this book. If you want to stop buying the book I totally get it but at least give it to the end of the series to see what this comic is all about. I do think some people over reacted but at the same time they are allowed to feel however they want. They want to drop the book, that’s their choice, but if they do they won’t be getting the whole story. I’m still enjoying this comic and if Nico is truly dead, well, I’m glad she went out a hero, fighting to her last breath. 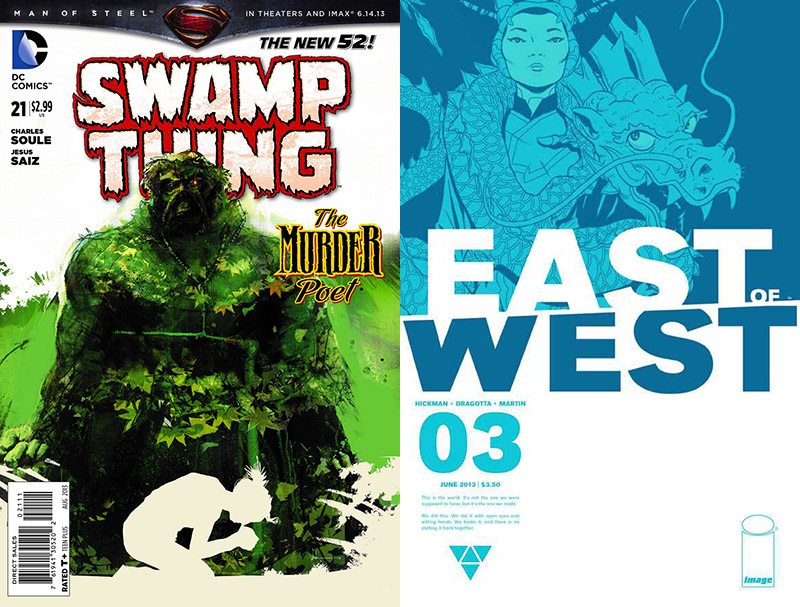 I love this comic and this new creative team. Charles Soule is doing a fantastic job adding to the history of the Swamp Thing characters without it feeling like it’s forced. This issue sees the current Swamp Thing have to decide whether or not he’s going to keep the promise to a woman that was sworn by a past Swamp Thing, which leads to them heading to The Whiskey Tree in the next issue.

I don’t know if Jesus Saiz is just a guest artist or if he’ll be sticking around on the title for awhile, I hope he’s around for the long haul because he killed this issue. It’s beautiful, I love the way he draws Swamp Thing, especially when he was drawing him as he was growing back his head after it was shot off. One of my favorite things from this series is how much leeway is given to the artist to go crazy and design some really cool pages out of the trees and leaves and plantation. This book is creative in both aspects of writing and art, and I include the coloring and lettering as well, in this issue. Everything is done carefully and with purpose, and that’s what I like to see in comics, an amazingly put together project.

Remember last month when I said that this comic is badass and that the main character was a badass and that this comic is filled with bad ass moments? That’s still the case with this issue. You all know how much I love this book. I’ve loved it since the start and reading this issue I was very surprised by how fast things are moving. I wasn’t expecting that but I’m glad that we’re going this way. I feel that if Death gets his wife back then to me there’s going to be more going on with the book that we might not be expecting and that makes for a better read.