Hey Comic Impact! Top 5 for the week from New York!!! 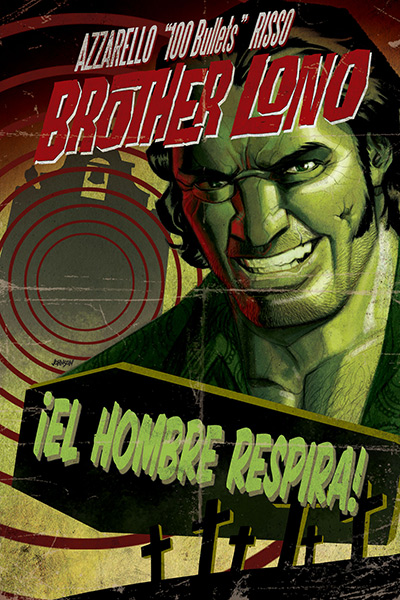 I love 100 Bullets. It’s one of my favorite comics of all time and I consider it one of, if not, the best collaboration between a creative team in comics. So much so that I wrote about 100 Bullets on my blog way before I joined Comic Impact. So a while back when this Brother Lono series was announced you could say that I was pretty excited. To be honest, I was never expecting anything else from that universe to be created or talked about. I would hope that the team would untie to tell another story, something different, which they did in Spaceman from Veritgo last year, check that book out, it’s fantastic. I also hoped that they would unite and do other things in comics but again, I never expected to see any of the 100 Bullet characters again, especially Lono, who was one of the meanest, toughest, sons of bitches who was ever created. Lono is not a sympathetic character at all. Throughout the 100 Bullets series he fucked, killed, raped, and destroyed anything and everything in his path so to come back to that universe and tell a story with him at the center of it was a bold choice by the team.

The comic itself brings back the entire 100 Bullets team, writer, artist, colorist, letterer, and cover artist. Though the comic is called Brother Lono, the first issue spends more time setting up the place and the major players in this series and less time with Lono. I don’t know why anyone who hasn’t read 100 Bullets before would buy this comic, but if you did, go read 100 Bullets first because you’ll need to read that, not for back story for this comic but for back story for Lono the character. This Lono is very different from what we got in 100 Bullets and I’m looking forward to see how he’s changed, why he’s changed, and who changed him and if he’s going to go back to being the brute of the man he was. From the first 2 pages we know that Lono thought he was suppose to die but he got a reprieve, could this be the event that changed his life? It’s possible, but he was always near death or at least in the presence of it that I don’t buy it. Also, I’m not entirely convinced that those first 2 pages take place before the story we get in this comic, it could totally take place after, I’ll just have to wait and see. But like I said, this Lono is not the same man, he’s reserved, less quick to anger, and he knows his place and doesn’t fight orders.

Like I said, I’m hooked into the story and to find out the changes for this character.

I just want to add a few more things before I move on. First of all this book is not for the faint at heart, it’s fucking bloody and violent, just as I expected it to be. I’ve been reading Wonder Woman by Brian Azzarello but I’ve missed him being able to go all out in his writing and having read 100 Bullets it’s nice to see him in that world again. But to me the real star of this book is Eduardo Risso because he is truly one of the masters of the art form. He brings this book to life, and I don’t mean in the sense of making the art and story pop but in a way that would make directors like Tarantino or Scorsese jealous in the way he lays out scenes on the paper. You just read this issue or anything he’s ever done to know what I am talking about. I’ve mentioned 100 Bullets a lot in this review and I can’t help it because 100 Bullets is a grand opus from this creative team, but if you’re coming back to this book because you think you’ll be getting a new 100 Bullets story, I’d say think again but I’d also say that stick around, your faith as a reader will not be disappointed, after all this is Azzarello and Risso, back together, working on Lono, what more could you really want?

This is the end of what I consider to be one of the best Marvel Crossovers since House of M. I don’t feel like I need to explain myself further than that, but unless you haven’t been following this column for the last half year you know that you’ve seen Age of Ultron up here at least a few times in the last 3 months.

There are going to be some huge ramifications coming out of this series that we’re going to see felt throughout the entire Marvel Universe, and I know that a lot of these crossover events seem to tout that horn every time they’re released I actually believe this one. The biggest one is the Angela thing, but I know nothing about the character so I’m not even going to touch this one. But other things that are going to be spinning out of this are going to be insane. First of all we have all this fall out with Wolverine to deal with, he’s time travel was the straw that broke the camel’s back and he’s pretty much fucked things up on a multiple universe scale. And we see some of those factors brought to light. I kind of don’t want to spoil things here as I’m sure you’ll find that all out in the aftermath and I don’t want to take surprising events from the book and ruin them for you here, but I’m excited and look forward to seeing how a lot of these issues play out.

I’ve seen people online say that the ending was underwhelming and I can’t agree with that because of all the stuff that’s already happening or will be happening. Yes, Marvel made an event where if you want to see some things pay off you’ll have to buy a new comic, but that’s your decision, no one is forcing you to buy anything, but I feel the story told an event level story filled with excitement and a call back to a past issue of Avengers that I wasn’t expecting to see. It was fun and there’s more fun still to be had. 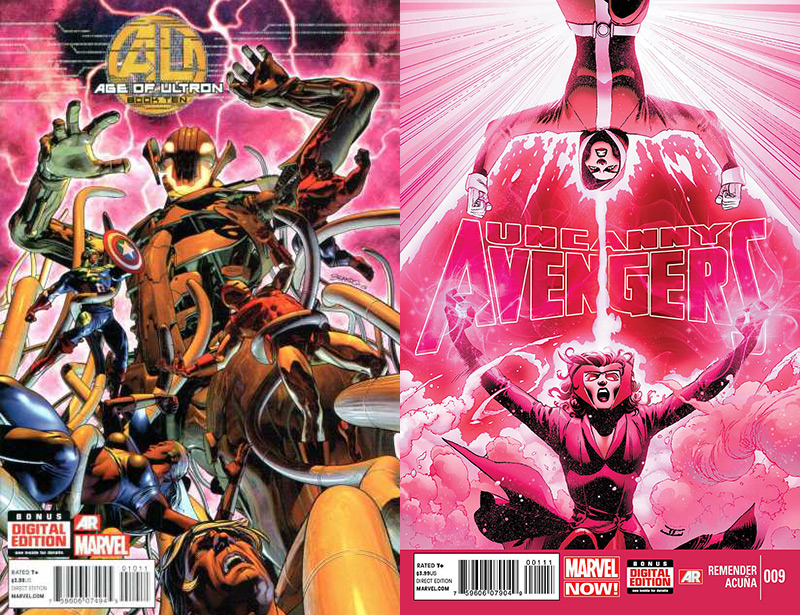 This comic is one I look forward to reading very much every time it comes out and it’s not for the reasons you might thing. My appreciation for Acuna’s art has grown a lot over the last few years. He wasn’t always my favorite but so far on this book he’s proven himself with being able to handle the job and turning in beautiful work, so much so that I can’t even remember why I didn’t enjoy his work to begin with. But the real star for me here is the writing, not just with how Remender is build from his work on Uncanny X-Force but also the ideas that exist in this Marvel Universe surrounding super heroes and mutants. He deals with questions I’ve always had myself but have never seen raised or asked in these comics before.

The big question for me was uttered by a comment The Wasp made when saying she didn’t understand why people thought mutants are thought off as worse or menaces and people like her or the Fantastic Four or even Spider-Man aren’t held in the same light. Essentially saying that The Thing not only looks different but has power as opposed to Rogue who looks normal and is a mutant but Rogue is more hated by people that The Thing. It’s something that always interested me, something that’s always swam around in the back of my head when thinking about the X-Men.

Then comes the discussion of Wolverine’s past with X-Force and him killing the kid apocalypse. I like that he didn’t pass off the blame to Fantomex and just took his yelling from Captain America but I also loved when Rogue stepped between them and said that she had no problem kicking Cap’s ass if she had to. But then Wasp condemns Wolverine but at the same time protects Thor when he wants to take blame for his actions clearing making this an X-Men/Avenger thing and not an overall team, making this book more interesting as a study on these characters and their principals mixed in with the super heroics. Oh yeah and the new 4 Horsemen of the Apocalypse have returned and they’re all familiar faces who will probably have a lot of revenge on their minds. 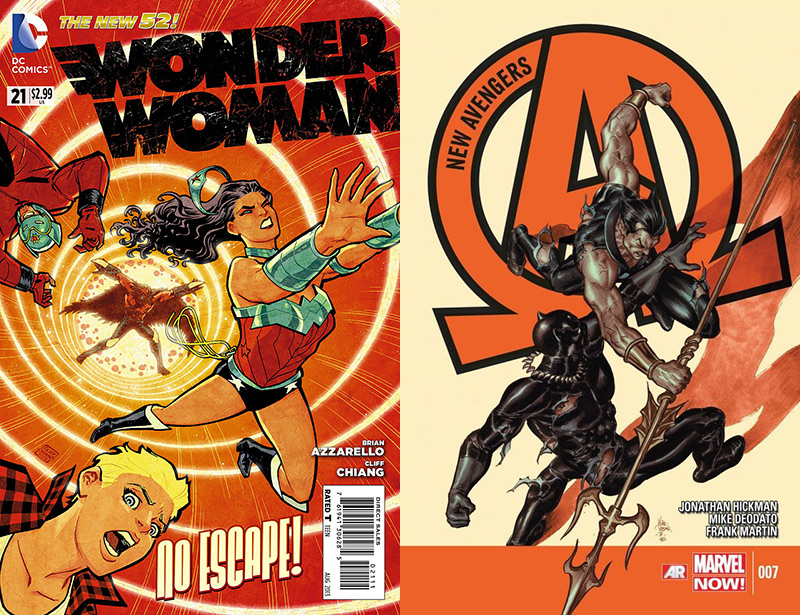 I’ll be honest; I don’t know much about that ending to this comic and what consequences it will bring. Just like I didn’t know what the Orion stuff was going to bring when that debuted but what I do know is that I’m excited about this comic. But despite the last page not making a whole lot of sense to me, I still thought this issue was fantastic. I enjoyed the fight scenes a lot and I’m looking forward to learning more about the New Gods and the Old Gods and how they’re going to exist together but also how all this stuff with the First Born is going to play out.

This issue is a quiet issue in the sense that it’s dealing with the emotional and scientific aftermath of the first story arc. One of the problems that was initially dropped during the first arc was between Namor and Black Panther. Namor, under the Phoenix power attacked and destroyed a large portion of Wakanda. At the beginning of the series Black Panther promised Namor that he would kill him, something that hasn’t happened yet but we were reminded of early in this issue. Panther and Namor talk and they both decide that going to war with each other would be a terrible thing but in the end it’s not their decision to make, a decision that will be made by the end of the issue. I love aftermath issues and this was a great one as we catch up with issues from the start of the series as well as a dinner date with Doom, his son, Reed Richards, and Steven Strange. There’s a lot happening here dealing with what’s come before and setting up stuff for what we’ll probably see during the upcoming Infinity crossover that Hickman is writing.