One of the features we do here at Comic Impact is the cosplay girl (NO anime, manga, role-playing games just comics) of the month, that’s right hot girls dressing up like your favorite super- hero characters. This month we’re privileged to have Harley Von Schweetz as the Cosplay Girl of the Month. 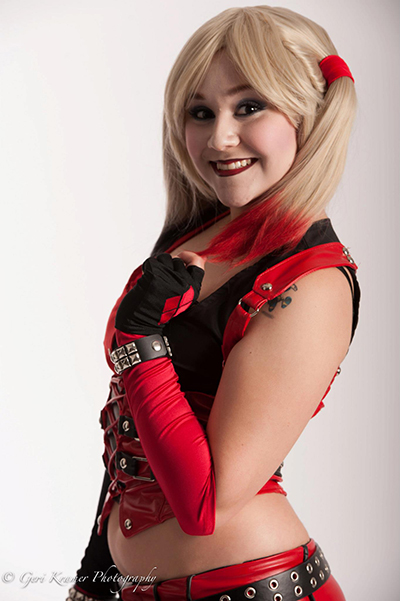 1-What is your name?
Harley Von Schweetz ^_^

3-Do you read comics and if so, what are your favorite titles?
Of course I do. I am pretty behind though due to the whole trying to graduate college thing. My favorite story of all time is Batman: Hush, I mean that story is just perfection I also love Identity Crisis and Gotham City Sirens, but if we are talking recent titles then I am definitely loving: Smallville, Deadpool, Suicide Squad, Batman Beyond Unlimited, Batman: Arkham Unhinged, Batman: Dark Knight, and Walking Dead.

4-What is your favorite comic book character?
Harley Quinn of course. I just love that zany gal. People forget how intelligent she really is because she is so blinded and wrapped up in her love for Mr. J, but who’s the one who was able to pull off capturing Batman while simultaneously staying adorable (in Mad Love)? Yep, Harley. Who couldn’t love her?

5-Who are your favorite artists or writers?
I’m going to keep this short and sweet. Jeph Loeb, Jim Lee, Paul Dini and Bruce Timm. <3 I also have to include J.K. Rowling, I know she doesn’t write comic books but she I one of my all time favorite writers and I am a super Harry Potter nerd haha.

6-What got you into cosplay?
My boyfriend/partner in crime gets credit for this. I have been acting since I was 4 so dressing up and taking on the role of someone else is something that comes naturally to me. I would dress up anytime I got the opportunity to do so (Halloween, theatre banquets/parties, my birthday parties…which to this day I still have themes for because it give me an excuse to dress up haha). Once I met him in college and we became friends he was like why the heck have you never gone to a convention? So he started taking me to every convention in our area and I was hooked.

7-If you do more than one character which one is your favorite, and if you only do one do you have some ideas for more costumes?
Harley Quinn is by far my favorite costume/character. I used to always say that my first costume, the Batman Animated Series Harley, was hands down my favorite (mainly because I don’t have to be in uncomfortable heels), but I really love my Arkham City costume. Although my feet kill me by the end of the day I still have so much fun in that costume. I am also constantly coming up with new Harley costumes, I will be debuting a new one on Star Wars day at SDCC…can anyone say slave Harley? I am also really trying to finish my steampunk Harley, which has been in the works for almost a year now, it just keeps getting put on the back burner for some reason. 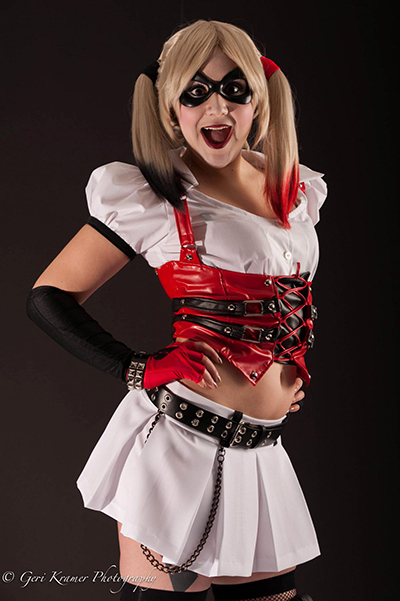 8-How long does it take for you to make a costume?
Ok I can’t lie here; my boyfriend’s mom gets the credit for almost all of my costumes. She is an absolutely amazing seamstress. She knocked out my Animated Series Harley in ONE DAY (amazing right?) My Arkham City costume definitely put up the biggest fight though and that costume took the most time, let’s just say she will never make leather pants again. I am also in the process of creating my Vanellope Von Schweetz costume (hence the ‘Von Schweetz’ part of my name) and this costume has been in the works since November. I am a stickler for accuracy so the wig (being made by the great Peachykiki) is what is taking some time, but I guarantee that when it finished it will be adorable! For a costume like my Harleypool, Animated series, or Arkham Asylum it takes up to a week at the very most. For my Arkham City, steampunk Harley, Vanellope, Marceline the Vampire Queen, and Ame-Comi Harley it can be in the works for a year; and this is mostly because of props, finding the exact right fabric, wigs, and going back to the drawing board and making tweaks and adjustments constantly.

9-Have you met any of the artists or writers where your costume is based on their work?
That is a negative, but I know that when it happens I am completely going to nerd out.

10-Do you buy any toys, busts and etc. based on some of your favorite costumes?
Guilty. Between my partner in crime and myself we have entirely too many awesome things to display.

12-What is the funniest thing that has happened to you at a convention?
How can I choose just one when there are so many amazing moments? One of my all time favorite moments, which was just adorably entertaining, was at SDCC when I was dressed up as Harley from the Animated Series. There were these two little boys, both under ten, with their mom. They were dressed as Batman and Robin and they came up to me in complete character and started “fighting” me. They were lecturing me on how what I was doing is wrong and if I were to leave Joker how much better off I would be. It was one of the cutest things ever and I had a hard time staying in character because these two little crime fighters were so dedicated to who they were and were really trying to convince me to change my ways and become a good guy. I think kids are the best cosplayers because they totally believe in who they are and what they are doing; they really know their stuff.

13-Do kids come up to you and think you are the real life character?
Oh yes, just like in the story above. I absolutely love when this happens because the kids are so honest. I have a four year old brother who is super into TMNT; he is Leo, I am Mikey, my other brother is Donnie, and my boyfriend is Raphael; and in my little brother’s world we are those characters and he knows the story lines and believes it. For kids it is real and it is so much fun to play along.

14-What do you like to do when you’re not costuming, such as other hobbies?
Most of my free time is spent with my Pomeranian Meeko. She is my baby so I love to play with her as much as possible. Disneyland is my second home; I can’t get enough Disney. I also love to read, catch up on movies that I’ve missed, and my most recent hobby is making phone charms. I have discovered that I have a love for making adorable things out of clay haha.

15-Do you have a website or a Facebook?
Facebook is definitely the best way to reach me and keep up with all of my fun adventures, https://www.facebook.com/HarleyVonSchweetz and I don’t have a twitter yet but I am thinking about finally getting in the loop haha. I absolutely love hearing from people and it’s so cool when I meet people through facebook and then they find me at conventions. Be sure to pop over to my page and say hi! ^_^ 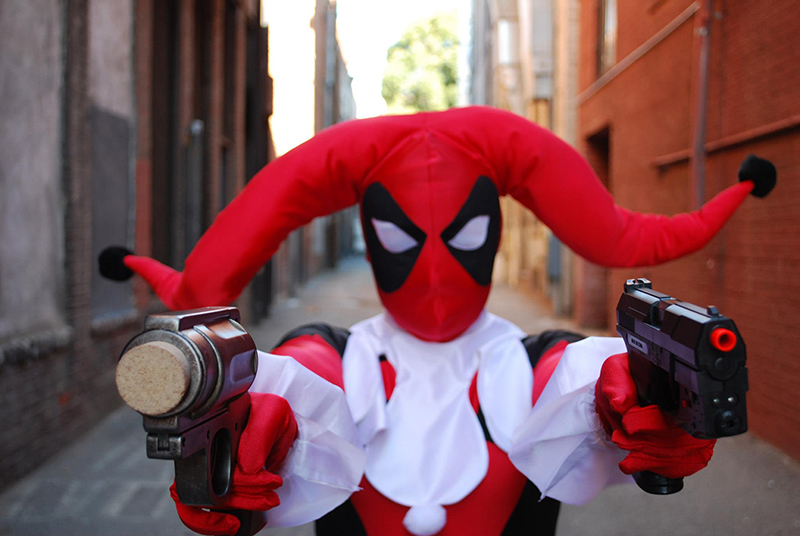