Hey Comic Impact! Sorry for the delay but I’ve been making my transition from North Carolina back to New York. I hope to be back soon doing The Impact and Pick of the Week podcasts with Simon and Sheldon pretty soon. They’ve been doing a great job so go listen to them. On to the best of last week! Also, this will be the last Top 5 Comics of the Week, listen to The Impact this week for the new things we will be doing on Comic Impact! 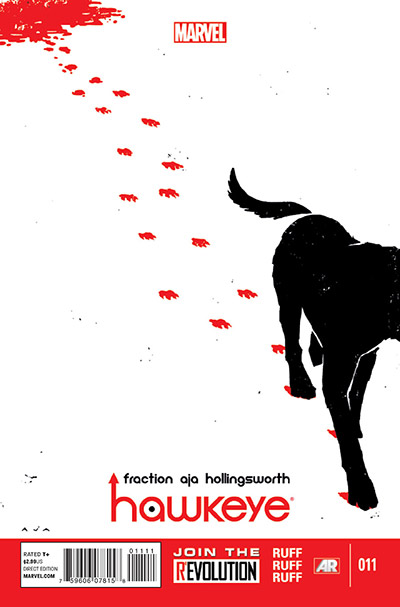 By now you’ve probably heard that this is one of the best single issues of not only Hawkeye, not only any Marvel comics, but one of the best single issues ever in comics, and I have to say that the hype is true. This issue is the standard that comics will be held, or at least should be. Now I’m not saying that every comic book issue should be doing something quirky or gimmicky to sell issues. Some of my favorite comics are just really fun adventures that surprise me. Every now and then though a comic comes along and changes stuff and creates something really special. And this issue is that something special.

I think that Matt Fraction is a very creative writer and has a huge appreciation for the medium and the stories that could be told using this medium. Now while I’ve really loved what this Hawkeye series has become I don’t expect something like this issue to be the norm. I like experimentation and getting new and different things but too much of something like this doesn’t make it special when we actually get it.

With all that out of the way that in my 10 plus years of readings comics I’ve never seen anything like this issue before. You can yell at me if you want and you can tell me that stuff like this has shown up in other more artistic comics and that’s fine. I can’t read everything and I’ll never be able to. Heck, I’ll even go as far and say that I’m not surprised that something similar to this could exist in some other comic but for this to be published by Marvel comics is what makes it that much better. The fact that Marvel decided it was ok to publish something like this is amazing and shows trust in the creative team. The creative team deserves all the credit here though. The execution of the book is just amazing. The story is pretty straight forward, but its execution is where this comic shines. I love the way this issue is colored and presented, the diagrams and how Pizza Dog sees things and associates things. My favorite panel of the comic comes at the end, on the second to last page, the middle panel where Clint is eating and Kate is standing outside his door. They may be separated by a few feet but the fact that they’re both in color but the space between them in white and not colored speaks volumes to how far off the rails their friendship has gotten off tracks. It’s simple but just so effective.

Alright folks, if you didn’t read my review of the first issue then go and read that, if you did then I want you to recall how much I loved the first issue and I’ll tell you right now that if the Pizza Dog issue of Hawkeye didn’t come out this would have been number one again. I should have expected it but I didn’t really see it coming, I’m not talking about some Earth shattering reveal, I’m talking about in the second issue getting a full on explanation about that the government thinks is going on in this underwater operation and trying to figure out what the creature that was revealed at the end of the first is, or at least could possibly be, so much so that we’re at least getting some connection to the past caveman events that were shown in last issue and what could possibly be coming up in the future events but the direct connection isn’t there yet, but somehow it involves the Moon fucking exploding!!! No biggie though.

As for the explanation, it’s more rooted in science than I was expecting and I like that I can’t figure out if it’s actual science or science fiction, making this a pretty interesting idea and thought provoking book in aspects of science and evolution and world history. This creature that is found is a humanoid with fins and fish elements and it’s not out of the realm of possibility that humans could have taken this turn in evolution if for whatever reason land wasn’t formed and we had to stay in the water.

All the science stuff to me is really interesting, but my favorite aspect of this book is the horror elements. They’re subtle but really affective, first of all the dream stuff, I don’t know where it’s going but I’m not of those people that believes that dreams are a way of out brain figuring things out but also helping us deal with emotions and fears that we may not be able to comprehend on a face to face level. That’s why some dreams are scary and are called nightmares, because they’re scary to deal with. Dr. Archer is one of the people affected by these nightmares, which have started after seeing the creature but also in a flashback where she knows that something that she isn’t sharing or maybe doesn’t want to share or deal with. The other dreamer is the guy that fell into a coma after he was attacked by the creature. I love these aspects and the art and use of color and especially the setting because it of what it invokes. It can invoke anything really, but to me it prays on fears of isolation and that invokes some of my favorite horror films of all time like John Carpenter’s The Thing and Ridley Scott’s Alien. It might not be the same for you but I’m loving this comic so much and this could very well be my favorite thing I’ve read from Scott Snyder. 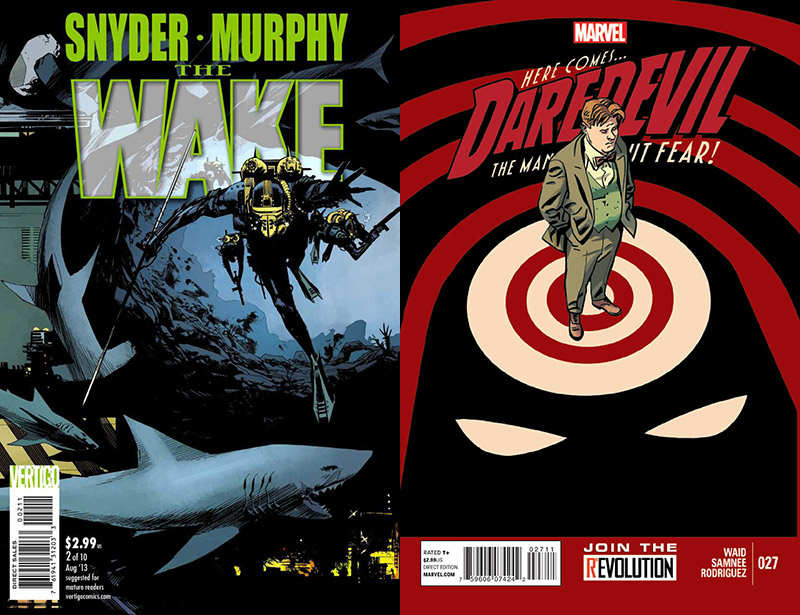 Daredevil27Man, this comic was a journey and a half. I’ve really enjoyed Mark Waid’s Daredevil run through this point. It started out with a more happy go lucky type version of Matt Murdock but it also stayed true to what came before, the identity stuff that happened in the Bendis/Maleev run to the horrible stuff with Milla during the Brubaker/Lark run to the not my favorite stuff that happened in during Shadowland. Waid has really made the character his own giving him a fresh voice, a hopeful voice which is different to the angry and rage fueled voice that Matt use to have.

Bullseye concocted a plan that took a long time to execute and ultimately failed. Matt got the better of him and actually ended up leaving Bullseye worse than when he was dead. Bullseye is a broken man and his body isn’t the same anymore and now he’s been blinded by the same chemical waste that blinded Matt when he was a child. Bullseye has now lost the only thing he had left, the only advantage he had over Matt. But to me this raises some questions and more problems than Matt had before. Now that we know how devious and meticulous Bullseye can be, can the chemicals affect him the same way as Matt or will it be different? Also, does he now have the same powers as Matt himself? And since Bullseye is heading to a hospital, are they going to treat him and help him rehabilitate? There is so much more that I’m interested in seeing happening, but I know it’s going to be a long time before we see Bullseye back.

Wolverine and the X-Men was one of the first comic reviews I did for Comic Impact and I’m so happy that it’s stayed consistently on my Top 5 of the week since then. I’ve loved Jason Aaron’s take on these characters and this issue is no different. His bringing together of Iceman and Kitty has been one of my favorite things to happen in the series and they are a lovely couple who are very funny together and complement each other really well.

The scenes where Wolverine is getting fed up with searching for the Hellfire Club and decides that the best way to do it is to put the Bamfs on leashes and serve them whiskey to teleport him to where the club is was particularly inspired and it made for one hell of an amazing cover by Nick Bradshaw and Laura Martin.

There’s nothing like a lover scorned and Toad has just been scorned by Paige after leaving everything he had at the X-Mansion to go to the Hellfire Club. But all he did was go from being janitor of one place to the other, and that doesn’t sit right with him, as well as being yelled at by his girlfriend. Whatever is going to go down with the Hellfire Club, he’s going to be a crucial part in what happens. Mark my words. 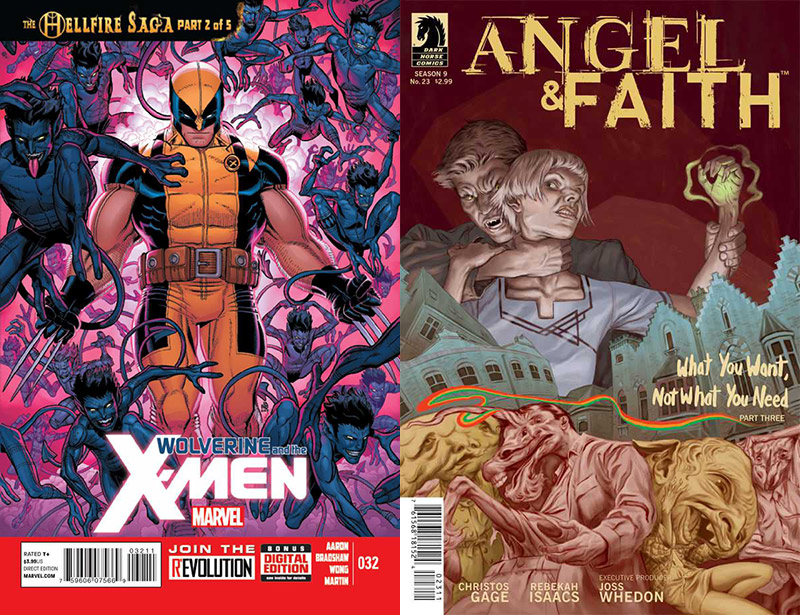 Angel and Faith #23 by Christos Gage and Rebekah Isaacs [Dark Horse]
“What You Want, Now What You Need” Part Three

I’m not going to mess around here folks, I’m going to shoot you straight and be honest with you guys. I don’t have much to say about this comic other than it was really good and that’s why it’s in the top 5. I’ve been enjoying this comic since it started. In this issue there are a couple of deaths, both on the side of the good guys and the side of the bad guys. As I typed that I realized that those sides are up to you to decide who’s on them. This book takes place from Angel’s point of view but at the same time it hasn’t painted the bad guys, or at least one bad guy as an all out villain. But, I’m looking forward to see how this ends, we have 2 issues left and they’ve just accidentally unleashed a plague that will wipe out half of humanity. Oh yeah, that happened.