Remember Antonio’s Top 5? Well we decided to change it up so that you get to see Simon and Sheldon Top 5!

That’s right if you find your self gravitating to more of Sheldon or Simon’s taste in books you can follow along every week and then take a listen to the Pick of The Week Podcast on Wednesday to hear more thoughts on each book that they picked! It is just that simple! So enjoy the books every week at your favorite community for comic news, reviews, podcast and more only here at Comic Impact! 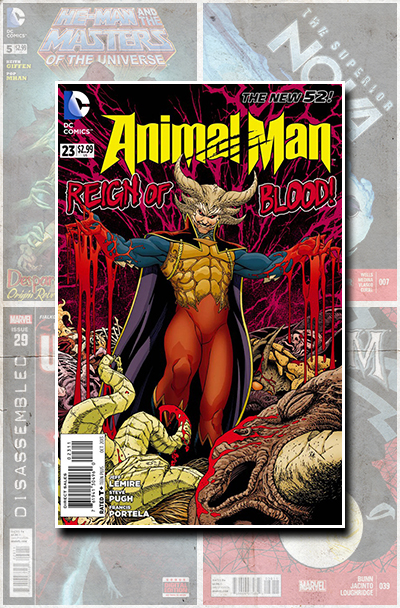 In the shocking conclusion of “Splinter Species,” Brother Blood and a stunning murder have Animal Man on the brink of extinction!

• Nova’s Eventful World-Wide Adventure Rockets Roaringly Into Our Renegade Spider!
• Zeb Wells (“Robot Chicken”, dressing as Thor on the internet) and Paco Medina (Ultimate X-Men) continue the story of Marvel’s newest, least experienced hero: Sam Alexander.
• We’ll get to tying into Infinity next month, but you should probably pick this one up first.

Ultimate Comics The Ultimates #29 – By Joshua Hale Fialkov and artwork by Carmine Di Giandomenico & Lorenzo Ruggiero
• “ULTIMATES DISASSEMBLED” CONTINUES!!!
• Twenty seconds in the life of QUICKSILVER…which may prove to be his last!
• The identity of ULTIMATE KANG REVEALED!

• Venom’s secret identity is discovered! And not by whom you’d expect!
• A hit has been taken out on Venom’s life–and cold-blooded killers are crawling out of the woodwork to collect!
• Even in tough times, every super hero needs a sidekick, right?

Bloodshot #0 by Matt Kindt with artwork by Chriscross

From the darkest days of World War II and Korea, and through the hell of Vietnam and Afghanistan, Bloodshot’s origin leaves a bloody trail of discarded lives and forgotten families. But which memories are real? Which families? Which children? Is Bloodshot many men…or no man at all? Is he simply a soulless killing machine or something more? Who is responsible? And why have they engineered the most dangerous weapon ever conceived by man? 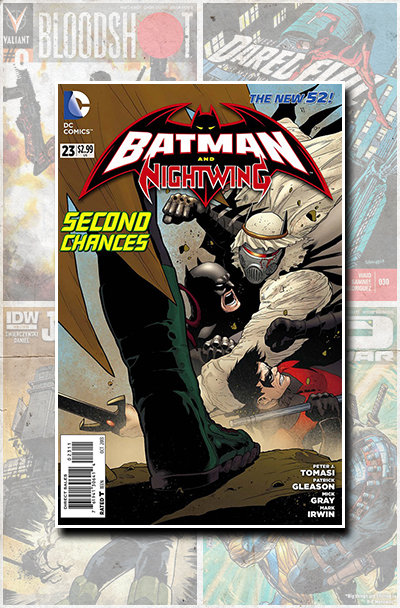 Daredevil #30  – by Mark Waid with artwork by Chris Samnee

Judge Dredd #10 by  Duane Swierczynski with artwork by Nelson Daniel

Judge Dredd, along with his multi-eyed precog mutie companion Dannn, fight venture through the Cursed Earth in pursuit of the renegade droids who stole the only thing that can save Mega-City One. Horrific obstacles stand in their way… but none more horrific than the worst backwoods criminal posse ever to set foot on irradiated soil: the Angel Gang!

When these longtime fan-favorite villains make their U.S. debut, you’d better make sure your dial is set to “brutal”…

THE ROAD TO UNITY CONTINUES!

X-O Manowar and the Eternal Warrior. Once they were brothers-in-arms, comrades sworn to the same cause. But now they find themselves on opposing sides of a battle for the very fate of civilization itself. Aric of Dacia and the immense power that he wields have the potential to the plunge the world into a new era of war, and the only man who can broker a world peace also happens its to be its most fearsome warrior. But can Gilad settle this conflict with words rather weapons? And does he know how? As the world watches, two of Valiant’s most fearsome heroes will meet once again – and the outcome of their latest clash will decide the fate of us all.