Villains are wicked causing us sorrow –
Fiends do evil till they’re put down! 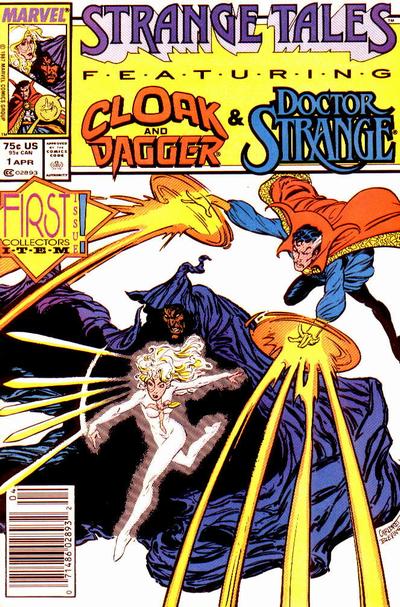 Comic book fans have a few areas of disagreement. A minor one has been the question of the precise date which marks the end of the Bronze Age of Comics. As an unabashed fanatic of all works by Boisterous Bill Mantlo, I place that date firmly in the late 1980s, at the point where he retired from his illustrious scripting career to become a public legal defender (in effect, becoming a real-life super hero). Bill authored more than 75 Marvel titles encompassing hundreds of issues, magazines and special editions. Some of them are more well-known, such as Rom, Micronauts and Spectacular Spider-Man, but he also wrote a variety of one-shots, adaptations and mini-series, such as X-Men Heroes for Hope, The Last Starfighter and Vision & The Scarlet Witch. One achievement which is often overlooked is the launching of new titles. He started the ball rolling for titles like The Transformers and Amazing Adventures (Vol. 4), which were then taken over by other writers to later attain various levels of success. It is a great honor for a comic book writer to be asked to spearhead a new title, especially when it allows him to spotlight characters he created. In 1987, Mantlo was tasked with re-launching the esteemed Marvel Comics title “Strange Tales” to a new generation of readers.

In 1951, the first volume of Strange Tales hit newsstands everywhere, back when those was the only places to buy comic books. It featured the works of artists such as Jack Kirby and Steve Ditko, along with writers like Jim Steranko and Jerry Siegel. We were introduced to new characters such as Doctor Strange, Master of the Mystic Arts and Nick Fury, Agent of S.H.I.E.L.D., and it transitioned from horror stories to super hero fare as the Golden Age became the Silver Age. After a 19-year hiatus, the title returned under its original name, only modified to showcase the characters appearing inside. The very first storyline began in the April 1987 issue of Strange Tales Featuring Cloak & Dagger and Doctor Strange! The man who would become known as the Sorcerer Supreme had been around since the July 1963 issue of this same title, but Cloak & Dagger were created by Bill Mantlo and Ed Hannigan in March 1982 within the pages of Peter Parker, the Spectacular Spider-Man. Since then, they had more appearances in that same title and also had starred in their own bi-monthly series starting in 1985. After Cloak & Dagger #11 (March 1987), Marvel decided to replace this title and continue the duo’s adventures in the brand-new Strange Tales where they would share the book with Doctor Stephen Strange.

Both of these stories begin following major conflicts in the characters’ lives. With Cloak & Dagger, it was their long-range battle with drug traffickers – who were responsible for giving the heroes their powers – and Strange had just defeated the wizard Urthona in a rivalry for the title of Sorcerer Supreme as his own title had concluded (Doctor Strange #81, February 1987). Cloak & Dagger have stumbled in their quest, traveling by boat to India in search of vague leads. Strange, however, returns from his battle among the stars with injuries to his friends and his psyche. Cloak is brooding as always, pondering the horrors of their recent adventures, but he and Dagger become enveloped in a mass panic as the boat hits a reef just before docking. A hundredfold of passengers are flung into the water and the two heroes – despite all their power – are helpless to save them from drowning. Suddenly, a strange globe of light descends from the nearby city and hovers just above the sinking victims, and it proceeds to siphon away the “light” of their collective life force. They sink to the sea floor, lifeless, as Cloak watches in horror and Dagger with wonder.

Cloak & Dagger begin their search through Lashi, India after Dagger senses a sentient intelligence within the light-draining event they witnessed. After a brief search, they meet a group of light cultists. It turns out that Dagger’s runaway father is the spiritual leader of this group. She is thrilled by the reunion with the man who abandoned her as a child, and he seems genuinely happy to see her. The cultists revel in the sharing of their light with their leader and between each other. Cloak remains suspicious while Dagger thinks all this celebration of each others’ light is wonderful. He can’t wrap his head around it, but something seems wrong about the practice of draining the light away from the dying. Her father controls so much of the light that he has attained immense personal power, enough to drive away the darkness in Cloak and return him to his human state of Tyrone “Ty” Johnson! That’s how we are left until the next issue, with Dagger’s father, the “Lord of Light” standing over a helpless and de-powered Cloak as Dagger looks on in shock.

Strange has returned from his adventure with two abnormal beings in tow, Rintrah – an alien novice sorcerer, and Topaz, an empath of considerable power. In fact, it is her power which heals the mangled face of Strange’s assistant, Wong. After she heals his wounds and saves his life, she notices something wrong within the heart of the Master of the Mystic Arts. It is a pain buried deep down and suppressed by Strange, and she compels him to summon that for which his heart aches… Clea! She, who is his former apprentice and currently ruler of the Dark Dimension, fell in love with Stephen Strange during her apprenticeship, and he also with her. The remainder of the tale centers around his personal torment, where he cannot allow himself to love a woman because his role as “the mightiest magician in the cosmos” requires the utmost commitment, and thus the utmost forfeiture of his own feelings. Meanwhile, the battle which saved the world from a nefarious Sorcerer Supreme required Strange to destroy the artifacts throughout his Sanctum Sanctorum which kept many of the ethereal threats of the universe trapped and impotent. Now, they are free to roam and endanger humankind, and the first of them begin to coalesce and advance toward the magician who kept them imprisoned. It’s all lead-up and contemplation in this take, and you basically get a feel for the characters, their roles and the upcoming peril which will take shape over the next few issues. 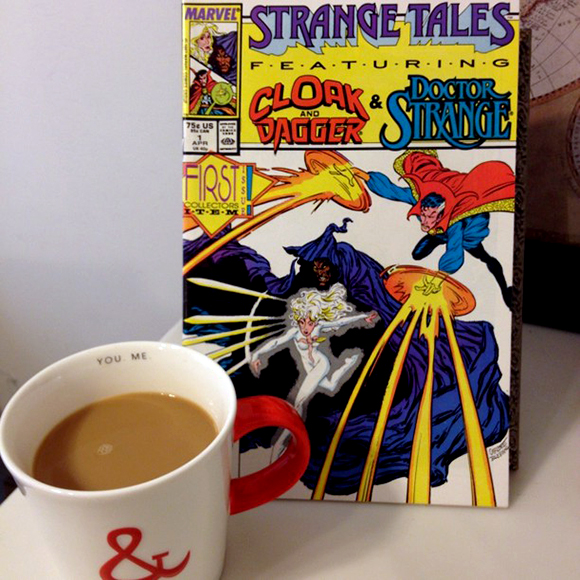 The pencil work in the Cloak & Dagger story is fine and very expressive, and there is stark contrast between the scenes which require simple forms and those which display ornate ceremonial chambers and congested city streets. The story itself is very compelling as you get a strong sense of the inter-dependency of the two titlular characters, as well as the events which threaten to place a rift between them. The one thing which suffers in this tale is the coloring, which I dare say is only five or six hues of the rainbow. The Doctor Strange story, however, is quite colorful, although the penciling is somewhat simplistic and uninspired. All the female characters seem to share the same face, so if it weren’t for the different colors, I’d have some trouble telling them apart in scenes of “talking heads”. While it is frustrating to have a lack of action, it is understandable considering that it only has to share half the pages with its roommates. However, there is a solid emotional component to the story, and we are drawn into the heartbreak of Clea and Strange’s inner conflict between the woman he loves and his duty to the universe. In all, it’s a highly enjoyable Bronze Age read, even if it’s pushing the boundary of that time period to its furthest extent. Plus, it offers a heckuva neat cover, which is fun to view over and over while enjoying your morning coffee. While you are digging this copy out of the back-issue bin, why don’t you grab the next few as well? You’ll be able to enjoy the telling of both stories to their conclusion, and a guaranteed way to Fare Thee Well!

Strange Tales Vol. 2 #1 is told in two parts: Cloak & Dagger scripted by Bill Mantlo, illustrated by Bret Blevins, colored by Mac Scheele and lettered by Ken Bruzenak, Doctor Strange scripted by Peter Gillis, illustrated by Chris Warner and Randy Emberlin, lettered by Kim Novak and colored by Bob Sharen, both stories edited by Carl Potts, with a cover by Carl Potts and Bret Blevens. Today’s column title adapted from The Doors with great respect and appreciation.