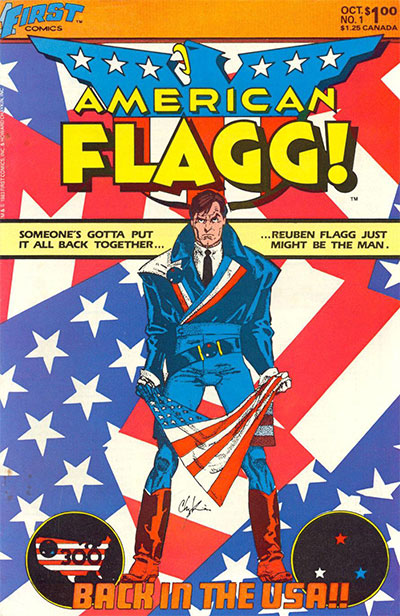 I wish that I’d been able to properly prepare you in advance, my dear friends. At the risk of giving you a seizure or coronary contraction, I’ve chosen something from OUTSIDE the Marvel stable for this week’s column. Unfortunately, I never know during the week which title will strike me as worthy of Comic Impact’s readers, so there was no opportunity to warn you. I shall count on you all to take such a shock in stride, true believers, so sip that coffee slowly today so your blood pressure doesn’t jump through the roof! In the early 1980s, Ken Levin and Mike Gold launched an alternative press comics company named First Comics. While competing with large publishers like Marvel and DC, it became known for groundbreaking titles such as Grimjack, Nexus, Dreadstar and Jon Sable. Not only could they offer creators the freedom to produce stories without the constraints of the Comics Code Authority, but also gave them rarely-before-seen creator rights, including ownership of their characters, titles and stories. One of the titles which developed an intensely passionate fan following was Howard Chaykin’s American Flagg, the story of an idealistic actor-cum-lawman who believes in the American dream despite the corruption and hopelessness of his dystopian future world. American Flagg would become one of Chaykin’s signature creations (along with Dominic Fortune, Cody Starbuck and Black Kiss) on his way to earning an Eagle Award to place next to his Inkpot Award.

Both science fiction and political satire, American Flagg #1 (October 1983) would lead to dozens of issues produced by Chaykin and others, but would stumble into relative obscurity as Chaykin eventually lost his inspiration and began focusing on other works. It’s always fun to see a creator’s idea of the future, but American Flagg literally became the future. Not only did it foresee the concept of reality television decades prior to Survivor and American Idol, but also foreshadowed how computer technology would eventually create many of the characters seen in TV shows and movies we enjoy today. Chaykin’s creative process incorporated Craftint Duoshade illustration boards, where he was able to apply shaded textures to comic pages long before computers were able to do so. In addition, American Flagg is credited by Brian Michael Bendis, Mike Norton and Warren Ellis as a major influence on their work. Chaykin makes liberal use of symbols, logos, fonts and product placement/advertisement to convey a sense of commercialism, materialism and aloof immorality for the world in which the story takes place.

Reuben Flagg was born in the year 2000 at Hammarskjold Center on Mars (which would make him a 13 year-old Martian now as of this writing), where he moved from being a college dropout to a career as a stand-up comedian, then to star as Mark Thrust, Sexus Ranger, the lead character in a raunchy and popular television show. Once CGI technology made his continued presence obsolete, the show continued while Flagg took an assignment as member of the Plexus Rangers, a peacekeeping force (i.e. Earthside militia of an all-encompassing yet absentee corporation, Plex USA). Plex basically ran the show on Earth since the U.S. government had relocated to Mars and Islamic forces had overthrown the Soviet Union. They had their corporate fingers in everything, which for the purposes of this story consists of media, banking, transportation, arms and pharmaceuticals. The book would come to form Chaykin’s statement on politics, consumerism and society as he portrayed Flagg as a hero fighting for the American ideal in a high-tech yet spiritually empty world. The story, however, begins with Flagg’s flight – a Mars-Luna shuttle – arriving at the Plexport and Plexmall (named for Plex USA, of course), which is made up of Jerry Rigg Custom Firearms (self-explanatory), the Love Canal Adult Center (brothel) and – Flagg’s destination – the Plexus Ranger Station.

This is certainly not a book for kids, but neither is it obscene. Like League of Extraordinary Gentleman, The Dark Knight Returns and Watchmen, American Flagg comes with many layers which are worth peeling away upon the many re-reads you’ll want to enjoy. Flagg’s supervisor, an apathetic shirker, brags about the city’s violence earning recognition from “Firefight”, a COPS-like reality TV show which shows real footage of armed clashes. Flagg’s disparaging reply of “Bread and circuses”– though unappreciated by the slow-witted supervisor – is an aptly negative commentary on the quality and morality of mass media. Later, Flagg discovers how subliminal messages of violence are being shown during each episode of Firefight, and he starts to take action against the giant evil corporation which only wishes to foster more fighting and show it on TV to placate the masses (although it’s a mystery why only Flagg and a talking cat can see the subliminal messages). Questions are posed throughout the issue, such as “where do [the gangs] get their weapons?”, leading one to wonder the same thing about similar occurrences in the real world. The commercialism is everywhere, ranging from ads for Chicago’s 75 different paramilitary poli-clubs to the “MOW” brand name stamped on frozen globes of sleeping drugs fired at the “Gogangs” (anarchist terrorist motorcycle clubs) at the Chicago O’Hare Plexport.

Chaykin makes some interesting interpretations of the future in terms of technology and world affairs, but in other areas he is stuck firmly in the 1980s. One female character wears legwarmers. Flagg’s transfer orders are all in paper, as are the documents carried by the “Brazilian Rep”, a character I’m sure will return in future issues. While Flagg’s boss is watching his favorite show in a futuristic visor, it’s wired to the television. And later, Flagg discovers the means for interrupting the Plex’s violence-inducing subliminal messages from what looks like a VHS cassette. He’s a flawed hero for flawed times, by no means a perfect man. After leaving a violent, pornographic television show and the first thing he does upon his new ranger assignment is to take advantage of the “hospitality” of the local madam, Gretchen Holstrum. However, Flagg grows ever more disheartened with the abuses by the Plex, the indifference of his peers and the daily routine where Gogangs attack the Plexport and are pacified with rubber bullets and sleeping gas. The status quo grates on him, especially when the leader of the biggest gang bribes Flagg to keep perpetuating the cycle. He finally snaps from frustration, taking down the Gogangs and suspending the subliminals-filled TV show, all in the name of protecting the people of Chicago and ending wrongs. 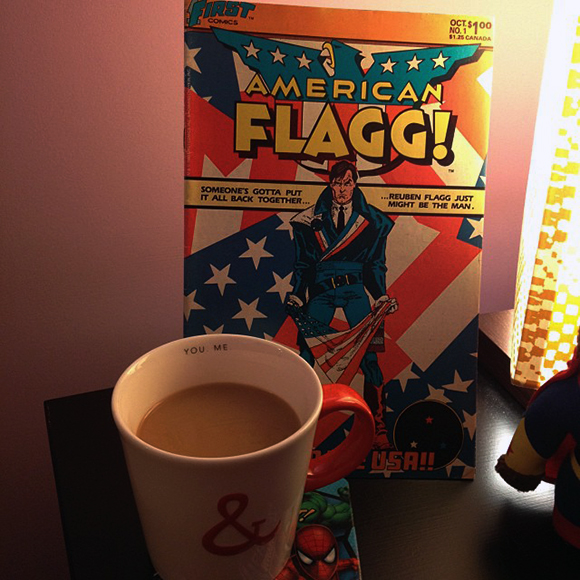 The issue may only be 28 pages long, but you get a heckuva lot of story and content in American Flagg #1, so it feels much longer. It’s beautifully rendered, lettered and colored, and has some of the most amazing designs, page layouts, graphic imagery, scene transitions and character interactions of any book you’re likely to find. The visuals are truly an accomplished feat and they drag you into the story whether you wish to come along or not. There are no unnecessary backgrounds, yet he fills in unused spaces with frames and windows which help the telling of the story in various ways. One page illustrates step-by-step how the “Year of the Domino” (1996) brought a collapse of nations, banks, alliances and everything else that led to Plex USA taking over most business areas and centers of power. Some of Chaykin’s modern creations that I’ve read seem to have many characters who look and act alike, so I was pleased to see that these characters – Flagg, Mandy, Raul the cat, Krieger, etc. – are each distinctive in both appearance and attitude. We only see a single non-white character in the entire book, who is the mayor of Chicago. At the time of publication, Chicago had just gained its first and only African-American mayor, Harold Washington, but this character is considerably less likable. Very few of the them are completely altruistic and each one has their own agenda, sometimes sinister but always self-centered, making this story very noir-like in its tone. Chaykin suggests that his audience further understand his tone by reading Brave New World by Aldous Huxley and 1984 by George Orwell, both tales of futures which could use a Flagg-like hero. As the story begins in 2031, Plex USA’s motto of “Back on the Track for ‘76” (the U.S. tricentennial) seems awfully empty as a plan for economic recovery 45 years into their future, but I’m certain that is Chaykin’s point.

Two quotes end this premier issue: “If you want a symbolic gesture, don’t burn the flag, wash it” (Norman Thomas) and “Things are more like they are now that they have ever been before” (Dwight D. Eisenhower). First Comics editor Mike Gold calls Chaykin “the most patriotic person I know”, someone with great pride in America and whose patriotism comes from “great hopes for America”. It is that same hope that propels Reuben Flagg into our hearts and imaginations (“our” meaning you and me, dear readers). Despite all the problems in Flagg’s world and the parallels one can find to our own world, neither Flagg nor the reader are allowed to lose hope that the American ideal is worth pursuing. We can enjoy the American dream as much as we enjoy a good cappuccino or Starbucks™ Blonde©. No matter what the politicians do to frustrate us or how much garbage the TV moguls cram down our throats, you can count on Comics ‘n Coffee to always offer you a heartfelt Fare Thee Well!

American Flagg #1 is written and illustrated by Howard Chaykin, lettered by Ken Bruzenak, colored by Lynn Varley and edited by Mike Gold. Today’s column title adapted from West Side Story by Leonard Bernstein and Stephen Sondheim with great respect and appreciation.