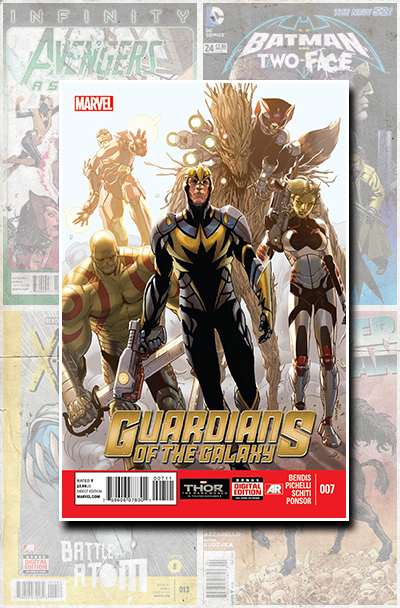 Avengers Assemble #20 by Al Ewing and Artwork by Jorge Moilna

Featuring the Uncanny Avengers! A giant naked man punches a Quinjet! An eight-year-old girl fights a centaur at the heart of an atom! Wonder Man’s quest for peace!

Two-Face’s first epic in The New 52 sees Batman unraveling the mysterious connections between Harvey Dent’s life and the origin of Carrie Kelley.

With the mysterious Angela now on the team and the massive effects of Infinity beginning to rise, the galaxy’s most mismatched heroes find themselves at a crossroads.

After the shocking events of issue #23, Wonder Woman’s life has changed forever…but what if she refuses to walk the path the gods–and her mentor–have laid out for her?

Trapped in an enemy stronghold, Bloodshot has been broken – dismantled piece-by-piece, nanite-by-nanite by the Harbinger Foundation’s most disturbed minds! But when Bloodshot’s signal goes dark, who can the black ops military contractor known as Rising Spirit bring in to recover its most expensive soldier? Time to call in…H.A.R.D. Corps! 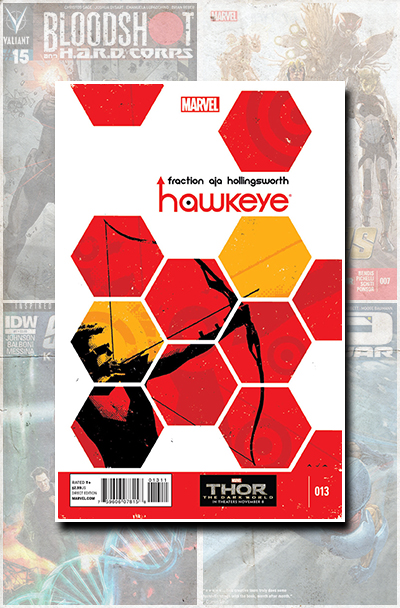 With the mysterious Angela now on the team and the massive effects of Infinity beginning to rise, the galaxy’s most mismatched heroes find themselves at a crossroads.

Hawkeye #13 by Matt Fraction with artwork by David Aja

Fraction and Aja continue the surprise comic hit of the century!

After a lifetime of decisions both good and bad, Clint and Barney Barton have to realize they are brothers and ultimately, they’re the only ones who can save one another. I mean if they don’t kill each other first.

Good luck with that, Barton brothers.

Shall we begin?’ Don’t miss this all-new mini-series event overseen by Star Trek Into Darkness writer/producer Roberto Orci! Witness the shocking origin of Khan Noonien Singh from his earliest years through his rise to power during the epic Eugenics Wars! Behold the events that led to his escape from Earth aboard the Botany Bay! Learn the truth behind his re-awakening by Admiral Marcus and Section 31! It’s the origin of Star Trek’s greatest villain, only from IDW!

Toward the future, toward UNITY…

With his nation state of Dacia fortified in eastern Romania, X-O Manowar has bent the world to his will. But he will not stand unopposed. With the assembled forces of the United Nations and NATO primed to assail the newly founded homeland of the Visigoth people, the man inside the indestructible Manowar armor is about find himself more vulnerable than ever – and with everything he holds dear on the threshold of a terrible turning point for the Valiant Universe…