It is Tuesday time to find out Sheldon and Simon’s top 5 comics from last week. Oh wait Sheldon is on his honeymoon. So joining Simon this week is Sebastian so take a look at Simon and Sebastian’s Top 5 from last week and then take a listen to the Pick of The Week Podcast on Wednesday to hear more thoughts on each book that they picked! It is just that simple! So enjoy the books every week at your favorite community for comic news, reviews, podcast and more only here at Comic Impact! 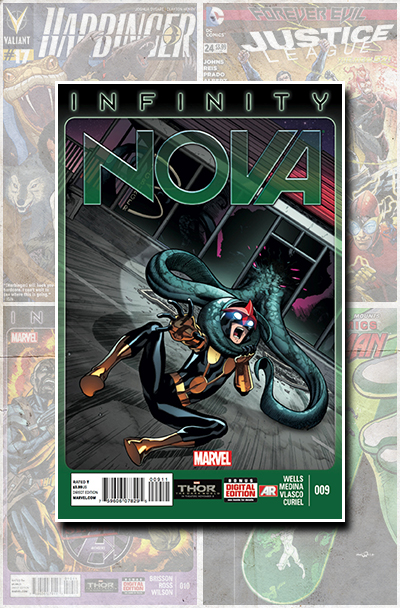 A prisoner of the Harbinger Wars…unleashed.

While Peter and the Renegades deal with the devastating fallout of last summer’s blockbuster crossover event, an unforeseen threat to Toyo Harada’s empire lies dormant deep within the walls of Harada’s own fortified prison facility. The Valiant Universe gets larger as a fan favorite character from Harbinger Wars makes their triumphant return!

A FOREVER EVIL tie-in! The Justice League is dead, but who’s at the top of the food chain now? And what does Black Adam have to say about it?

How will new Nova Sam Alexander take on Thanos’ galactic fleets? Hopefully with a few New Warriors on his team! And will Nova be able to help the New Warriors get their team back together?

How will Nick Fury’s team fare against the hordes of Thanos? And which members will be thrown in direct line of fire?

The end of the first chapter of the Miles Morales saga. Miles discovers one of the big secrets of his origin. Guest starring Cloak and Dagger and Spider-Woman.

Adventures of Superman #6 by J.T. Krul and  Artwork  by Marcus To

A young Superman faces a threat like he’s never seen before when a powerful alien warlord named Mongul shows up on Earth’s doorstep looking for trouble! Will Superman heed the counsel of his Kryptonian father? Or will the words of a certain silver-tongued Phantom Zone prisoner cloud his judgment? 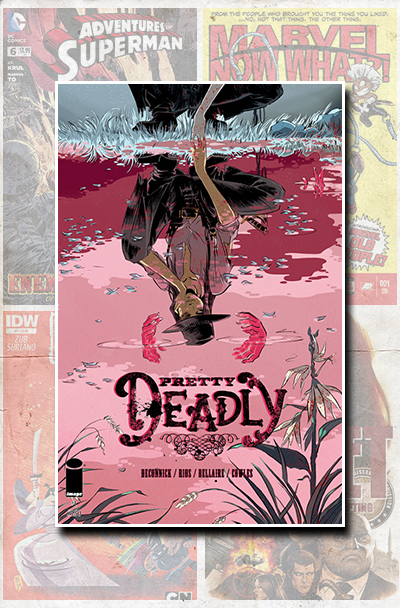 Want to see the wedding of Thor and Storm? Captain America get cat fished? An intervention from The Watcher? All the Marvel stories that you never thought you’d see!

KELLY SUE DECONNICK (Avengers Assemble, Captain Marvel) & EMMA RÍOS (Dr. Strange, Osborn) reunite to bring you an all-new ongoing series that marries the magical realism of Sandman with the western brutality of Preacher. Death’s daughter rides the wind on a horse made of smoke and her face bears the skull marks of her father. Her tale of retribution is as beautifully lush as it is unflinchingly savage.

Samurai Jack #1 –  By Jim Zubkavich and Artwork  by Andy Suriano

Cartoon Network’s hit animated series is back at IDW! The legendary samurai known only as ‘Jack’ is stranded in a strange future ruled by the demonic wizard, Aku. His quest to return back to the past has tested him many times, but now the stakes are higher than ever. Can an ancient relic known as the Rope of Eons finally take him home? Writer Jim Zub (Skullkickers, Street Fighter) and artist Andy Suriano (Character Designer on the original Samurai Jack TV series) begin a new era of samurai adventure!

Velvet #1 by Ed Brubaker and Artwork  by  Steve Epting

ED BRUBAKER and STEVE EPTING redefined Captain America with the “Winter Soldier” saga… and everything they’ve done so far has been leading to VELVET!