When Valiant returned, their very first book was X-O Manowar. Now – after 18 issues (at the time of this review) – we realize that it’s all been leading up to this event in the Valiant Universe. This is Valiant’s second cross-company event of 2013. The first one was Harbinger Wars back in April, of which I was a total fan. This new event is called “Unity” brought to us by the ongoing team of Matt Kindt, Doug Braithwaite and Brian Reber.

The official synopsis for Unity from Valiant Entertainment is: “To kill a king, he has created an army. The world’s most dangerous man, Toyo Harada, has been struck by the one thing he never thought possible – fear. Halfway across the globe, a new power threatens to topple modern civilization and, to preempt the cataclysm that is to come, Harada will unite the most lethal, most volatile, most unforgiving team the world has ever known – UNITY. Their mission: defeat the warrior king armed with the universe’s most powerful weapon. Kill X-O Manowar!” 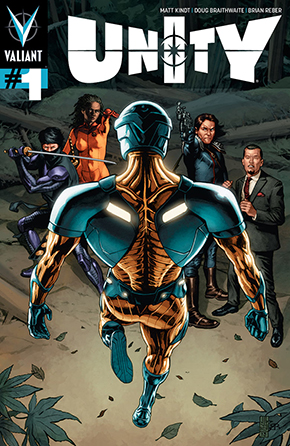 Yeah, I know what you’re asking yourself: “Simon, I haven’t read one single Valiant comic since the relaunch or ever! Can we still be friends? Also can I understand what’s going on?” My answer to both questions is a heartfelt “yes!”. What Valiant does is introduce you to an epic universe in the first part. Without making it too complicated for readers you can easily jump on this book, which is a big plus. A lot of comic events are currently going on with other publishers where you literally need Wikipedia to find out what happened in previous issues or tie-ins. Unity is so new-reader friendly and so rewarding for old fans that it’s no surprise that it is turning out to be one of the hottest events of the year.

Now, without giving away too many spoilers about this book, I must say that I love how it opens up with a reporter talking about her experience with Aric. When Aric of Dacia took over a nation with the X-O Manowar armor, he now the most wanted man in the Valiant Universe. Once again, we are introduced to Toyo Harada. If you’ve been reading Harbinger or Bloodshot and H.A.R.D. Corps. You will know he is the man behind everything that happens in the Valiant Universe. If not, you can easily figure it out in the first few panels. One line of Harada’s which really stuck with me was his desire to not use nuclear weapons. If you’re familiar with his backstory (Harbinger #0), you know exactly why this line largely represents the way he looks at life.

There are many great scenes; one of them is where The Eternal Warrior demonstrates tremendous leadership skills as a general. I can see why he was such a bad ass back in the day. This also references two previous issues of X-O Manowar. This first issue will also make fans of the character of Ninjak more than happy as the tension building since in X-O Manowar #5 (pick of the week) climaxes in a BAD-ASS way. If you’ve been dying to see more of Ninjak, you’re going to get that in Unity, as there is a epic battle between Ninjak and X-O Manowar that will make you wish there where more pages in this book.

I can’t express how rewarding this book is for fans of great comics. Especially with all the events going in comics, it is nice to see a event that makes perfect sense and communicates its importance and why it’s happening without selling 45 different tie-ins. This is how you tell an event, so – Marvel and DC Comics – I hope you’re taking notes!

I guarantee you that some characters will not make it out of this event alive. When someone dies in the Valiant universe they stay dead. Unity is a force to be reckoned with you don’t want to miss out on it because I have a feeling that we’ll see new series launched in its aftermath. Unity will make a impact in the Valiant Universe forever. So, go out buy this book and join us on next weeks podcast as we talk about this issue in greater detail.