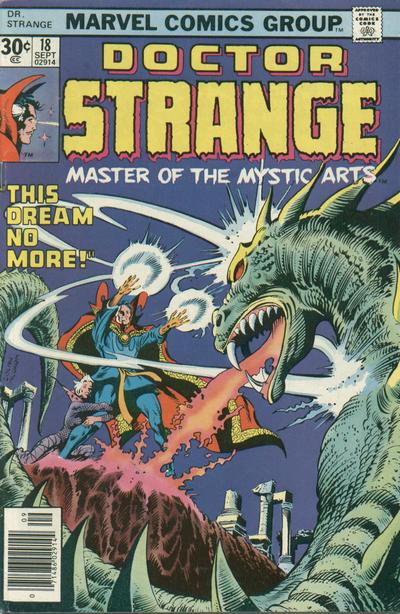 Nothing can be said to be certain, except death, taxes and occasional grounds in your cup of joe.

“Tricks and treachery are the practice of fools, that don’t have brains enough to be honest.” Benjamin Franklin was a man of many talents, not the least of which was being one of the founding fathers of the United States of America. Most of us are familiar with his exploits as a diplomat, a statesman, a scientist (think of kites) and a postmaster. What they didn’t teach in my history books, however, was how much he was a ladies man. In today’s scintillating story, the Master of the Mystic Arts, Doctor Stephen Strange, comes face to face with “The First American” in an adventure which began in the previous issue, Doctor Strange #17. The Sorcerer Supreme and his lovely companion, Clea, traveled backward in time to investigate a tome which theft from his Sanctum Sanctorum was thwarted – a tome named “New Atlantis”, by Sir Francis Bacon! Coinciding with the U.S. Bicentennial, the attempted theft of a text written by one of America’s most influential statesmen and philosophers is too much of a coincidence. Thus, our hero and heroine ride the sorcerous spaceways back more than 350 years to meet Sir Francis himself!

Strange, Clea, Bacon and their associates successfully fend off the attack of the minions of a sorcerer named Stygyro, followed by a hasty farewell 150 years into the timestream! Strange and Clea land in London, right as Benjamin Franklin boards a ship headed for the American Colonies. It is March, 1775, and while they are compelled to board the vessel to meet with Franklin, Strange notices that Stygyro has followed them through time and is stalking them on the ship. As I mentioned before, Franklin’s appeal to the opposite sex is prevalent, and he begins to put the moves on Clea during the trio’s very first meeting. Suddenly, Strange leaps into action as a gargantuan sea serpent attacks the ship. While Stygyro controls the beast from the ship’s crow’s nest, Strange hurls his magicks against this creature as large as the ship itself!

Strange spots Stygyro as the source of the peril and attempts to intercept his foe. However the malicious magician gives the good doctor the slip, and the Hyborian horror dives down into the depths beyond the sight of all. Strange, Clea and Franklin search the entire ship for Stygyro, but to no avail. In the meanwhile, Clea begins to show her annoyance toward Stephen as he is always tending to his duties and neglects to show affection to her, who he claims to love. She makes it crystal clear to him that he does not give enough of himself to satisfy her needs, despite her understanding of his responsibilities as the Sorcerer Supreme. Their bickering has to wait when the ship lurches at the end of an impossible cliff in the middle of the ocean! Strange calls upon his powers to send winds against the sails, bringing the vessel to a halt just as it balances at the edge of this high precipice. 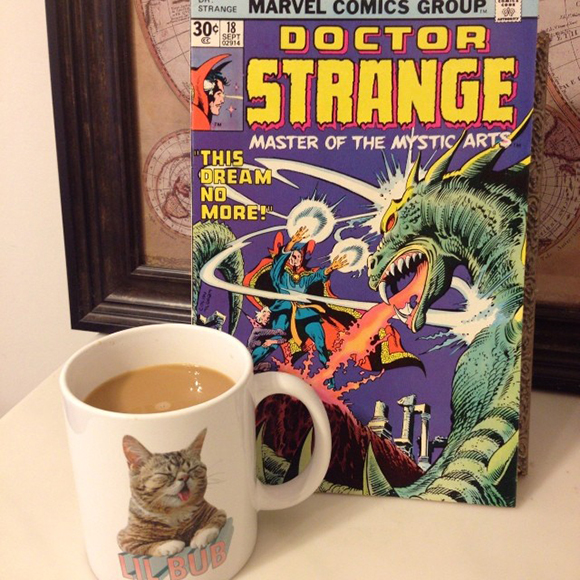 Using his magic Cloak of Levitation to investigate, Strange dives down into this mysterious hole in the ocean and finds an ancient city, long lost to the depths of the sea. He ponders the origin of the city (is it a lost part of Atlantis?), admires an old painting of Stygyro (as a much younger man) and then has to battle the sea serpent once more – the beast which has somehow come to wear the face of Stygyro himself! All the meanwhile, Franklin takes advantage of the downtime by romancing Clea over some “good British whiskey”. The battle under the sea is furious with the sorcerer-serpent thrashing around and bashing the city into rubble until Strange gets the upper hand. The end of hostilities causes the ocean to return to its normal state, collapsing from all sides and surrounding our hero under a mile of water. Somehow, Strange finds his way to the surface and the tension between he, Clea and Franklin becomes unbearably thick. Sadly, this is the end of today’s tale, being that this is the second issue in a three-part story.

Englehart and Colan created a true masterwork in their run on Doctor Strange. The story in each issue is always a combination of timeless fun, engaging drama, sharp wit, creative characterization and compelling storytelling. It’s easy to look forward to each issue, particularly when you consider the Colan artwork. Not only does he present Strange, Clea and the other characters as beautiful beings which leap out from the page, but his use of layouts creates incredible energy, tension and flow to the story in perfect proportions. While I had a bit of fun with the last column featuring Doctor Strange, for the most bang for your buck you should read some of the stories from this amazing duo. I certainly hope you all have a wonderful New Year’s, my fantastic friends! My resolution is to bring you even more classic comics from the Bronze Age and beyond. It might interest you that “The Man” himself, Stan Lee, turned 91 last weekend. So in his honor, instead of my usual farewell, I shall leave you with the immortal words which you all know so well, EXCELSIOR!

Doctor Strange #18 is written by Steve Englehart, penciled by Gene Colan, inked by Tom Palmer, lettered by Denise Wohl, colored by Petra Goldberg and edited by Archie Goodwin, with a cover by Gene Colan.