Swords and Sorcery and a mouth full’a Sass! 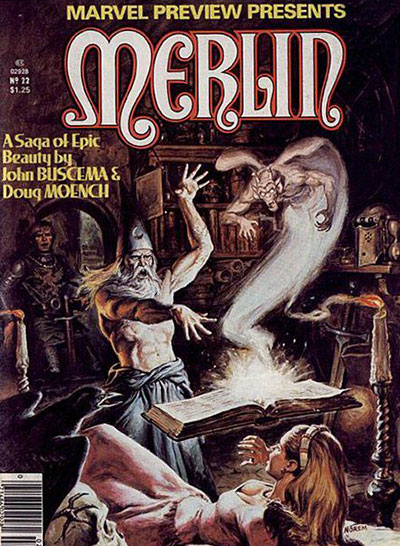 Continuing the theme of medieval fantasy adventure (after all, I’m celebrating the 40th birthday of the Dungeons & Dragons RPG), we find ourselves in the midst of a tale of Camelot. Jovial John Buscema is well known for his incredible renderings during a historic run on Conan the Barbarian. At the height of his creative apogee, Marvel’s editorial team became aware of his fondness for the Prince Valiant newspaper strip. Further investigation revealed an idea which had been buzzing around John’s mind for a while concerning the legendary wizard, Merlin, and his service to the king of Camelot, Arthur. For a while, he was given full creative control of this project, and Marvel absolutely loved the pages he was turning in. However, as the project wore on, John noted that the story began to get away from him – he wasn’t sure where the finish line was, despite his passion for the artwork. Doug Moench was called in to join the Merlin team and “Quest of the King” was born!

Our tale begins with Arthur and his court engaging in a common sport of the age… hunting. Quickly into the hunt, however, Arthur himself finds a wounded knight within the forest, unconscious near his mount. Rushing the injured stranger back to the castle, Arthur demands all haste in his confidant and loyal servant, Merlin. The great sorcerer applies his healing magicks and, with a few days of rest, the youth is back on his feet. Addressing the court, the young man named Beliar regales his story to Arthur and his Round Table Knights. He claims to be the son of Asmodiar, a baron of the Netherlands. When he and his brother were sprouting into manhood, they engaged in their first hunt alone, which tragically ended with his brother accidentally riding into the path of Beliar’s arrow. The death of the baron’s elder son was so devastating that Beliar chose to leave rather than serve as a constant reminder of the cause of his father’s great loss. He made his way into the world, doing good where he could – partially for survival and partially for redemption – until he came upon his last mission.

Beliar found a village which had been plagued by a fire-breathing dragon, so he pursued the monster by following its trail of scorched earth and bleached bones. When finding the beast, he found himself outmatched and ill-prepared. In desperation, he climbed a rockface and, when the creature was right below, he started a rockslide which crushed the dragon, and he left for parts unknown where his injuries laid him low just within Camelot’s borders. The tale is a fascinating one and highly entertaining to Arthur and his knights, but Merlin has his suspicions (he has never seen a fire-breathing dragon and believes them to be myth). It is at that moment that Sir Lancelot of the Lake returns to the castle from his adventures, meeting Beliar for the first time. He accepts the lad as easily as Arthur’s other liegemen and subjects, including Arthur’s own wife, Queen Guinevere.

The mage’s suspicions grow more intense when he catches Beliar snooping around his wizard’s sanctum, as well as when the lad challenges Merlin’s magical prowess while he’s entertaining the Round Table Knights with sorcerous amusements. Merlin succumbs to the challenge, displaying some frightening magicks for which the knights rear back in terror. Beliar doesn’t flinch… he merely smirks. Merlin has shown his hand and let Beliar bring him into the infiltrator’s subtle manipulations. Things begin to escalate when Beliar provokes one of the knights, Sir Pellias, into a duel of words, which quickly escalates into a “trial of arms”. Pellias engages the young stranger in a fight with swords and shields, for which he gains the upper hand. The boy, however, has more than just physical prowess in this contest. With a stern look in his eyes, Beliar freezes Pellias in his tracks. Arthur and his knights stand stunned as Beliar launches himself at a transfixed foe, striking him down in a single, unopposed blow!

The death of a Round Table Knight weighs heavily on Beliar’s conscious, or so it appears. Queen Guinevere comforts the youth while he uses his subtle, secret powers to corrupt her to his control. The next day is the royal jousting tournament, to which Beliar has been invited. Gentle maidens cheer for their men of iron during a day full of games in the gleaming sun. By noon, Sir Lancelot remains the only knight who is undefeated, but suddenly an unknown knight (the reader easily guesses who this is) challenges him. The mystery opponent rushes into the match, gaining an advantage before Lancelot has even straightened his helmet. Lancelot barely has time to raise his shield before getting smashed to the ground, where his assailant immediately dismounts and gashes the knight’s shield with his iron flail. When the mystery man raises his helmet, we see that it is Beliar, who claims to have taught Lancelot humility this day. The king, however, judges otherwise, and Arthur banishes the youth from Camelot for his unchivalrous actions.

The next morning, Merlin is alerted to the overnight abduction of Guinevere, and he wakes the king with the news, blaming Beliar for the act. Arthur and Merlin ride out to find them, the wizard claiming that Beliar is the “greatest evil we have ever faced” and the king insisting that Beliar is “a common, mortal man… nothing more”. In their journey, they come upon an aperture between two great rocks and gusts of wind fling rocks out from the gap toward them with deadly force. Surviving that obstacle brings them to a stone bridge, which crumbles just after they barely reach the other side (but sadly before their horses can also reach safety). A few more hurdles are overcome by the duo, including a fire-breathing dragon, which turns out to be an imaginary enemy as long as they do not believe in it.

Finally, a great castle appears ahead, surrounded by fog. The heroes penetrate the shroud and find their way inside, seeing strange altars and statues before they find a descending staircase inviting them to proceed. At the bottom of their long descent, they find a subterranean world with pits of fire, smoking brimstone and not unlike their ideas of Hell, land of damned souls. Suddenly, they see Guinevere in the distance, shackled to the stone wall “like a common thief!”. The fires grow all around them and they are cut off from the royal abductee, finally to learn who has orchestrated the entire scheme. A bearded man sits upon a throne of stone and Beliar, his son, strides upon thin air through the flames themselves. He introduces himself as the “Prince of Evil”, who seeks Arthur’s death because he is a force for good in the world. 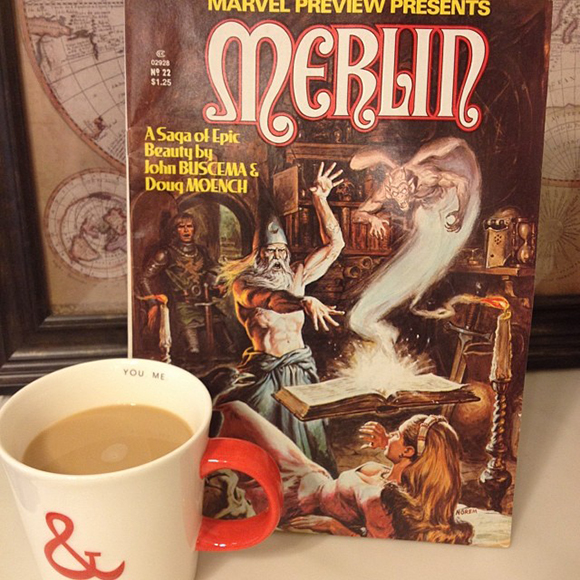 Arthur and Beliar square off against one another. Their attacks, counters and defenses seem nearly equal, but Arthur possesses the greater strength and fury due to his wife’s peril. His evil father gestures, adding his strength to Beliar’s sword, and Arthur loses the upper hand. Merlin counters with his own magic, adding strength to his king’s assault. While the blades are equal for the moment, Merlin’s fortitude eventually collapses before the lord of the underworld, and Arthur’s shield absorbs a powerful blow which fells the ruler of Camelot. When Beliar prepares to finish Arthur off, his father insists that Guinevere be brought near so Arthur can grovel and they can be slain together. Beliar obeys, and while he is retrieving Guinevere, Arthur begs that her soul be spared. The fiend laughs as his son brings the captive woman near, but then panics when he notices that Merlin has vanished from sight. Without pause or fanfare, the most stunningly unexpected event occurs as Beliar unsheathes his flaming sword and slices his own father’s head from its shoulders!

Guinevere’s stupor is broken as the magic keeping her docile is dispelled, but she is not the only one who is confused by the state of affairs. When Arthur questions Beliar as to why he would slay his own father, the answer comes in the form of a surprising transformation. Merlin’s face emerges from the young man’s form, and he explains how he knocked out Beliar (or perhaps killed, it remains unclear) when he went to free Lady Guinevere from her shackles. He then used magical illusion to take his appearance so he could approach the Prince of Lies unopposed. With their enemies defeated, the king, queen and wizard make their way to the surface, leaving the strange castle behind and breathing easy at the conclusion of such a great challenge to Arthur, Merlin and the Kingdom of Camelot.

In addition to the stunningly beautiful pages Big John knocked out for Quest of the King, other knights really carried their weight behind the scenes. Standard lettering was insufficient for a majestic tale with such regal imagery, so John Costanza incorporated ornate calligraphy for the caption boxes. Following the tale of Beliar’s otherworldly threat, Bill Mantlo delivers an essay which goes above and beyond his duty to the throne. He covers a well-researched array of historical and mythological information, breaking down the factual origins of Arthur and describing how the actual man would’ve lived and ruled, as well as how the legends came to be formed. He deftly separates fact from fiction and makes the chronicles of centuries from historical figures, nations and authors far more fascinating than any history class I’ve ever taken. Still, it should not be dismissed that the legends of Arthur and Camelot give us all an example to try and emulate, as well as a story to help define our struggles, fortunes and tragedies. While we may not have a Merlin by our side, we are all trying to find that queen for our kingdom while beating back the forces of evil. Fare Thee Well!