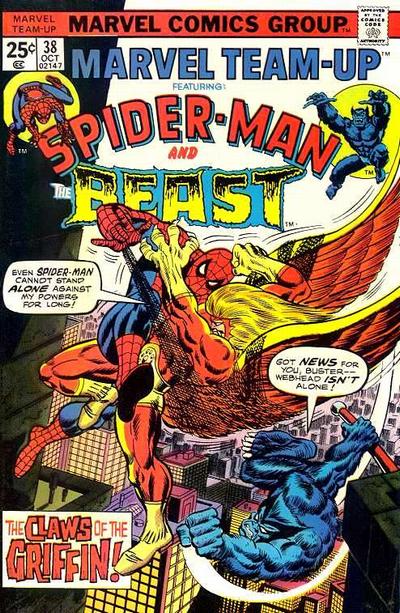 Q: What could be worse than a wet costume?
A: Wet costume covered by two kinds of wet fur!

After 45 of these columns, dear reader, I fear that I risk creating the impression that Comics ‘n Coffee is nothing more than a cultural wasteland. And so, it is with that concern that I attempt to elevate the discussion to one of refined taste and the utmost seriousness. And thus, the Spectacular Spider-Man (Peter Parker) and X-Man/Avenger Beast (Henry McCoy) elegantly adorn our sophisticated cover, where a powerful winged enemy boasts “Even Spider-Man cannot stand ALONE against my powers for long!”. As the fearsome foe battles Spidey in the skies above Manhattan, a blue-furred acrobat swings from a high-rise flagpole to join the fray, interjecting “Got NEWS for you, buster–Webhead ISN’T alone!”. With the excitement building before we’ve even seen page one, so begins “The Claws of the Griffin”, the first meeting of two of Marvel’s most popular heroes!

A typical day for our friendly neighborhood web-slinger goes a little sour as his expectations for clear skies become soured with a weatherman-defying rainstorm. The allure of swinging through the urban metropolis he calls home is about as soggy as his tights, so he decides to pack it in. Nothing is every easy for the wall-crawler, however, as his spider sense alerts him to a limp figure descending from the sky–an unconscious man in freefall! Spidey swings into the man’s path, snags him, tries to halt their descent, snaps one webline and misses another, and finally hits his target of a tanker’s smokestack only to smash into the tanker’s side before falling into the Hudson River, passenger in tow.

Long minutes go by and we fear that our hero may never rise from the depths, but after what seems like an eternity, we see his mask break the surface and suck in life-restoring air. There’s no telling how much the fall harmed the stranger from the sky, however, but suddenly a blue, furry arm is outstretched from the pier and helps Spidey get to dry(-ish) land. Spider-Man begins “Hey! I know you! You’re–”, to which his unexpected attendant replies “–the ever-beautiful, ever-battlin’, ever-lovin’ bludgeoning BEAST! At your service! You ARE Spider-Man, I presume?” With introductions made between Spidey and the off-duty Avenger, they turn their attention to the waking mystery man.

As he regains consciouness, the stranger explains how he’s the victim of a cheap hood named Johnny Horton, who ended up on the man’s lab table when an organization called “The Secret Empire” instructed him to turn Horton into a super-powered villain. He grafted Horton with clawed paw-like hands, eagle-like wings, a lion-like mane and super strength. Horton didn’t take the change lightly and blamed his surgeon for stealing his humanity. Calling himself “The Griffin”, Horton soon engaged The Beast and Angel of the X-Men, whereupon capture he continued evolving while in prison, gaining a spiked prehensile tail and even more enhanced strength. Escaping from his jailers, he confronted the scientist who turned him into a monster, carrying him high into the sky and dropping him to his falling death, which is where Spidey came upon the scene.

And his death is exactly what occurs, as the man succumbs to his injuries and the shock of events few minds can tolerate. As our mighty heroes ruminate on this tragedy on the pier, a winged form dives toward them from above. While his initial approach is to inspect the results of his murderous efforts, he now spots The Beast and finds a prime opportunity for revenge against the mutant who put him in prison. One of his new powers gives him the control over winged animals, so our heroes are soon engulfed by a swarm of seagulls. While Beast is the Griffin’s primary target, Spider-Man gushes his usual variety of non-stop jabber and witty barbs which distract the Griffin long enough for Beast to get the jump on him…literally! The two powerhouses wrestle mid-air for a moment, but the Griffin’s newly developed tail surprises Beast and sinks the mirthful mutant under the river’s surface.

As Beast struggles to escape drowning, Spidey finally wraps up the attacking seagulls in his trusty webbing and launches himself onto the back of the Griffin, riding the furious varmint broncobuster-style. He pounds upon his adversary with all his spider-strength, enough to force Griffin to release Beast. While Griffin deals with the wall-crawler, Beast rises to the surface and worries that Spidey is in for trouble as soon as the winged menace takes to the air. When he leaps after them, however, Griffin has already gained too much altitude for Beast to reach. He takes to the NYC landscape, bounding upon car hoods, then flagpoles and rooftops, trying to follow their path as Spider-Man rides Griffin’s back high above the Brooklyn Bridge, losing his advantage when Grffin’s tail yanks Webhead free and he smacks our hero down to his doom. 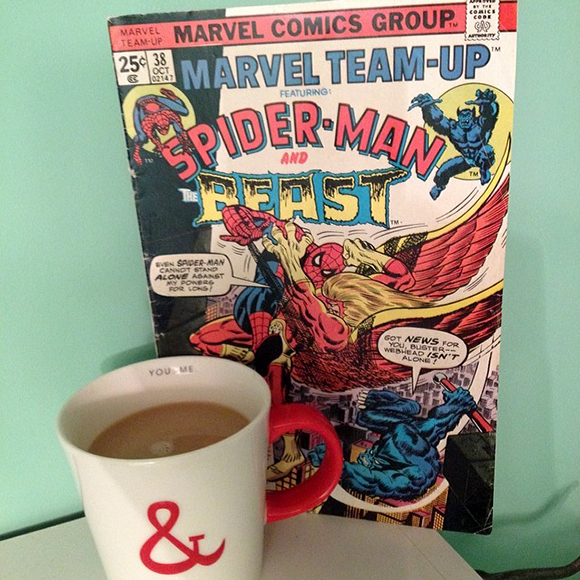 This time, Spidey doesn’t miss with his webspinners, successfully snagging the bridge’s supports and finding Beast waiting for him down below. Griffin decides that he’s had enough, so he dives at the duo at full speed. Our heroes are ready and waiting for him this time, however, and working together like a well-oiled machine, Spider-Man and Beast rear back at the incoming projectile and nail him with a two-man, home-run punch which knocks Griffin to the bridge pavement below and down for the count! Since the fracas has stopped traffic, New York’s Finest arrives to take charge and voice their appreciation for returning their recently-escaped prisoner. While this story has its fair share of banter, the staged humor is reserved for the conclusion as a rich old lady voices her displeasure for the traffic delay and insists that the officers force the superheroes to make restitution for her inconvenience. Her limo driver announces that it wasn’t the fight with Griffin to stop traffic, but a flat tire on their car, so she fires him on the spot in frustration. Spidey gets just a little annoyed at her behavior, and so he webs her feet to the road, swinging away with Beast as their business is concluded. When she demands that the driver help free her from the webbing, however, he has to point out that he’s helpless to do so since she just fired him.

Sal Buscema is one of my favorite all-time artists, and he definitely doesn’t phone it in with this issue. There is great pacing, exciting angles during action scenes, visually striking perspectives and facial expressions among all characters which let you know what each person is thinking and feeling. Mantlo does his normally solid job of characterizing the entire cast, but especially so with the banter. As the issue goes on, the chemistry between Spidey and Beast gets progressively more fluid to where they work together like an experienced team to take down a more powerful enemy, feeding off each other’s wise cracks the enitre time. This creative team touched on many themes, including tragedy, peril, humor, revenge and camaraderie in a well-crafted one-shot story. I have no idea who decided this whole tale should take place on a rainy night (with the storm lasting all issue long), but it definitely adds a sense of realism to the story. New York City is flushed out in great detail within many Marvel titles of this era, and this one covers many familiar NYC locations along with something as simple as rain, which is a fact of life for city dwellers, but seldom among comic book heroes. Hopefully, as each of you true believers enjoys a cup of java and some great comics this day, you’ll be doing it without the same precipitation soaking Spidey’s costume and Beast’s fur. Fare Thee Well!

Marvel Team-Up featuring Spider-Man and The Beast is written by Bill Mantlo, penciled by Sal Buscema, inked by Mike Esposito, lettered by Karen Mantlo, colored by Janice Cohen and edited by Marv Wolfman, with a cover by Ron Wilson, Mike Esposito and Gaspar Saladino (1975).