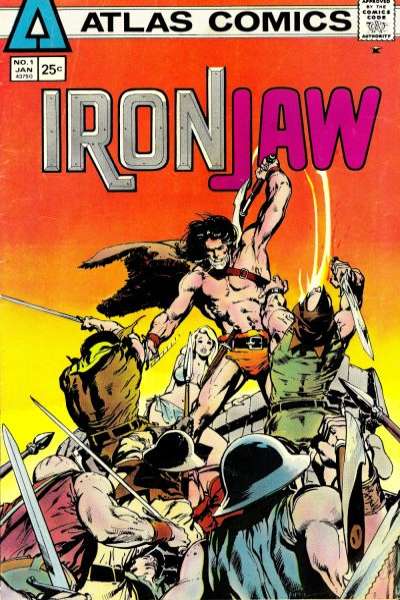 Have you ever had the literary version of a steaming turd in your hands, only to marvel at its awfulness? It goes without saying that there are a lot of bad comics out there. Just look in the 25 cent bin at any comic book shop and you’ll find plenty of issues so horrendous that stores can’t even give them away. Occasionally, however, one pops up which forces the reader to simply beg the question: “what were they thinking?” In 1972, Marvel Comics founder and magazine publishing mogul Martin Goodman left Marvel and launched a new company, Seaboard Periodicals. With the help of Roy Thomas and Larry Lieber – Stan Lee’s brother – Goodman offered high-paying jobs to such names as Steve Ditko, Wally Wood, Howard Chaykin and Rich Butler. The story of Atlas/Seaboard is incredibly fascinating (and easily accessible by a simple online search), but today we are here to shine a light on the dystopian future which is inhabited by a savage known only as IRONJAW.

Long after man polluted the seas, ravaged the Earth and nearly destroyed himself, we find ourselves in a world where the remnants of man survive by their wits and skill with a blade. Fans of sword and sorcery fiction might mistake this for a fantasy realm populated by elves and dwarves, but this is our world in the far-flung future! Ironjaw is a man who is exactly how he is named, that is, a Conan-esque barbarian whose lower jaw is made of metal. While exploring far from his home, he spies a woman and old man fleeing from a half-dozen armed riders. We immediately get a sense of their intentions as one rider orders, “Save your net for the succulent wench! An old buzzard like this is fit only for use as a target!” Ironjaw cares nothing for the man, but thinks the girl will make a good companion, so he decides to intervene, but not before the old man dies from a rider’s arrow. “I will have to take her from those men, and then see to it that she thanks me properly!”, he thinks as his unicorn trots closer and he draws his bow. After felling one of the men, he quickly dispatches the rest with his sword-wielding prowess. All except for one, who rides away safely.

The woman assumes that Ironjaw must be part of the local rebellion to have saved her from the soldiers. He immediately dismisses her assumption and forces her to join him atop his unicorn. She asks “Don’t you even want to know why those soldiers were after us?”, to which he responds “No! But you are a woman, and so you will tell me because women are unable to keep silent!” While they ride off, the soldier who got away safely has returned to his home, reporting what he has seen to the king. His report on the man with a jaw of metal and a bird-shaped birthmark on his shoulder interests the king greatly, and so his highness decrees a bounty on the barbarian to be captured alive.

Meanwhile, the charms of our savage friend have been highly effective on his lovely captive, as they canoodle together in a hidden cave. “At first, I thought I would hate being here with you! But now I…” she confesses, to which Ironjaw replies “You are just like all women, never knowing what you really want!” Soon later, the king’s soldiers track down the two lovers, capture them and bring their prey back to the castle. Ironjaw doesn’t blame the woman, however, but himself for heeding “the counsel of women”. The soldiers throw each of them into separate cells, barking at the woman “In you go, slut! Tomorrow we feed you to the bears!” 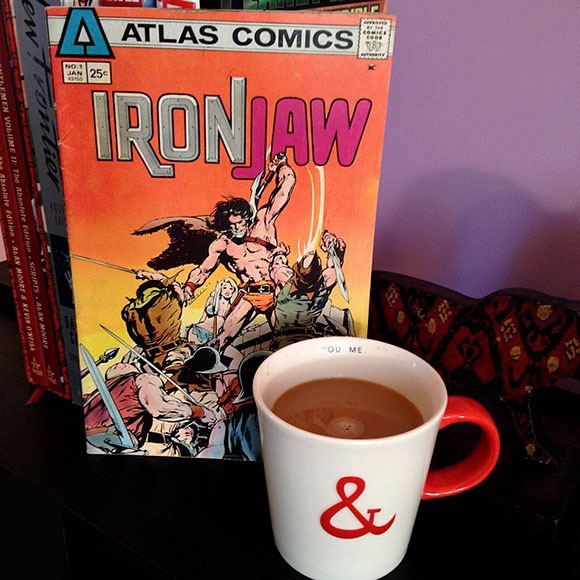 When the men report their success to the king, a young lady eavesdrops outside the king’s chambers. This is Princess Elena, daughter of the queen, and she heads straight down to the prisoner cells when she overhears that a man bearing the royal birthmark is being held. The princess orders the jailer to open the door to speak to Ironjaw and our savage hero likes what he sees entering his cell. “Aha!”, he excitedly says, “So they have sent me a lovely wench to help ease the boredom of my final hours?” As she tries to resist Ironjaw’s advances, she sees the birthmark on his shoulder that she also shares, confirming that he is her brother. Elena slaps him in the face, which earns a smile from the savage, “Ahhh! I like a woman with spirit! For the wilder the filly, the better the ride!”

The guard rushes to her aid, knocking Ironjaw to the floor with a slam to the back of his head from the iron keys. When he awakes, he finds a blade left behind by the princess and quickly comes to the conclusion that “my proud filly thought my dungeon cell too inhospitable and would rather we renewed our acquaintance elsewhere!” He lures the guard into the cell and dispatches him easily, along with the other guard outside, all the time running an inner monologue as to how he’s been forced to weild such a poorly balanced and inferior knife. As he uses a rope to climb down from the jail tower, he realizes that he has forgotten that his “blond-haired wench is still imprisoned inside that dungeon”, and so he decides to re-enter the castle to get her back. And so concludes Ironjaw #1.

I’m happy to report that Ironjaw only lasted four issues before Atlas Comics fell apart, and in none of those other comics did our hero do nearly as much raping and kidnapping. In fact, Atlas decided to try and reinvent his character before the series was all said and done. One of my favorite black-and-white artists, Pablo Marcos, joined the series after issue #1, where Ironjaw’s appearance slightly changed so that his entire jaw became made of metal, not unlike Trapjaw of the He-Man universe. Needless to say, Ironjaw is one of the most misogynistic characters ever rendered on the comics page, but creator Mike Fleisher believes that “what he thinks, what he says, how he reacts … a real man, placed in that same situation, would do.” I’m curious just what kind of people Fleisher was hanging around with in those days. And so as the saga of Ironjaw begins, we get a hero who would be perfectly cast as the villain in a thousand other tales. As I explore the Bronze Age of Comics, I take great pleasure in bringing you fun and amazing stories, true believers, but I also an burdened with the glorious purpose of sharing the mewling quim known as Ironjaw. Fare Thee Well!

IRONJAW #1 is created and scripted by Michael Fleisher, penciled by Mike Sekowsky, inked by Jack Abel, lettered by Alan Kupperberg and edited by Jeff Rovin with a cover by Neal Adams.