We hope you had a great week and now it is time for you to enjoy Sebastian,Sheldon and Simon’s Top 5 from last week and then take a listen to the Pick of The Week Podcast later today to hear more thoughts on each book that they picked! It is just that simple! So enjoy the books every week at your favorite community for comic news, reviews, podcast and more only here at Comic Impact! 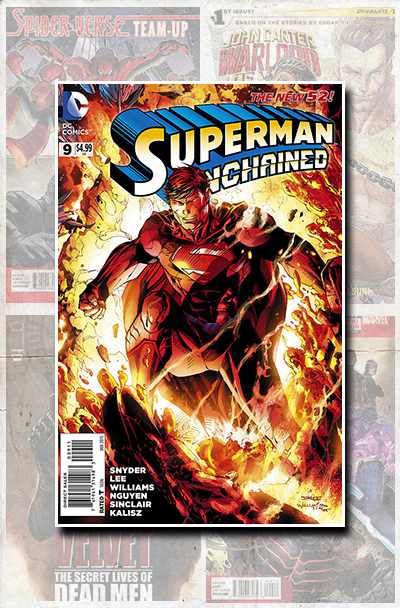 John Carter: Warlord of Mars #1 – By Ron Marz with artwork by Abhishek Malsuni

John Carter: Warlord of Mars returns in a new monthly series, officially authorized by Edgar Rice Burroughs, Inc.! Superstar writer Ron Marz finally gets to pen the series he has always wanted to write, with amazing new art talent Abhishek Malsuni joining him. Return to the exotic landscape of Barsoom, as John Carter has to save his adopted world, not to mention his beloved Dejah Thoris, from an enemy like no other he has ever faced. John Carter must truly become Warlord of Mars against an adversary who is every bit his equal on the savage red planet. An amazing new era for John Carter of Mars starts here!

Which is obvious from the title!

This is it – the extraordinary finale of Scott Snyder and Jim Lee’s Superman saga, surrounded by an epic wraparound cover! It’s a battle in the sun as Superman and Wraith accept their destinies…and Lex Luthor pulls the trigger on his ultimate weapon! 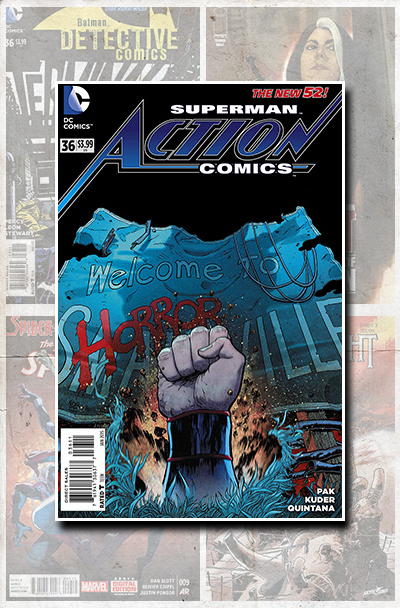 Action Comics #36 – By Greg Pak with artwork by Aaron Kuder

A new epic begins! The deck is stacked against Superman when Smallville is poisoned by the appearance of dark magic and ancient horrors! Can Superman figure out what’s going on and save his hometown before this evil epidemic spreads across the entire world?

• When a force of evil threatens spider-characters throughout the multiverse, EVERY SPIDER-MAN EVER is needed to save the day!

What is the line between fantasy and delusion? In the aftermath of last issue, the Rhodes family is looking for answers…and nothing is what it seems.

In “Terminal” part 2, Batman’s efforts to stop a contagion at the Gotham Airport come crashing down!

This issue is also offered as a combo pack edition with a redemption code for a digital download of this issue. 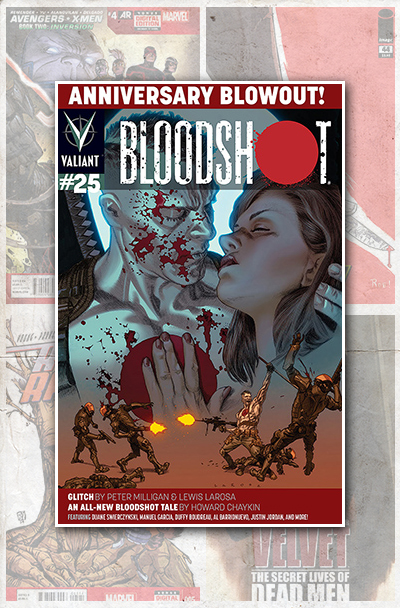 Meet the man behind Bloodshot – or is he? – when one soldier’s untapped killer instinct takes over in a feature-sized lead tale of blood, guts, and heart by Peter Milligan and Lewis LaRosa! PLUS…an all-new story by comics master Howard Chaykin! The original BLOODSHOT launch team of Duane Swierczynski and Manuel García join forces once again for a brand new adventure! AND…Duffy Boudreau and Al Barrionuevo take you on Bloodshot’s journey from the end of the line with H.A.R.D. Corps to the Colombian jungle where Unity found him!

Chew #44 – By John Layman with artwork by Rob Guillory

“CHICKEN TENDERS,” Part Four Warning: Sissies will need an adult diaper before reading this one. No joke. No lie. This will be the most talked about issue of CHEW in years.

• As seen in the blockbuster Marvel Studios film, Guardians of the Galaxy, Rocket and Groot are back!

• It’s the breakout hit series of the summer! As their space adventures continue, find out why Rocket Raccoon and Groot are quickly becoming the hottest characters in the Marvel Universe.

• How does the most dangerously daring critter of the cosmos get the bad guys? With his two best friends: Guns and Groot!