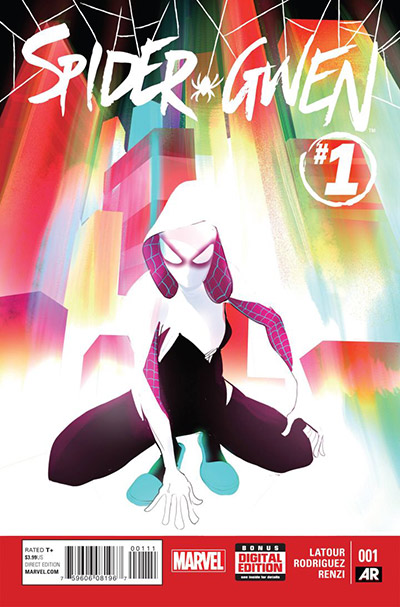 This rare situation was more than happenstance that no one could have predicted. The fans sounded off and the Marvel powers-that-be brought what readers wanted into fruition. When Gwen Stacy, as Spider-Woman, was first announced to appear in the Edge of Spider-Verse #2 one-shot, the growing excitement around the idea of this “new” character was undeniable. The internet was flooded with fan art and cosplayers clamored to have Gwen costumes ready for their next convention, even before her she had appeared in the actual Spider-Verse issues. So when it was inevitably announced that Earth-65’s Spider-Woman was getting her own series, the fandom took on a life of its own.

Edge of Spider-Verse #2 laid out the basics of the alternate universe where Gwen Stacy was bitten by the radioactive spider and became that universe’s Spider-hero. Probably the most effective change to her origin was the way Peter Parker became both Gwen’s first major villain and the defining, Uncle Ben-style tragedy of her life. Rather than waste time rehashing that setup, Latour and Rodriguez pick up where Spider-Verse left off and launch right into a new series of conflicts for Gwen. Latour continues to expand and define this Marvel Universe and plenty of familiar faces show up, but not as we have known them in the past. In this world, Matt Murdock is an evil lieutenant of the Kingpin, Ben Grimm is a police officer, and Frank Castle is the new captain of the police task force whose job it is to hunt down Gwen. Gwen’s father is trying to come to terms with what he knows about his daughter and her old band, the Mary Janes, need her back because they’ve failed to find a replacement. In the midst of all this we’re introduced to Adrian Toomes, a.k.a. the Vulture, and Gwen knows that stopping this new threat might be the first step in redeeming her reputation as a “super villain” in the media. As we know, things rarely go so smoothly.

Originally, Marvel had banked on Silk becoming the break-out new female character of the Spider-Verse, and Dan Slott had only briefly mentioned that there should be a Gwen Stacy tie-in. When Spidey’s Senior Editor, Nick Lowe approached Jason Latour, he gave him full creative freedom to write whatever he wanted, with the exception of Uncle Ben. It was fate that Slott’s brief suggestion came up in their discussions and Latour, with the help of his artist, Robbi Rodriguez, were able to flesh out the intricate world and back story. Robbi’s design for Gwen is one of the best new costumes I’ve seen in a while. It’s absolutely minimalist and functional, but screams out and grabs your attention. Rico Renzi’s colors round everything out perfectly, giving Gwen her own, unique character and doesn’t come across as one of the countless, typical Spider-variants. I’ve seen a lot of recent Marvel books attempt an edgy, youthful approach to superhero storytelling, but Spider-Gwen is more successful than most. Because of the freedom of an alternate reality, Latour seems to be able to let more of his natural humor shine through. Something that had to be toned down for books with more known constraints like Winter Soldier or Wolverine and the X-Men. Even his creator owned series with Jason Aaron, Southern Bastards, seems tightly scripted and more grounded in reality. But here Gwen is able to have her own set of hang-ups and her own brand of humor. If you were fascinated by Spider-Gwen’s debut last year, you’ll definitely want to check out this first issue. Latour succeeds in establishing a compelling heroine who is distinct from any other Spider-Person or Animal. It’s almost as if Gwen finally gets the redemption she’s been owed for decades as the original “fridged” character.