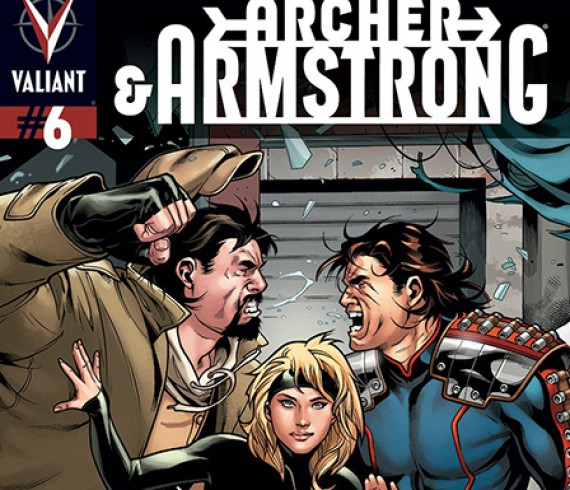 by bucky· January 22, 2013· in Reviews· 0 comments tags: Archer and Armstrong, Emanuela Luppacchino, Fred Van Lente, Valiant
Archer and Armstrong #6 brings a feminine touch this issue with the introduction of the New Geomancer but don’t worry Fred Van Lente and Emanuela Luppacchino continue to expand The Eternal Warriors past while letting us see how deep down the rabbit hole The Sect go. Valiant continues to be stead fast in developing every inch of its burgeoning universe. Archer and Armstrong have already offered so much with the Sect,The Boon, The Eternal Warrior and now they continue this by introducing us to a new protector of the Earth called The Geomancer. We are also introduced briefly to the swashbuckling time period had by The Eternal Warrior.While this issue wasn’t overflowing with our favorite odd couple of Archer and Armstrong it does do an awful lot of character and world building in a excellent manor. Read More

by Simon Daoudi· January 17, 2013· in Interviews, Podcast· 0 comments tags: Archer & Armstrong, Fred Van Lente, Valiant
Did you know that January is the Month of Valiant here at Comic Impact! On that note Join Simon as he talks with Fred Van Lente head writer of Valiant’s smash hit Archer & Armstrong. Simon and Fred take a look back at Archer & Armstrong’s first story arc as well as talk about the differences with Archer & Armstrong now than from the 90’s. Find out how films such as Indiana Jones made an impact on this book, we also get some clues about the Eternal Warrior story arc and the future of the book. The topic of digital comics and Kickstarter also comes up and the boys talk about their love of Jack Kirby and Fred talks to us his other project, the upcoming G.I Joe from IDW coming next month. Did you know that Archer & Armstrong will link up to other Valiant titles?I guess your just going to have to listen in to find out how! Read More