by Simon Daoudi· May 02, 2014· in Pick of the Week, Podcast, Reviews· 0 comments tags: Dave Meikis, Guillermo Ortego, Jim Cheung, Juan Vlasco, Mark Morales, Mark Waid, Marvel, Marvel Comics, Original Sin, Paco Medina
Join Simon and Sebastian as Sheldon is camping out for the amazing spider-Man 2. The boys talk about last weeks comics. Sebastian had the pick and he went with Original Sin #0 By Mark Waid with art from Jim Cheung and Paco Medina from Marvel comics.The boys also talk about Star Wars Legacy II #14,Secret Origins # 1 and that’s not all. Simon is still thankful for Teenage Mutant Ninja Turtles from the people over at IDW. Sebastian tells you why you need to be reading Elektra and both the boys talk about the future of The Walking Dead now that ALL OUT WAR is done. Find out more about Simon’s top secret project that goes live this weekend and more on this weeks pick of the week podcast. Read More 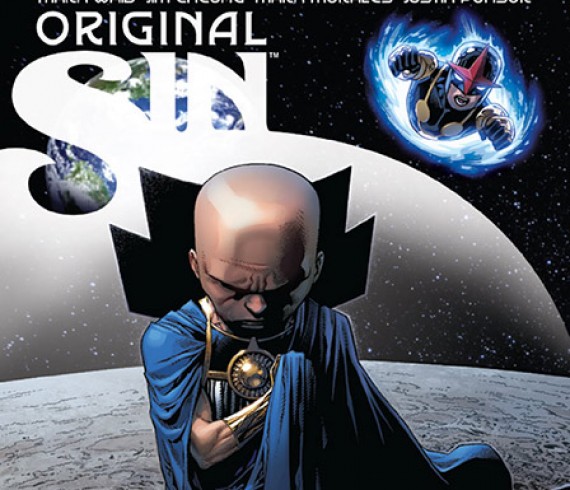 by bucky· April 29, 2014· in Reviews· 0 comments tags: Jim Cheung, Mark Waid, Marvel, Marvel Comics, Original Sin, Paco Medina
Original Sin #0, written by Mark Waid with art from Jim Cheung, Paco Medina and a bevy of inkers, opens up the previously unknown origin of Uatu, the Watcher. Waid uses Sam Alexander, the current Nova, as the point of view character. Still relatively new to the cosmic universe, Sam pays a visit to The Watcher’s moon base in hopes of learning more about his mission and his motivation for being the universe’s biggest voyeur. Waid delivers a clean, comprehensive look at Uatu’s own “original sin” that adds an undeniably heart-string-tugging human element to the entire story. There’s also a pretty big revelation about the character as we learn he’s watching a lot more than we ever imagined. As far as introductory issues go, this was nearly perfect. Read More